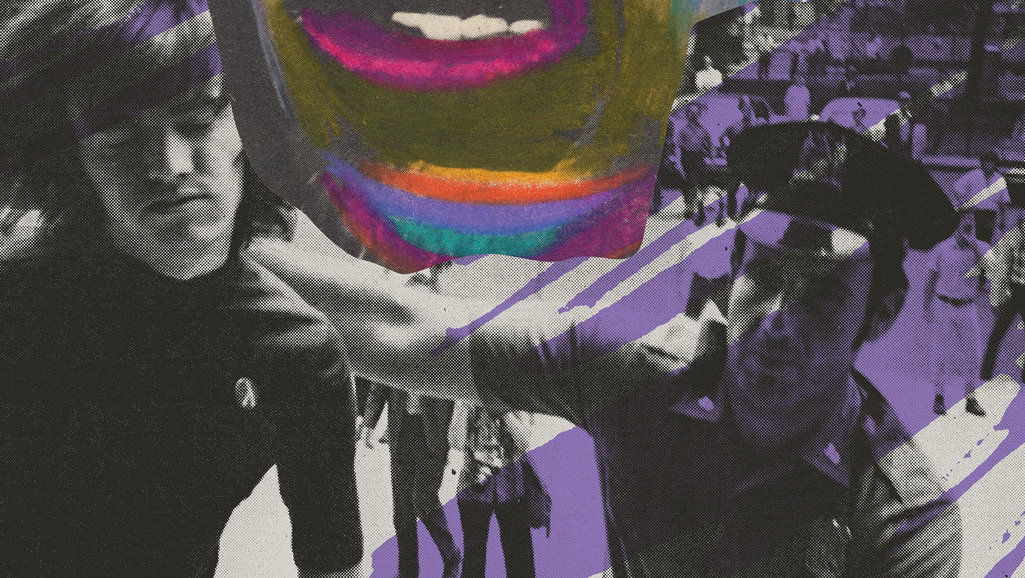 Some songs burrow into one’s subconsciousness, crawling in through the ear canal and settling in some unfindable fold or between two deep synapses. These earworms are not parasites, as they ask for nothing from the host. They exist in the mind only to poke their heads out into the conscious realm, emerging as toe tapping, head bobbing, lip-syncing while one is stuck in traffic or in line at the grocery store, far away from and long removed from the original song.

The vast majority of bands of most genres can pray for one great earworm in their career. Really good bands might manage one per album. Pop music labels outsource the hit-making to songwriters who won’t ultimately perform the songs. And then, on only rare occasions, one finds a band like Public Opinion, for whom every song belongs on the Billboard Top 40.

Perhaps there was some kind of Robert Johnson-style deal at some crossroads that managed to imbue the members of Denver’s Public Opinion with this seemingly magical ability to craft songs that live with the listener long after the music has ended. Perhaps the band, who all contributed to the songwriting process, possess such a special chemistry that they just produce fireworks every time they combine their elements. Whatever the case may be, the band is raising the bar for so many other bands in this style of post-punk that is on the rise in hardcore circles right now.

Along with Militarie Gun, whose mastermind Ian Shelton had a hand in producing Modern Convenience, Public Opinion seems to be leading the charge of bands who have taken the Faith path rather than the Void one, bands whose musicians often come from more of a hardcore background and for whom Dischord-descended post-punk offers a fresh palette of colors with which to paint their aural landscapes. Combining the melodic brilliance of The Breeders with the hard-edged neo-garage rock of the early 2000s and the post-hardcore/proto-emo of bands like Dag Nasty, Public Opinion composes songs that simultaneously exist as carefully polished gems and free-wheeling positive energy eruptions. It’s no wonder that, considering the punk pedigrees of Public Opinion’s members, they are often situated beside more straightforward hardcore bands during their live performances, and their warm, jangly guitars and honest, personable vocals offer moments of guard-lowering unity to crowds whose usual mode of musical appreciation is through moshing. Concertgoers who, minutes before, were throwing elbows and cartwheeling with heels aimed at heads suddenly find themselves in sweaty embraces, draping arms over each other’s shoulders and jumping in easy rhythm to songs that we didn’t know we needed, songs that would have made our younger years more carefree, songs that heal.

Listening to Public Opinion’s Modern Convenience is like drinking a towering glass of water after days lost in the Sonoran Desert. The melody’s get into our tissues, and lyrics speaking to the universal experiences of loss, addiction, escape, modern music culture, and the mundanities of small talk all make us feel understood, make us feel less alone.

Public Opinion’s Modern Convenience is more fun than many bands allow themselves to be. It is exceptionally well-crafted, making tough songwriting seem like the easiest thing in the world. Most of all, it is healing, at a time when we can all use as much help as we can get.

Who is in Public Opinion, and what are other projects are they a part of?

Public Opinion is a project that out of necessity has turned into a collective of sorts. Across the members that have participated in the live band, our other bands include Destiny Bond, Chopping Block, Community Gun, Back Of A Car, and a handful of others I’m certainly forgetting.

How did you approach following up 2021’s acclaimed Pay No Mind? In other words, what was the writing process like for Modern Convenience?

I wrote the songs for Pay No Mind by myself in my apartment with computer drums and a practice amp, but Modern Convenience was written as a full band with Antonio, Sebastian, and Brent who performed on the record. The tape was much more straight forward in that I just showed them the songs and they played it exact. This last record had a lot more checks and balances, and had a lot of asking “does this sound like Public Opinion or not?” In my opinion, the record is a lot better because of it.

I think the obvious influences are things like The Hives and Bloc Party while also having a lot of Stooges and older punk in the sauce too. Lyrically, I didn’t take much influence from anyone, but I’ve been told the way I sing is a lot like if Wes Eisold fronted a garage rock band. I love AN so that’s alright with me.

Hardcore seems to be much more inclusive of melodic elements, and post-punk and indie seem to be in the ascent. Why do you think these have been gaining so much favor lately?

I’m not really sure. I can acknowledge there’s a lot more crossover between straight up hardcore and maybe less sonically aggressive music, especially with touring bills like Drug Church taking out One Step Closer or Citizen and Militarie Gun going out with Restraining Order. I’m sure we could point to Turnstile and say their responsible but I think that’s painting too broad. Straight forward hardcore kids are a dying breed, I guess.

How has it been playing for hardcore crowds? What about for indie/post-punk crowds?

Playing with hardcore bands usually feels better as it may be where we as a band have spent more time at those kinds of shows growing up. That’s typically a harder sell for audience though. Playing with indie bands feels good just because we come off like Slayer compared to everyone else.

These last two releases have been through Convulse. How did you connect with Adam, and what has it been like working with Convulse?

Ian from MG / Regional Justice Center hooked that up. I flew to LA to record demo versions of the songs that became the Pay No Mind, which was the same weekend we recorded the SWAT tape that Convulse also put out. He took the songs and mentioned it to Adam, and when the real recordings were done Ian sent those over. I love working with Convulse. I help out Adam with releases and mailorder and things like that since moving to Denver, and he’s become one of my best friends. Shout out to the king.

How did you connect with Ian? Can you describe that collaboration?

I met Ian when I was 16 or something and we’ve just always run in similar circles. When I first moved to Seattle we started hanging out more regularly and started a band that never came to fruition. Since then, we’ve just kept in real close contact about bands and music and whatnot. I absolutely text him more than I text my girlfriend haha.

What should people know about Public Opinion? About Modern Convenience?

If you live in the continental states, we’re probably playing your town this year. Consider attending.

Thanks for the interview! Shout out again to Convulse Records and Proper Crooks.

Be sure to check out Public Opinion on their current tour.

The Modern Convenience album art is by Zachary Hobbs.

It was produced by Ian Shelton and Phillip Odom.

It was recorded and mixed by Phillip Odom.

It was mastered by Nick Townsend at Infrasonic Sound.

In this article:Featured, PUBLIC OPINION