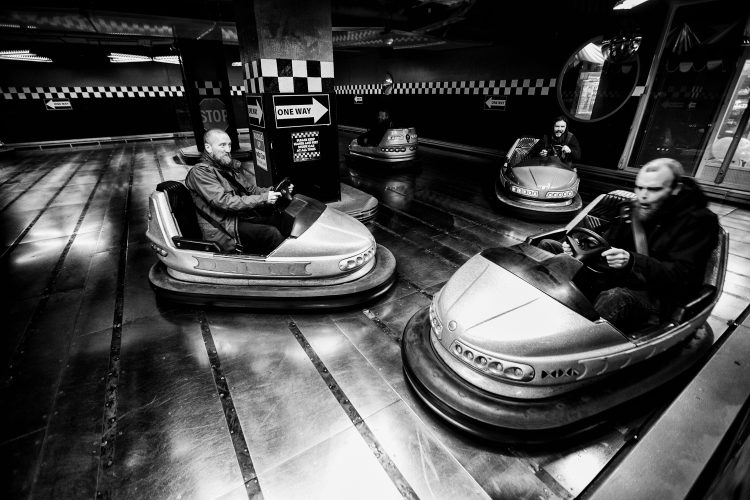 All photos and text by Bobby Cochran

A lot has changed in the world of Amenra since their last full-length US Tour almost a decade ago.  They’ve become huge in Europe, playing top slots and festivals and filling large halls wherever they play. They’ve also released some of the most groundbreaking and unique albums of the past 20 years, raising the bar and setting standards difficult to surpass.  But here they are, packed in a van and spending a month driving from coast to coast, playing first of three bands on a package tour also featuring metal granddaddies Voivod and Psych-Doom masters Yob.

I hadn’t been on a month-long tour in over 25 years, and I wondered if my middle-aged ass was too delicate for this kind of road-dogging.  Knowing the Amenra guys are close-ish to my age and having traveled with them a bit already, I didn’t think I was gonna crash and burn.  But strange things can happen on the road, and there was no way to know how things would turn out.

The band flew into Chicago during a brief break in the winter weather, collecting some equipment, checking out the Chicago Music Exchange and renting a van for the tour.  We spent a day driving to Minneapolis, where we picked up our merch, visited an amazing record store, ran some more errands, then bedded down for the night.  The next day we headed to the venue where the bands got acquainted and figured the sharing of equipment & technical stuff. The sold out show was an excellent way to start the tour.

The next couple of days brought us to Thalia Hall in Chicago (a beautiful theater) as well as Columbus and Cleveland OH. Huge halls to tiny clubs.  Rain and cold to sunny and mild, back to cold again.  We fell into a groove pretty quickly since these have the touring game pretty well dialed.  Audiences filled up early and there was a clear presence of sizable amounts of Amenra fans.  They have a visual presentation that’s ideal for large spaces, but those dudes will make it work no matter where they are.  I’m also impressed that immediately following every performance, vocalist Colin van Eeckhout heads directly to the merch table to shake hands and sell shirts, which he does every night until closing time.

The gang jumps across the border for a show in Toronto, and everyone is fairly surprised that we spent a grand total of 10 minutes at the Canadian border and were let across without incident.  We prepared for searches and paperwork scrutiny, but that didn’t happen.  Pulled up to the Phoenix Theater and unloaded just as it started to rain, with snow not far behind.  Another big hall tonight, and a huge presence of Amenra fans.  We had a short drive between Toronto and Buffalo, so we took the opportunity to visit Niagara Falls and the nearby Disneyland-themed town of Niagara.  The falls were gorgeous even though it was snowing and cold as shit, but the town was pretty bizarre.  Fairly empty and closed down due to it being off-season, we could only imagine how crazy it gets when the weather is better.  We paid $10 to visit a moderately scary haunted house and a few of the dudes took some rounds with bumper cars.  Good times.

Another big hall and great show in Buffalo NY, then a day off in the charming town of Portland Maine.  East Coast small town vibes, with great places to eat and get coffee and relatively mild weather for this part of the country at this time of year.  The show was in a tiny venue with a sort of free-floating box for a stage.  It totally worked, but it was pretty weird.  The next night in Boston was at the other end of the spectrum.  A huge hall with a great crowd.

New York City was a high point on a few levels… the weather was awesome, we had time before soundcheck to walk through the neighborhood and down to the Hudson river for some photos, and tonight’s crowd was fucking stoked for each of the three bands.  The owner of the venue was quite happy with almost selling the show out, so he let everyone stay after closing time to party and celebrate.  Let’s just say it was a late night for drinkers and non-drinkers alike and leave it at that. We limped out of New York the next morning and jammed down to Philly, where they played a sizeable venue that looks like it used to be a train station.   Maybe it actually was a train station… I dunno.  A great show all-around with a packed crowd.