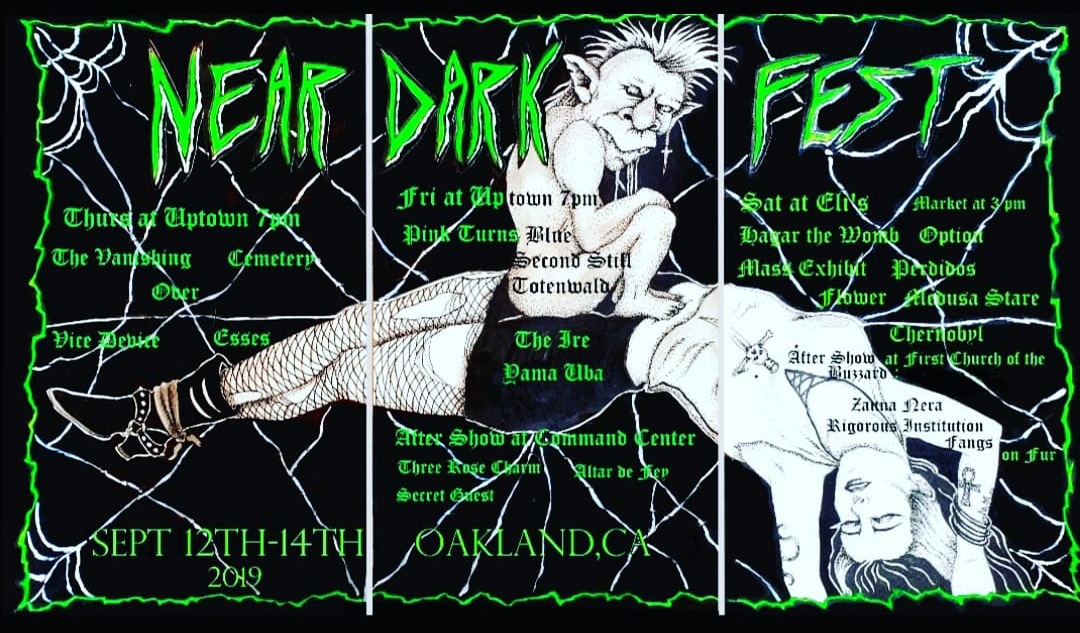 The time has come yet again to don your rarest dangler, clean the cat hair out of your chorus pedal and read as much Tiqqun as possible. Oakland’s Near Dark Fest is on its third installment and is guaranteed to plunge your psyche into an abysmal, anarcho death-disco. Boasting international and local reunions, shadowy mainstays, and a splash of virgin blood, it’s gearing up to be the emblematic rugged goth fest of the year. Let’s take a look at a few of the headliners.

The Vanishing are a trio from the early 2000s SF who are noted for their unique blend of upbeat dance beats, shouted vocals and desperate saxophone lines. This intense concoction induced a certain gravity to the picture they painted and nothing sounds quite like it. While only active for a handful of years, their recorded output was prolific and they all went on to stretch their musical skills with other projects. Sensing this modern crest of the contemporary fierce rocker wave, they’re reuniting for their 20 year anniversary reunion show and we couldn’t be more elated.

Everyone’s favorite sullen post-punk band of Berlin’s late 80s, Pink Turns Blue, are at it again with a world tour, making a headlining stop in Bump City for this cruel weekend. Known for cranking out hit after hit in a genre that conjoined new romantic’s brazen affection with darkwave’s pessimistic loneliness, they’ve become an institution in the umbrella of all things bohemian and despairing. Let their mid-tempo crestfallen elegies guide you to the next hopeless night of dejection.

Literally formed in the toilets of the Wapping Anarchy Centre in 1980, Hagar the Womb are one of the original anarcho-punk bands of the first wave of the movement. Originally formed as an all-female response to what was seen as a male-dominated uprising, they experimented beyond the bounds of conformity that otherwise defined such an “anti-conformist” subculture. Often chaotic, their music employed liberal use of unison chants, stark tempo changes, and the grating, angular guitar leads generally associated with the genre. They reunited as a result of resurgent interest earlier this decade and we’re blessed to receive them.

Another Bay Area native group hearkening back to the dawn of deathrock itself, Altar De Fey were pioneers of the goth punk sound. Anchored by the swirling, screeching guitar lines of the legendary Kent Cates, ADF laid dormant for more than a decade before being asked to reunite for a festival in 2011. Since then, six recordings have been released from past and present as fans chomped at the bit to blast them at home. Known for their high energy live shows, this veteran group of vampyric victors will damn the audience to an eternity in the ungodly shadows.

Hailing all the way from Berlin itself, Totenwald is the latest in death punk revival and clenches the listener right loins. Also employing a sax to do the outfit’s melodic dirty work while the strings crunch away classic staccato attacks over straightforward back beats. Vocalist Trish’s voice is incredibly moving as it ventures in and out of belts and sneers, often with the aid of the rest of the gang behind it. This is their first US tour and one would be remiss to skip out on them.

While there are plenty of bands that don the same moniker, the contemporary Cemetery is all we concern ourselves with. Considered to be an early forerunner in our current state of spooky punk affairs, this clan of crusty phantoms have been spewing top notch electric dust since their early days in a South Chicago basement. More than eager to share their general alienation with this shit world and crush us repeatedly with fast-paced haunted fury, the pleasure is all ours. Catch this blistering mystery as they make a rather rare appearance out of their cave, they’re not exactly easy to pin down.

If a preview of that magnitude isn’t enough to roust you out of your forlorn summer hibernation, nobody can help you. Get your tickets here and below is the full lineup:

Hagar the womb UK (First & Only US show) Option (Boston)

[The tour poster was created by Pasha Lenee]