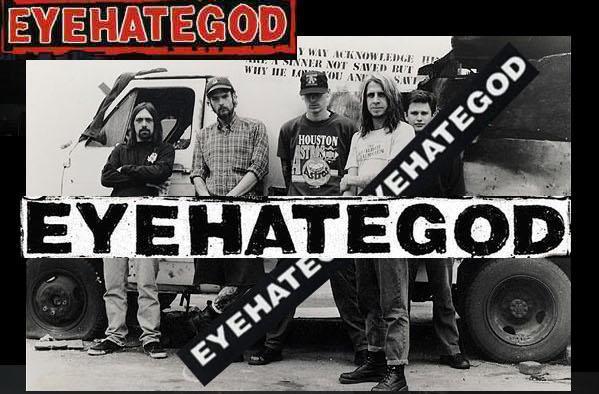 “This interview Was done in july 2008 for a past fanzine I’ve done For a Few years called Expired No Hope. I think it’s still interesting to read Some words from MIKE WILLIAMS, singer for the New Orleans sludge legends Eyehategod. Enjoy! (Raph Gordon) “ THIS INTERVIEW WAS TAKEN FROM  Sex Before Suicide

Hi! How are you? Could you introduce yourself and your bandmates quickly? The core of EyeHateGod is and will always be;
-Jimmy Bower – Four string Sonex guitar & feedback (also of the bands Down, Crowbar, Corrosion of Conformity, Superjoint Ritual etc …)
-Joey Lacaze – The UnaDrummer (also of the power electronics project Hypo-Stigmata and southern rock band Clearlight)
-Brian Patton – 2nd fuzz six-string noise (so another band called Soilent Green)
-Gary Mader – Bass player (also in Hawg Jaw)
-Mike IX – Stolen property and laryngitis (also in the bands Arson Anthem, Outlaw Order , Guilt Of …)

It’s been 20 years this year that you exist. Are you going to do something to celebrate?We’ll be doing some shows and hopefully putting out our 20 year anniversary DVD called ’20 Years of Abuse and Still Broke ‘if time allows. We are forever compiling and accepting footage for that. As far as it is going to be, it’s going to be a lot of things going on, but we are 100% dedicated to EHG.

You must have lived weird things in 20 years. Does your mentality changed? You seem to have much hatred. The attitude never dies is all I can say. Once the passion for music is in the blood it’s a matter of even wanting to change, its impossible from that point on. Whether it’s punk rock / hardcore / blues or whatever-it’s in it for life I believe. the world is always continually fucked up so the hatred never really diminishes.

I ‘ve read somewhere That at the Beginning of the band You Were homeless or something like that, sure it Would Be hard to live … How did it happened to you? And how are you now? Are you getting old? haha Well shit happens. The circumstances of my life are too detailed to explain here. It will be in my next book one day soon. My first book is called ‘Cancer as a Social Activity’ and has some of my personal thoughts on poverty, drugs, love, living on the streets, shopping, jail and on and on.That’s definitely not the first time I’ve been without a home, when I was 15 years ago, I went to California to get into the underground and the theory of BLACK FLAG in general.
Sometimes some people are not so lucky to have a place to live the time and thats the bottom line. As far as now, things are GREAT and YES I am getting old !! Thanks for bringing it up!

There is a story as the “Dopesick” recording sessions would have been totally chaotic. You put up a mess everywhere!And something about a broken bottle and inscriptions with blood … Can you tell us about it? Just another day in a substance and booze chaotic fueled past life of EHG I guess.
I do not really remember all of the details that we have been recording the authentic sound of breaking glass for an intro or something. The blood dripped on the floor of the studio and someone took the liberty to use it. I believe ‘Helter Skelter’ was scrawled there maybe? We continued to finish up what we were doing. I had no idea this was a problem. Fuck the whole lot of ’em, I hope they were fucking pissed off.
What are your influences, what do you usually like to listen to? I have an affinity for old 70 – 80’s punk like THE TESTORS, DISORDER, VIOLENT APATHY, THE FIX, UK SUBS, PIL, GERMS, DEAD BOYS, DRI, PAGANS, FUCK-UPS, NEGATIVE TREND, EATER, DISCHARGE, AGNOSTIC FRONT, CRIME, NY DOLLS, THE SAINTS, THE BLESSED, SUICIDE, HOLLYWOOD BRATS … more other shit like old DEICIDE, SPK, DEATH, VOIVOD, ROKY ERICKSON, DISRUPT, SLEEP etc. I mean fuck I could go on for years. I’m a fan of the underground, and the list is endless.

You’ve participated in the soundtrack of the HARMONY KORINE’s movie GUMMO. How did this collaboration happen?What do you think about the movie? What kind of movies do you like?
That was done through mutual contacts and common friends. Harmony Korine is a fan of black / Doom Metal, so is was inevitable. I had heard that I was interested in our stuff and I’ve been a fan of his work for some time. The movie GUMMO is a strange hallucinatory vision of Midwestern America, or is it a reality show? Some of it is so candid & odd, it is a suburban Ohio nightmare. I like alot of different types of cinema; House, The Cars That Ate Paris, John Russo’s Midnight, Death Race 2000, Good Fellas, martial arts movies, zombie movies, Mafia and crime flicks, documentaries of all sorts.
How is the scene in New Orleans? You appeared in the full boom of the NOLA, what’s left? The NOLA has been here for a long time and has been growing and growing ever since. I guess the early 90’s when we started getting recognized on an international level. The scene as of 2008 Post-Katrina, is in full bloom of the day being destroyed in ’05. HAARP, FLESH PARADE, ENDALL, HAWG JAW, SPICKLE, HANGING, HELLKONTROLL, WE NEED TO TALK, CATHILOCON, FACE FIRST etc..etc..Not to mention DOWN, CROWBAR, and all the I ‘m in; ARSON ANTHEM, OUTLAW ORDER, EYEHATEGOD.

What bands kicked your ass these times, at a show or with an album?
In the early days like 1979, my brother used to sneak me into clubs to see local bands like THE NORMALS, who were our version of The Buzzcocks I guess. Later on SHELL SHOCK, THE SLUTS, RAT FINKS started playing a more California & NYC. Years later in the mid 80s there was EXHORDER, a speed / thrash act that was an amalgamation of groups like Slayer / Exodus. There was definitely a lot in between these great fucking bands, live & on vinyl.

You seem to have a little trouble with justice. You went to jail a few years ago. Could you explain what happened? This stuff is documented on the I-net, usually exaggerated beyond belief. I’m not interested in getting into it here. I’ve been in jail numerous times, it’s all part of the game of drugs & crime, but it’s not about anything. When you grow up in poverty & violence as a child It is possible though to transcend this problem life. I’m complying with the current system, and I’m back in my past.
This is a new band, OUTLAW ORDER, some years ago in parallel to EYEHATEGOD. Your first ep is called “Legalize Crime”. So, you’re real outlaws huh ? Do you have a lot? Will you release another Ep, album or whatever?
00% is a band we started because Jimmy Bower was out on tour with Down & we just got tired of waiting. We’ve been through a couple different incarnations but remain a four piece. We’ve just recorded a song called “Dragging Down The Enforcer”. We will hopefully be on tour soon.

GG ALLIN had this song “Legalize Murder” too. Do you like what he did, have a musician or the man? Do you recognize yourself in it?No, I’m not recognizing myself in his life, I’m a good asshole, I’m glad he’s dead, but I do not know what he’s like. concept, going on pure instinct or what ever, but I do not approve of the rape of women bullshit EVER. That aspect is fucked up, but his music is honest, raw, and from the streets.

You seem to be close to ANAL CUNT apparently, you played with them when Seth Putnam went out of his coma. How was it? Is Seth fine now? Still not dead? I’ve been knowing Seth since probably 1990 or so. We’ve toured the USA with AC and played Seth’s first show back from his coma up in Boston. He sat in a chair for the whole set and the band was more intense than Ive seen before. His vocals were killer. And yes, he’s still not dead. He actually just got married again and supposedly had the reformed NEGATIVE APPROACH play at the wedding after party.

You started at the same time, same crazy fucked up kids generation. How was the scene at these times, to the end of the 80s to the early 90s? Do you have funny or weird stories to tell us? I’ve got 1000’s of strange / funny stories that could fill volumes. I will have a book with a history of these times, a time-line of EHG of sorts. You can see some of these stories on the myspace.com/eyehategod blog.

Your last release, a compilation with some unedited tracks, is called “Preaching the end time message”. Do you think doomsday is coming?Sure, of course. Its obvious that humans are destroying this Earth bit by bit, its just a matter of time.Doomsday will be slow and relentless unless we can stop the destruction of the environment as soon as possible. But if the right weapons get in the wrong hands it could be possible to happen through terrorism. I do not think some bearded prophet in the sky is gonna throw a lightening bolt down and obliterate us any time soon … that’s a made-up concept. This planet would be better off if the stinking bacteria called humanity was wiped the fuck out. The air, trees, water and animals that live by the elimination of mankind.

How did you live the Katrina Hurricane which had devastated New Orleans? Have you been touched personally by this event? Absolutely. Every single person who lived here at the time has their own personal tragic story. I lost 25 years of music, books, art etc … My life changed dramatically and drastically. Those days will be forever etched in my memory.

What is your view of politics in the USA these times?Corruption is the norm. There’s so much more about it than it’s droppingly amazing. The Republicans are totally fucked, the Democrats are not to be trusted, its a goddamn mess. The entire governmental structure in America to be knocked down and rebuilt. Its antiquated. Its something that was formed when we had a different way of thinking and we could not do it. This political system is out of date and needs to be up to speed with modern times. I promote a Ninth Position Ideology, which destructs the standing platforms and spreads the word of Positive Nihilism.

There is the presidential election this year in the USA, will you vote or do not give a fuck? I can not vote being a convicted felon and all that, but I really do not know who I would vote for anyway if I could. Obama, McCain is basically a Bush-lite copy and I guess I do not fucking care. Id like to see the world, but
the majority of folks change their massive ways of stupidity and evil this country, my friend, is FUCKED.

What do you know about France? What are your views about France from the USA? Do you know some French bands?I know its a beautiful place and the people have always been cool to me. I’ve never been to Paris but I’ve been to somebody I’ve been to that blame some of your people for hating America. The image of this country is misplaced and embarrassing to say the least. I know some French bands like TRUST, BORDER, HEIMAT-LOS, URBAN METAL etc … but not many of the newer ones. I would love to hear some though, if anyone read this