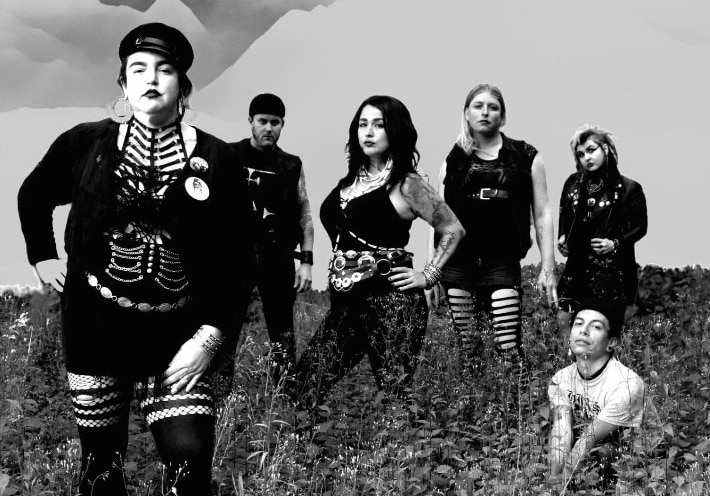 Though there were a number of heavy hitters, Seattle suffered a bit of a lull in terms of cranking out punk bands over the last decade or so. Luckily, that day came to an end a few years ago when booking group Persons Unkown began hosting shows at The Highline, Georgetown Liquor Company, and Black Lodge. At the heart of these operations were Craig and Taryn, long-time activist punks that had been active all over the Western US for what feels like decades. After their last crust band, Kohosh, dissolved several years ago, Craig went on to start anarcho-punk band Arcane which was received with awe as a beckoning back to Crass basics as they toured with Omega Tribe. Inspired to do her own thing, Taryn set about gathering her friends who weren’t currently playing music and invited them to join the power house now known as Medusa Stare.

After several early lineup changes and a refinement of their presentation, the outfit has hit their stride, beckoning radical occultists out of their hermitage to destroy the ecocidal death machine of capitalism. As opposed to forfeiting their multitude of talents and resorting to a one-trick-pony of throwback anarcho-punk, they’ve stretched their abilities to include several compatible styles, solidifying their eclectic fortitude in relaying their messages.

One can immediately hear the more obvious musical influences in the screeching guitars, yelled anthem choruses and tribal drumming but while delving deeper, haunting spoken-word passages recounting such gut-wrenching topics as loss and childhood poverty courtesy of poet Sasha LaPointe reveal themselves to give a depth a meaning and lived experience to the delivery. As opposed to taking up the banners of others’ oppression or grief, it is obvious that Medusa Stare has truly survived what they speak about and it comes from dark hearts that refuse to be silenced. Combining this with impeccable musicianship, artistry, and an eye for their unmatched fierce glamour, they are in themselves an informal institution of confidence for the lovelorn, demoralized masses whom negate the narrative that their lives by led in submissive adherence.

Their debut self-titled cassette is in low inventory but they promise more releases and touring soon enough. Keep an eye out for more from these badass dark magick warriors.