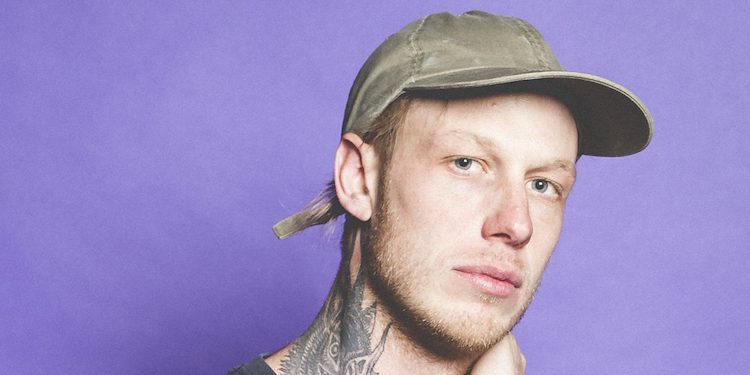 The process of transformation is nothing new for Reuben Sawyer. Whether it’s a shift in musical direction or a fresh approach to visual art, the renaissance man behind Rainbath Visual and multiple music projects (Hollow Sunshine, Dry Insides, and Rose, to name a few) always seems to have new tricks up his sleeve.

In the latest stage of his musical evolution, Sawyer has focused his energies on The Column, a new solo project that differs in sound from his previous work without abandoning his singular vision of humanity’s dark side. While the music itself is definitively brighter and more upbeat than the rest of his extensive catalogue, Sawyer’s lyrics remain buried in the depths of misanthropy.

The duality of The Column lies in this contrast between light, poppy music and dark subject matter. In “Reasons,” the first single from the project’s debut album, Oracle, what appears on the surface to be a simple synthpop song reveals itself as something more sinister, with Sawyer narrating the chilling reminiscence of a criminal on the run.

Using accessible, stripped-down pop as the canvas for his bleak lyrical content, Sawyer has created a minimalist masterpiece that stands out from his impressive, ever-growing catalogue. A monolith emerging from a body of work bathed in fuzz and feedback, The Column proves that change can be a good thing.

We spoke with Reuben about his influences, interests, and intentions for The Column. How long has this project been in the works?

About a year or so. Some of the songs came before The Column was fully realized.

The Column is sonically quite different from the rest of your projects. In which ways is it similar, and how does your writing process compare to the others?

I use all the same recording equipment and techniques for every project, but since this is the first solo endeavor that features my singing it takes on an entirely new face. Anyone might hear similarities in my production and guitar work if they are familiar with any of my other projects. When you develop a signature of playing, it’s kind of hard to avoid previous influence from other songs. Every time you write music, you learn something new about yourself and shape up what you already know. I’m looking for longevity with The Column. That’s what is important.

What inspired this project?  Not just musically, but anything from literature to art to film, etc.

Stagnation and restlessness. The desire to move forwards and mature crude ideas into concrete realities. I love the feeling you get when you start a new project. It’s like enjoying a new romance or hearing an album for the first time that really inspires you. You become obsessed and ambitious as if nothing can harm this fresh emotional energy. The key to not letting it spoil might be akin to the process of alchemical transformation. In other words, songwriting is salvation, a way to shed your own skin and extract the gunk into something palatable. External inspiration can come from anywhere. I enjoy theatrics. I always imagined The Column to resemble the starkness of a Peter Greenaway film. Would you consider Oracle a concept album?

The lyrical content on Oracle is a vision into terror. It represents humanity at its most sadistic and unforgiving: obsession, murder, and alienation. The empathy needed to evolve our species is dwindling. Love is a never-ending game of ideals and uncontrollable sickness. The song “Reasons,” which is probably the most accessible of the bunch, embodies these themes in the vanity of bloodshed. I’ve always been captivated by pop songs that have overtly depressing or contrary lyrical themes that offset the instrumentation and create a dualistic faculty.

Did you have a certain sound in mind when you started or did it evolve on its own?

The goal of this project has always been to write songs that are pop-oriented in flavor to some degree, with a clear and upfront vocal approach that drives it home. I feel that a lot of post-punk and surrounding genres rely on “vibe.” This could be anything from buried vocals, over-textured guitar, and other various murky aesthetics. Genre has to be defined by rudimentary structures in order to create a movement or vision that people can relate to. Not that I need to be completely against these forms, but I’m more concerned with writing songs that I enjoy. Do you intend to perform live or will this be a recording-only project?

I guess I will have to wait and see what happens. It’s hard to visualize the performance aspect of The Column. It’s funny, for as much as I am obsessed with theatrics I usually hate to see them embodied in a live performance. Maybe it’s hard to do it well. I resonate with bands more that get up there and just play the songs, the raw deal. It’s another dualistic principle that a record can provide limitless mystique but the live setting can strip it all away to a demonstration of people clanking away on basic instruments. It’s cool to think, “Oh, wow! I can do this, too!”

How does your visual art play into the themes of Oracle and The Column as a whole?

I try to keep my personal art and my client work separate, which gives me the opportunity to literally do whatever I want on my own album covers.

What can we expect from The Column in the future?