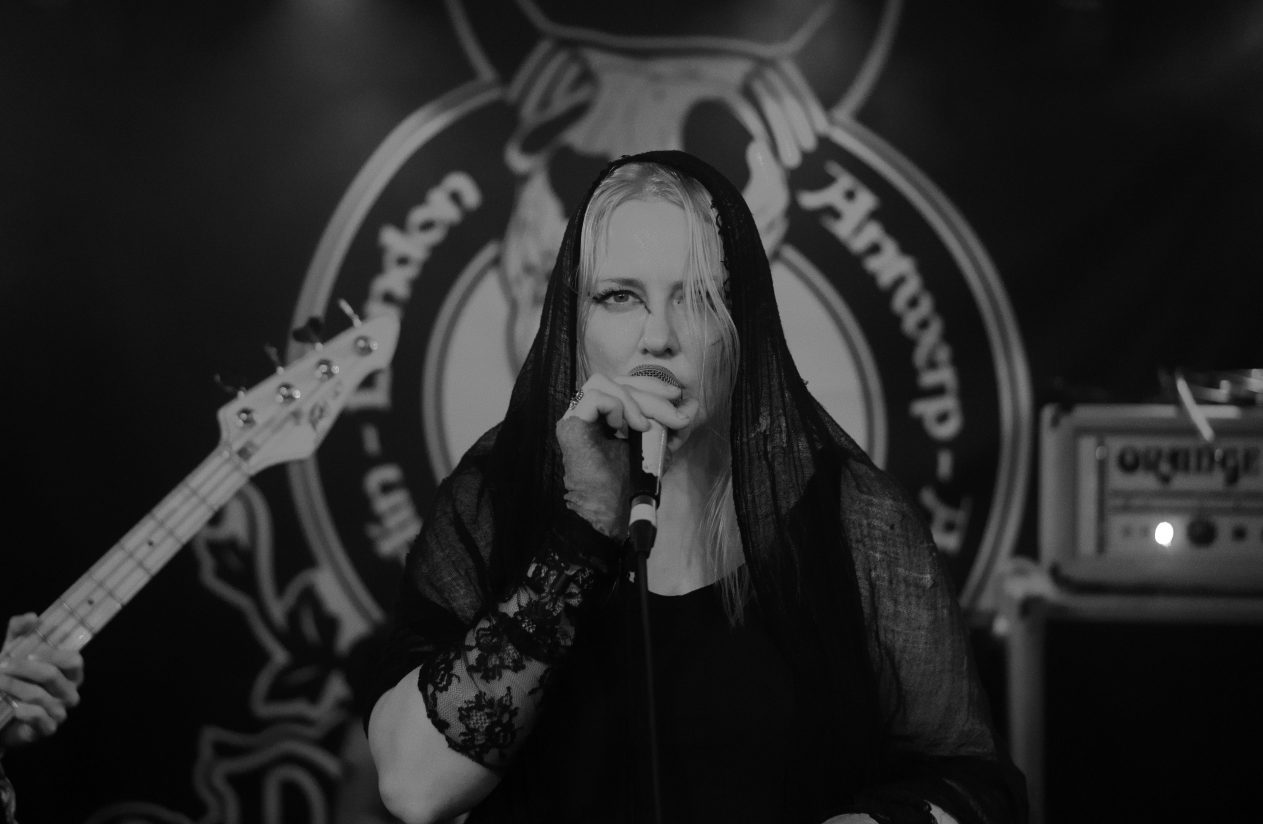 Standing at a crossroads of light and dark, CHRCH create epic, lengthy songs, with a massive low end, and a supernatural vocal presence, in a perfect blend of height and depth. CHRCH has been hard at work crafting their particular sound since 2013. There is no image or gimmick to uphold, only the humble glorification of their fundamental musical elements.

This purity and honesty comes across in a striking manner on the band’s debut Unanswered Hymns (Battleground Records, 2015), a sprawling roller coaster of an album. Long-form songs build and dismantle as the band reaches sonic heights and beautiful plateaus. Severe, sometimes unrelenting, guttural vocals contrast with melodic singing, just as massive guitar fuzz gives way to cleaner parts. Recorded, mixed, and mastered by Patrick Hills at Earthtone Studios in Rocklin, California, it exudes a warm, organic tone that draws the listener in with a sound influenced by traditional doom, psych rock, drone, and ambience.

The band’s second full length, Light Will Consume Us All, carries with it the same quality of songwriting that caught the attention of fans worldwide on their debut. Building upon this unyielding foundation, Light Will Consume Us All also continues CHRCH’s narrative, traversing life’s epic journey of loss, reclamation and, ultimately, finding hope within the darkness. The music of CHRCH calls the listener to inhabit it, allowing enough room for its transmutation into anything one desires of it. I talked with the band during Deserfest London. Their performance literally took my breath away.

I’m here at Desertfest with CHRCH. What does someone expect when they attend one of your shows?

Eva: It’s going to be loud.

Karl: I was talking to somebody from the UK, who I think had never seen us before, and he said there was an energy specific to the band that wasn’t necessarily typical for heavy metal music. But in a positive way, it seemed like.

So let’s talk about Light Will Consume Us. How would you describe your latest work?

Eva: Well, I think we pushed ourselves.

Chris: It’s kind of a progression of what we’ve done before but asking how far we can take it without limiting ourselves in any way. How far can we take what we’ve already done and break into new territory?

Eva: We tried to really not just write the same record again. We tried to really push our boundaries and our progress. We really just tried to push the music forward to create something different than our last record that’s still cohesive with it.

Chris: I feel like our personal and emotional states kind of play a large factor in it, so it’s always going to progress in different ways between records.

Why did you start playing doom and not another genre?

Eva: Well, when we first started playing we didn’t really set out to make a doom band. We just felt like playing really heavy and slow music. It’s just kind of what we felt like doing at that time.

Maybe that’s because of your musical background? Or not?

Chris: That sort of plays a factor into it I guess

Eva: I guess I was listening to a lot of really heavy music at that time.

Chris: We definitely have a background in doom and metal in general, but that’s not really, like, why we started doing it. We just wanted to play. We started playing and it came out like that, basically.

Eva: Yeah, we were just kind of jamming and that’s kind of what happened. You signed with Neurot Recordings for your last work. How did you end up with them?

Chris: Sort of circumstantially, really. They all kind of exist in the same area that we do, geographically. So we just kind of hooked up a little bit like that.

Eva: We have the same circle. Our friend groups overlap.

Karl: In particular, Clint was a big part of that too. Right?

Chris: Yeah, we have friends that were able to show us to them. I’ve booked Scott Kelly a couple of times and played festivals together. We’ve been in the same circle for a while and I think they just kind of noticed us.

What do you think about the metal doom scene these days?

And how is it in California?

Chris: It’s cool that doom metal is in a state where it’s never been before. It can push boundaries in all directions, there aren’t really any limits anymore. Not that there ever really were, but the same thing has been done for so long that I feel like people are forming bands to be able to break the mold. And that’s pretty sick, and is why I think it’s gotten bigger and a wider audience has been brought in. That’s what has brought everyone here, really. What’s next for CHRCH?

Eva: Well, we’re going to tour around this record. We’re going to do another tour in June in the States. Maybe tour in the fall, winter. And keep writing.

Are you writing something new now?

Chris: It’s always going. Like I was saying earlier, it’s always like our mental and emotional state brings it out. So we’re always creating, whether it’s in a physical sense or a mental sense.

The first time I listened to your record it was kind of like this atmosphere of sorrow and pain. Is that the feeling you’re trying to communicate?

Eva: Yeah, that’s definitely involved, you know. I don’t think it’s that only. Or I hope that’s not only what comes across, but yeah, that’s there.

And that’s the reason for the title of the record?

Karl: I think it’s always like a balance. I don’t think people always listen to things that are only punishing. Some people do I guess, but I don’t think that’s why we like to create music together necessarily.

Chris: Yeah we definitely want to put across sorrow, but there’s also an aspect of redemption in the end, always. Because it’s not all bad all the time.

Adam: To me, in this record, where we were all at in our lives and stuff too and everything, I think it’s really reflective of all the phases that we were each in individually and kind of all together, cause there was a lot going on between us because of the phases of our lives that we were in. And I think that we’re all kind of similarly at the tail end of that. And to me the record ends on a pretty hopeful note, because I don’t think anything was at that time for any of us. There was a lot of change going on. And I think that comes through a lot. So do you think the society we’re living in today maybe inspired this record?

Eva: I think it’s impossible not to.

Chris: We’re always influenced by society, whether we want it or not it. Its influences the way we think and act.