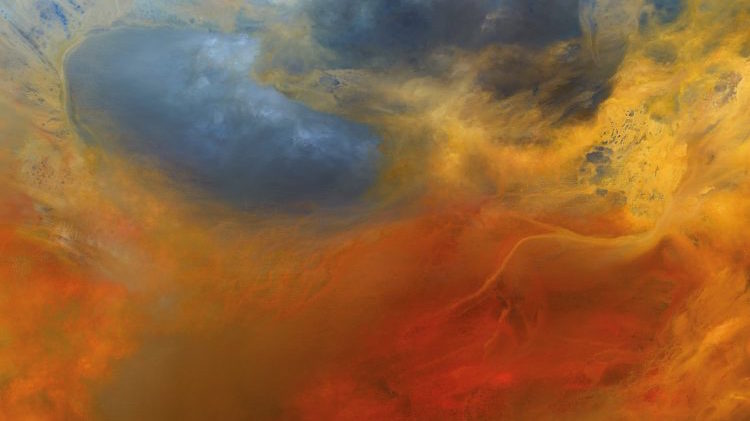 It’s been a four-year wait for this Sunn O))) release, perfectly in keeping of course with their deliberate and considered approach. The band’s co-founders Stephen O’Malley and Greg Anderson had a clear signal of intent with this recording, integral to which was the involvement of Steve Albini in his Electrical Audio studio.

The result is four remarkable compositions that embrace elements of their work together across the past 20 years whilst also conjuring up new sonic shift patterns that suggest Sunn’s journey towards ethereal emptiness is far from complete.

Before the esteemed Albini leant his inspired intervention, O’Malley and Anderson united once more at Downturn Rehearsal in LA, where the pair first started to forge their Sunn symmetry.

Sunn’s stage show, in which they appear hooded in flowing monastic robes, undoubtedly adds to the band’s aura and reputation, making them an utterly compelling live presence. But in their purest recording form, free of distractions, their sound remains a unique listen and on new album Life Metal they immediately pull you under their spell on the opening ‘Between Sleipnir’s Breaths’.

A horse’s cry, sampled from Bathory’s deathly ‘Oden’s Ride Over Nordland’, heralds the start before a distorted drone starts to sway back and forth. A striking shard of lighter sound pierces through after a couple of minutes, the vibrations rumbling down as Sunn start to lay their atmospheric foundations. What does catch you slightly off guard are the almost childlike female vocals of classically trained Icelandic cellist Hildur Guðnadóttir that hauntingly sit atop the deep chug cuts. The lyrics from ancient Aztec poets speak of finality and endings – ‘Like a painting we will be erased, we will come to an end’.

Sunn have worked with many artists down the years including Hildur, while she has herself enjoyed unions with assorted musical entities such as Throbbing Gristle and Múm. Her presence certainly adds something to the Sunn demographic.

Her support is not called for on the following two tracks, of which ‘Troubled Air’ (titled after an essay by author Aliza Shvarts, who also penned the liner notes for Sunn’s Kannon, 2015) is a particularly powerful slab of aural prose. The drone delivery is punctuated by higher end wails while the trajectory is marginal throughout, occasional movements adding depth but the overall constant being an extended pull of drone enlightened with fleeting moments of richer opulence, eventually swallowed by a vacuum of pipe organ orchestration from new composer Anthony Pateras.

O’Malley and Anderson are masters in seamless subtlety so while to the uncommitted observer little if anything is occurring to the more intuitive listener it feels as though the whole cosmos is within reach of end of your fingertips. It’s powerful, poignant and as it explores and challenges perceptions around sound and time and sound and energy.

‘Aurora’ begins with the familiar pendulum swings, as though some mythical beast is stirring from a particularly lengthy period of hibernation. As with the other tracks, the use of analogue recording techniques adds further gravitas to the coruscating compositions.

As if still not convinced that gratification has been achieved, Sunn seal the deal with one final immense opus, the 25-minute concerto closer ‘Novæ’. Hildur’s presence is significant once more here through her use of the peculiar string instrument, the haldorophone. Things move at a marginally more gathered pace, at least when set aside Sunn’s own customary funereal flavour.

Released by Southern Lord Records, Metal Life was recorded at Dave Grohl’s 606 studios in Northridge, California and then mastered and lacquers cut from tape in October by Sunn ally Matt Colton at Alchemy in London. The sleeve is a technicolour explosion that acts as a suitable visual to the aural, courtesy of artist Samantha Keely Smith.

During O’Malley and Anderson’s studio time with Albini work was also undertaken on some more meditative moments and these are due to appear later in the year under the title of Pyroclasts. The drone duo are as active on the road as in the studio with a host of dates across Europe later in the year.