Submerged in the crowd of sweaty metalheads commenting on each other’s obscure t-shirts; I sipped my beer and reflected on the performances I had just witnessed. One of those being Incantation and as always delivered a devastating set from their blasphemous catalog. Such hits as “Christening the Afterbirth,” “The Ibex Moon,” and “Devoured Death” were played with immaculate precision. At that point, I never expected to have a lengthy interview with their vocalist/guitarist, John McEntee, especially while I was shitfaced. I’m sure once the “interview” concluded, McEntee was thinking, “that guy was fucked up.” I was the definition of unprepared, but nevertheless to my surprise the whole shitstorm turned out better than what I expected.

When I woke up the next morning to the rumbling snores of my friends my brain was shattered into an endless headache and fragmented memories faded in and out like static-filled radio transmissions. I roll out of bed searching for my camera hoping that my dumbass didn’t lose it at the venue as this was the only key to piecing together the previous night. Luckily, it was sitting on the hotel lounge chair and to my surprise without damage. I turn it on to check the memory and see the last video clocked in at 20 mins… Dare I press play?

There on the screen, I was swaying in a windless night with a dumb, blank stare and to my left was John McEntee introducing himself to the camera. I suppose I’ll never figure out how exactly the interview came to fruition and I suppose it doesn’t matter as long as I didn’t piss the guy off. Please keep in mind, this is not how I usually roll. I try to at least be somewhat professional. Next time I’ll stay away from beer that’s 12% abv! Goddamn IPAs! What inspires INCANTATION as a band to continue making albums?

At this point, it’s almost more personal than anything. It gets to the point where writing music is more a way of expressing myself, and I think that it’s the same way for the other guys. It comes on as an extra sense or something like that. It’s pretty natural. I’d say the things that get me motivated is watching bands kick ass and it gives you that extra little push to make you wanna kick ass yourself. You don’t get that same feeling if you watch a band and they suck.

What are some bands that you’ve seen recently that have kicked ass like you were saying?

Not really a lot of newer bands. Uhhh… Mayhem. Immolation – they kick ass, they always kick ass. Uhh, Demilich, saw them recently. We did a tour with Exhumed and Phobia and both bands are really great live. Exhumed was kind of funny with their little extra stage things, kind of cheesy, almost kind of gimmicky.

How much is that gimmicky stage presence important to you guys when you perform?

To us it’s so natural, when we play we just let the music run through our bodies. We don’t really have to think about it too much. And since I was the one that started the band from the beginning, I kind of have a vision of how the songs should be expressed. We don’t really go much for gimmicky stuff, we go for the more old-fashioned way like old Metallica or Slayer. You just go out there and kick ass and get the feeling from the music and let it take control. It nice to have backdrop and lights and stuff but it’s not really that important to us. Is there anything outside of music that inspires you to continue performing and writing songs?

You know, real world life is kind of a pain in the ass. And I look forward to getting on the road and just playing and enjoying myself and doing what I love doing. Being a part of the everyday grind of normal life sometimes… It’s not horrible, but I get that itch to want to play metal. And once you play music, and especially me and the other guys in the band too, music is a way of expressing themselves. It’s like, once you don’t do it for a while it just kind of pulls you in.

What do you do outside of being Incantation?

Right now, I mostly concentrate on music stuff. I mean, when I’m not touring I do some Uber driving haha. I’ve had some regular jobs in the past, too, but it was just too restrictive. It was a pain in the ass and it sucks having to ask your boss all the time to take off.

How does it feel being a part of Incantation?

It’s a dynamic I have gotten used to, where it’s like we play shows and people are really into it. And we really appreciate it. But once we get into the real world I’m just another schlub like everybody else. Most people don’t care. They think it’s great if they hear I travel the world. But besides in the metal community, you’re worthless…haha It’s just different bands. People are different. Some bands prefer to play and chill out do their own thing. For myself, I grew up as a metal fan. Die-hard and always went crazy for bands. I love metal, I still do, I like hanging out with people, and honestly, I kind of get bummed out doing longer tours because I can’t hang out as long trying to talk over bands playing because it ruins my voice.

In my opinion, You guys are one of the best death metal bands out there with releases comparable to Morbid Angel or Obituary, or what the fuck ever…

Yeah, Back in the day I used to watch Morbid Angel in the late 80s/early 90s and their fire was definitely inspirational because every time they played it was 100 percent, and they were out for blood when they played. I love watching bands that feel like they’re really going for it so obviously, I do the same thing. I want to hear the same thing from a band, not just dialing it in. Sometimes I watch bands and it seems like their doing it for a paycheck…

This is a bad question, but what’s the worst shit you’ve ever heard?

I don’t care, haha! I can’t remember, but we were on tour and I think it was north of Salt Lake City. It was an all girl band, or like the girl was a singer, and they were doing like a Suicidal Tendencies thing, but they were talking about going to McDonalds and getting a cheeseburger or something haha…

I would consider you guys “iconic” how do feel about that? Do you feel like a normal person?

Well, yeah, I feel like a normal person definitely, but it’s a great honor. When we started the band we never had the expectation of being “legendary.” It was never on our radar. So when we hear that, we don’t go home and talk about how cool we are, but it’s kind of like getting an award and it’s nice to get the recognition. But when it comes down to it, it doesn’t really affect us. When we hear a band’s influenced by us, it’s a little weird, but it’s like an honor.

How do you feel about Profanatica?

Oh, I love Profanatica; you know, Ledney is the guy I started Incantation with originally. He was the first drummer – it was me and him that started the band. What gave you guys that spark to start Incantation?

I grew up in the 80s with bands like Possessed and Celtic Frost, and then there became stuff like Death and Necrophagia, and we like what a lot of those bands were doing and as metalheads we wanted to take it to the next level in our own way and the influence of those bands and mix it into our own style. I’ve seen a lot of great bands like Kreator on Pleasure to Kill, Slayer on Reign in Blood, or Possessed on Seven Churches and those are things that inspired me – you see that and you’re like “FUCK!” and you wanna go even sicker.

You don’t want to recreate that sound but make more your own version?

You see, we never wanted to be other bands, we just do what we do and whatever happens happens. It’s an almost punk rock attitude, kind of like, just fuck off, haha.

Thanks, man! I really appreciate your time and if you want I’ll buy you a goddamn beer…

Well, I get beer for free, so it would stupid if you bought me a beer.

Well, then why don’t you buy us a beer?

In this article:Incantation, john mcentee 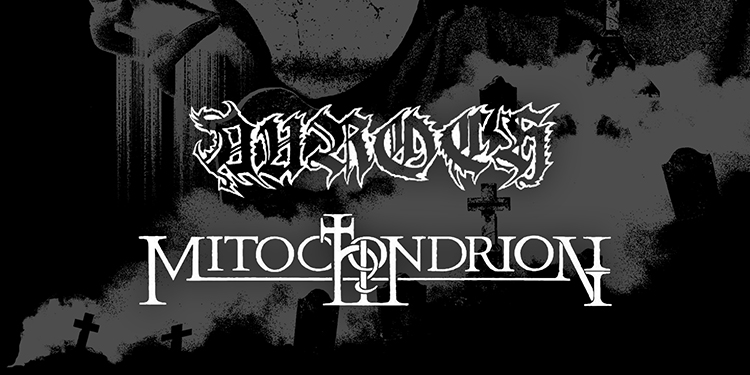 One of the best things about relocating CVLT Nation to Vancouver, BC from L.A. was becoming embedded in the thriving PNW underground. We’ve been...

This is fucking awesome….live footage of Incantation in 1991 playing at G-Willikers in Pennsauken, NJ, on May 31, 1991. Check out this amazing full set of...