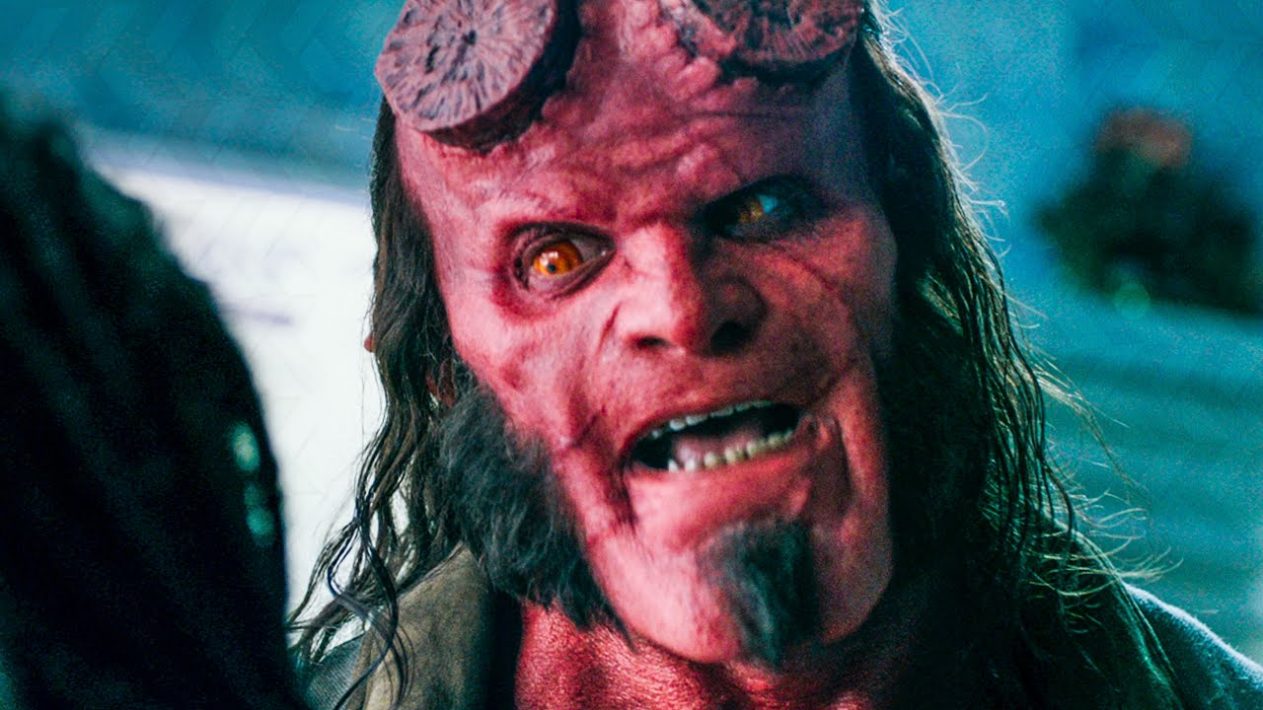 Hellboy: A Lewd, Crude, Rude, Punch in the Face

This ain’t your daddy’s Hellboy. This ain’t Guillermo del Toro’s Hellboy. Hell, this doesn’t even look much like Mike Mignola’s Hellboy. This one belongs to director Neil Marshall, and your ability to suspend your feelings for del Toro and Mignola will go a long way in determining whether or not you like this update.

We jump right into the action. Hellboy is established in this world, the BPRD is up and running, and the people know about the existence of both. We get a fight right out the gates with Hellboy and a former BPRD agent turned vampire and from there the momentum never stops. The movie races forward, breathlessly throwing in flashbacks and background plot and ripping onward, never pausing to consider or debate or reflect on what’s happening as the story unravels. There’s an evil witch queen who is stopped by King Arthur and Excalibur and chopped into pieces, but if she’s reassembled, she can return to full power and bring the world to its knees. Guess who helps her do it? A former nemesis of Hellboy, a giant pig-man intent on revenge. Well, of course he succeeds and of course Hellboy has to face the queen and all of her magicks. Along the way, we get introduced to a couple of sidekicks not used in the other two movies (there’s no Abe Sapien and no Liz in this one) and while the chemistry feels a bit forced, it doesn’t really matter, because the movie doesn’t give you time to dwell on it. They fight monster after monster until the end, when good triumphs and Hellboy lives to see another day.

If del Toro’s version was a scalpel that sliced into the viewer using esoteric wit and gothic atmosphere, Marshall’s version is a meat cleaver that caves your face in. This movie is gory. And I mean gory. There’s blood everywhere. It’s merciless in its violence. Gleeful and giddy and drunken with violence. If del Toro’s films were the equivalent of an Iron Maiden masterpiece, Marshall’s film is a Venom cover version of the same song, clattering, brutal, unforgiving, and unlovable. But that’s where it succeeds, I think. It does its own thing, beholden to no one, charming because it is so damned ugly. This movie has more in kin with something like Resident Evil or Underworld. Only those movies are sort of polite; this one will puke in your lap and laugh in your face about it.

The performances are good. Milla Jovovich as the evil queen is at turns nasty and tasty, David Harbour as Hellboy is a drunken, slurring mess (and I mean that in the best way possible), and Ian McShane does his foul-mouthed thing to perfection. The action is almost overwhelming at times, bordering on video game intensity, the sets are terrific, the blood flows and spouts and gurgles, and the monsters…Oh man, the monsters. The eruption of giant creatures at the end is a marvel to behold.

Hellboy has garnered a lot of bad reviews. I get that. This isn’t finesse, it’s not fine art, it’s not surreal in that mentally heady way that del Toro’s movies were. It’s a blunt, cussing, punch to the face. This is the kind of movie where you can turn off your mind, turn up the horror, and watch the blood flow. If that doesn’t sound like your thing, then stay at home. But if you want to have a bloody good time, there’s not a better film this summer to slake your thirst.

Oh! And we get Lobster Johnson! I mean, come on. It’s worth it for the Lobster cameo alone.