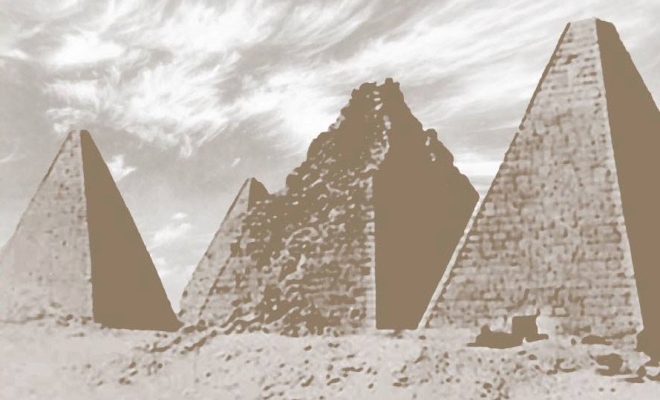 I’m keyed up to present you the exclusive streaming of the brand new HaiKai No Ku album, “Ultra High Dimensionality”, here on CVLT Nation. The record springs from the spoors of last year’s remarkable “Sick On My Journey” and “No Blue Sky” before that. Production-wise, and unlike the past efforts, it has a balmy feel to it, keeping the collective sound at a safe distance from their compatriots in Acid Mothers Temple, who employ an equally cuspate and cutthroat tone. That comes in valuable, also averring the shrill cry Vest’s guitar articulates is an erotic one. Inasmuch as it’s sinuous and it’s magnetic: it has no concern for time.

Captivation of the desolate desert. Captivation of the sand dune. Captivation of release. Being fascinated with the ruins in the sonic realm has always led to some insight for the musicians. Whether it was for Henry Cow composing ‘Ruins’; Kyuss, ‘Freedom Run’; or Floyd, “Live At Pompeii”. This fascination does not have to be hierarchical or to post-date the songwriting. Who knows, HaiKai No Ku might have named the tracks after they were composed, like Penderecki dedicated his piece, ‘Threnody For The Victims Of Hiroshima’, after it was written. Even if, the fascination is indeed there – nonlinear witchery. ‘Void In Aimless Flight’ it is named, the fourth song off this forty-minute reverie. Given the inkling, a black hole of doom awaits the listener in HaiKai No Ku’s absurdist re-telling of the Sabbath story. Jerome Smith, Sam Booth and Mike Vest have tastefully secured the path of bluesy doom metal, the sound that ceased to exist as the 80’s happened and as the Priest happened, but continued to forge ahead in the 90’s, especially with bands such as EHG and Sleep. It is of interest to mention that Judas Priest, apart from adjusting the consensus for the tempo, also made their influential way up to the 80’s doom scene, a scene that was supposed to bring back the Sabbath sound. Almost all the bands of that time, from Saint Vitus and Witchfinder General to Candlemass, are hugely influenced by Priest, not to mention Iommi’s efforts to build up a similar sound around the same time with the likes of Dio. In any event, the 00’s again saw the doom on downswing, with the call for Sabbath being there, but more for the stoner rock than for the doom. The doom metal practiced in the 00’s, as well as the 2010’s, is at best the continuation of the Saint Vitus sound, with bands like Pilgrim, and in other cases it’s not doom metal to begin with, e.g. Cult Of Luna. And while other projects of Mike Vest also embrace both blues and doom, it is only with HaiKai No Ku that all systems go Sabbath.