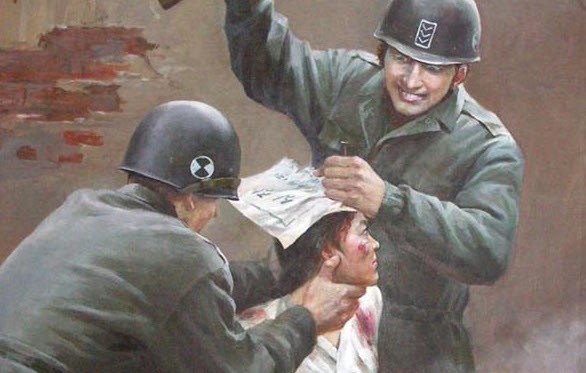 North Korea is the ultimate “safe space” where only one opinion matters and no dissent is allowed. Safe spaces stop the dialectic in its tracks—just like North Korea does not permit any serious critique of its Supreme Leader the “Shining Sun” Kim Jong-un. We may not dig what happens in our own western countries, but we are free to question, to protest and to instigate change.

We have the opportunity “[t]o see ourselves as others see us,” as the poet Robert Burns once wrote, which—one hopes—“would from many a blunder free us.”

The North Koreans and South Koreans suffered terrible atrocities at the hands of the American GIs during the Korean War. At one point during the conflagration the US had a “take no civilians policy” which led to hundreds, if not thousands, of deaths.

Atrocities were committed by all sides—but while those of North Korea and South Korea have been documented—those committed by the American Army only came to light after an investigation by the Associated Press in 1999. Here’s one example of the US Army handiwork:

Just weeks after the conflict had begun, up to two million refugees were streaming across the battlefield; they clogged the roads and the UN lines.

Under pressure and fearing North Korean infiltration, the US leadership panicked. Soon command saw all civilians as the enemy regardless. On 26 July the US 8th Army, the highest level of command in Korea, issued orders to stop all Korean civilians. ‘No, repeat, no refugees will be permitted to cross battle lines at any time. Movement of all Koreans in group will cease immediately.’ On the very same day the first major disaster involving civilians struck.

The stone bridge near the village of No Gun Ri spans a small stream. It is similar to a great many others that cross the landscape of South Korea, except that the walls of this bridge were, until very recently, pockmarked by hundreds of bullet holes. On the very day that the US 8th Army delivered its stop refugee order in July 1950, up to 400 South Korean civilians gathered by the bridge were killed by US forces from the 7th Cavalry Regiment. Some were shot above the bridge, on the railroad tracks. Others were strafed by US planes. More were killed under the arches in an ordeal that local survivors say lasted for three days.

‘The floor under the bridge was a mixture of gravel and sand. People clawed with their bare hands to make holes to hide in,’ recalls survivor Yang Hae Chan. ‘Other people piled up the dead like a barricade, and hid behind the bodies as a shield against the bullets.’

Corroborating the Korean survivors’ testimony are the accounts of 35 veterans of the 7th Cavalry Regiment who recall events at No Gun Ri. Perspectives differ, but the detailed memories of veterans recalling events burnt into their souls by their first days in combat are as painful as they are shocking.

‘There was a lieutenant screaming like a madman, fire on everything, kill ‘em all,’ recalls 7th Cavalry veteran Joe Jackman. ‘I didn’t know if they were soldiers or what. Kids, there was kids out there, it didn’t matter what it was, eight to 80, blind, crippled or crazy, they shot ‘em all.’

Along with the My Lai atrocity 20 years later in Vietnam, the killings discovered at No Gun Ri mark one of the largest single massacres of civilians by American forces in the 20th century. In this article:korean war, north korea