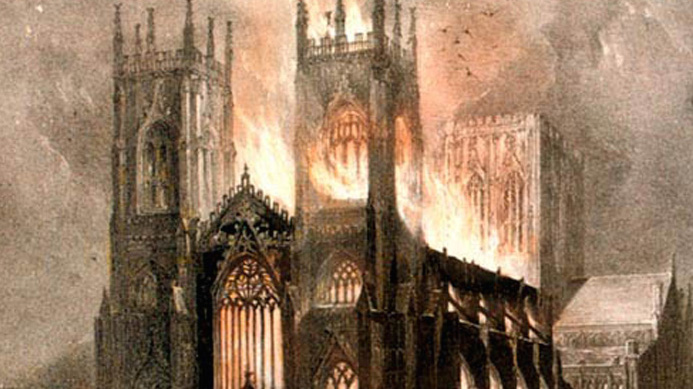 More than a century before a group of angry young Norwegians got their hands on fire and set it to wooden churches, an English man tried burning down one of Europe’s largest cathedrals. “Mad” Jonathan Martin was born to a large and by all accounts eccentric family. While two of his brothers went on to enduring fame – John Martin the apocalyptic painter and William Martin the self-appointed anti-Newtonian philosopher – Jonathan Martin went down a path of notoriety.

On February 1, 1829, Martin hid himself in St Nicholas’ Chapel of York’s huge Minster cathedral. Then, as today, York Minster is one of the largest examples of Gothic cathedral in northern Europe. It is a symbol of power for the Church of England and the seat of one of its most senior bishops. Waiting until 1.30am when he knew the building to be empty, Martin climbed into the cathedral’s choir area and built two piles from prayer books, cushions and other flammable items. Then, using a candle, he set fire to them.

Martin was a devout follower of God, a Wesleyan Methodist, and had regularly attended Evensong at the cathedral after moving to York in 1828. Wesleyan Methodists were strict and evangelical in their preaching. This led the Church of England into an uneasy tension with the sect, largely shunning the small but rapidly growing movement for being too radical.

This bad blood between churches seemed to affect Martin more than most of his fellow Methodists. In 1817, two senior Bishops were shocked by Martin’s approach. While Edward Legge, Bishop of Oxford, held a confirmation service for the Bishop of Durham, Martin interrupted the service and threatened to shoot Legge. Martin was arrested, prosecuted, and sent to West Auckland and Gateshead asylums.

After two escape attempts, Martin succeeded and made a life in Yorkshire. After months of attending York Minster, though, Martin came to believe there was a buzzing in the organ that spoke of the building’s evil. He believed this noise could only be eliminated if he were to “cleanse the Minster of wickedness”. This wickedness was the clergy’s lax faith and loose morals. He wrote warnings to the Dean. One such message read:

Believe me your time is short and, for your wickedness, God is about to come out of his place to take vengeance on you and all those that obey your blind hellish doctrine, for it comes from the black regions of the damned. Oh the millions of souls that you have deceived those many years, with what scorching venom will they fly to sting your departed souls when your fragile thread of life is cut.

The Dean allegedly never received these messages. But Martin took it as a snub. He was incensed by the Dean’s silence and, as a result, driven to action.

On the morning of February 2 choirboy Robert Swinbank slipped on ice. He hit the floor. However, staring into the sky, he noticed a far greater injury: plumes of smoke rising from the Minster. Fire fighters were immediately called but when they arrived, they knew it was already too late. The building’s choir area had been lost. The central aisle’s roof had been totally destroyed. Features including the pulpit, bishop’s throne and organ had been reduced to ash. The Minster building survived once fire fighters got the inferno under control by late afternoon but it had been totally gutted by flames.

Martin was caught on February 7, more than 100 miles away, northwards, in Hexham. He’d apparently been recognized by a pair of pincers dropped at the scene. While on trial, Martin said:

I set fire to the Minster in consequence of two remarkable dreams. I dreamt that one stood by me, with a bow and a sheaf of arrows, and he shot one through the Minster door. I said I wanted to try to shoot, and he presented me the bow. I took an arrow from the sheaf and shot, but the arrow hit the flags, and I list it. I also dreamt that a large thick cloud came down over the Minster, and extended to my lodgings; from these things I thought that I was to set fire to the Minster.

Martin’s defence argued that he suffered from monomania. This was accepted and Martin was found not guilty due to insanity. He was sent to St Luke’s Hospital for Lunatics in London where he remained, without escape, until he died on June 3, 1838. 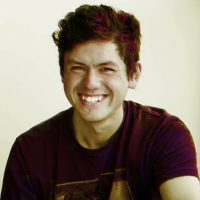 Glen Black just about survives in the bleak flatlands of the UK. He has a long history with extreme metal, anarchist politics and writing. Loves cats (and all non-human animals, but especially cats). Hates coriander (AKA cilantro). Believes "A Map of All Our Failures" was the best My Dying Bride album since "Turn Loose the Swans".