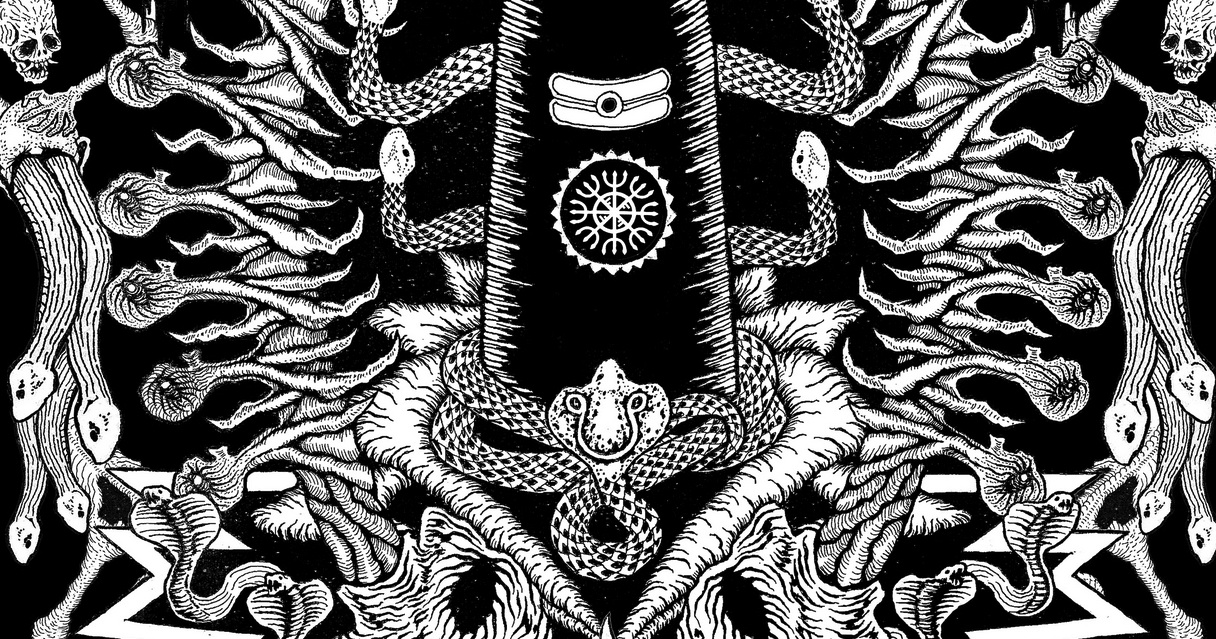 From a dark cave in the underworld comes Genocide Shrines and their full-length release, Manipura Imperial Deathevokovil (Scriptures of Reversed Puraana Dharmurder) – Yes, guys, they of the long-winding titles. Their latest release comes to us via Al Necro-approved label Vault of Dried Bones. Before you start rolling your eyes at me, going, “what the fuck, Al Necro?” – this album has got to be the darkest, most morbid spiritual descent into the bottomless hole of death metal Al Necro has gone headlong into this year. Don’t believe me, Nickelback-worshipers, try a bit of this rancid meat before feeling cocky enough to unload your crap (full-blown diarrhea) in the comments section. Genocide Shrines rules, mothers!

They’re from Colombo, Sri Lanka, and these fuckers don’t give a damn about malls or clubs. These guys play music darker than a cow’s winding entrails while a desperate sex-starved farmer plugs up its rear-end. The guitar grit is chunkier than a slab of Limburger (cheese) and the music smells like it too, like a zoo where animals shit and pee without staff members cleaning up after them, or like a shanty where pets end up as taxidermy and the people don’t have clean water to wash their feet. Don’t believe me, cvlt maniacs, these third world practitioners of the craft come up with the goods. The bass is bellowing like an eviscerated angel; the guitars are swathed with bloody entrails, and the drums sound like skulls beaten in with the use of bloody leg bones. Lastly, the vocals are the worst case of sore throat you’ll hear out of a caveman with a ruptured diaphragm. Who the fuck let these guys out of the Colombo Mental Facility for the Insane? This is perhaps ancient death metal the way Impetigo would have spawned out of the womb after having an immaculate conception while listening to death metal bands from Finland. “Immaculate Conception?” you ask, aghast at Al Necro. Try divine decomposition. Spawned from the rectum, brothers.

There’s some breakdown chugga-chugga a la ‘most morbid band ever’ Mortician, and blast sections that hurtle by like a cat-5 tornado tearing up a sewage tank. They reserve some groove for mid-tempo rockers like track four, “Ethnoheretical Padmavyuha Consecration,” but mostly, tempos change with regularity to keep the feces stinky. Filth and degradation, Manipura is the stuff of legend I love about the underground. Don’t care much for the Nile turning into blood? Genocide Shrines turns the Niagara Falls into cascading filth polluted beyond purgation. Did Moses part the Dead Sea at one point in biblical prophecy? Hear Genocide Shrines send molten excrement from a sewage tank bursting through the streets of the big city. The album begins and ends with tribal beat worship, but don’t you fuckers dare compare this demented piece of art with ‘Roots-era’ Sepultura. Cvlt ain’t having that, so GTFO nu metallers. Downpicks heavy enough to bring down a fort, cymbals crashing like a Baltimore riot, Genocide Shrines easily puts one into the Guinness Book of World Records. Darkest, heaviest band ever, meatheads!

When the band include a snippet sample of a Kamadhenu being raped, Al Necro’s stomach turns up his lunch after his stomach and bowels tie into knots. Remember privies, ivy leaguers? It’s back to the basics hearing these guys play ridiculously heavy death and doom heart-stoppers. The scent is nasty and it can be sensed everywhere within a kilometer radius.
Now listen to some of this shit!