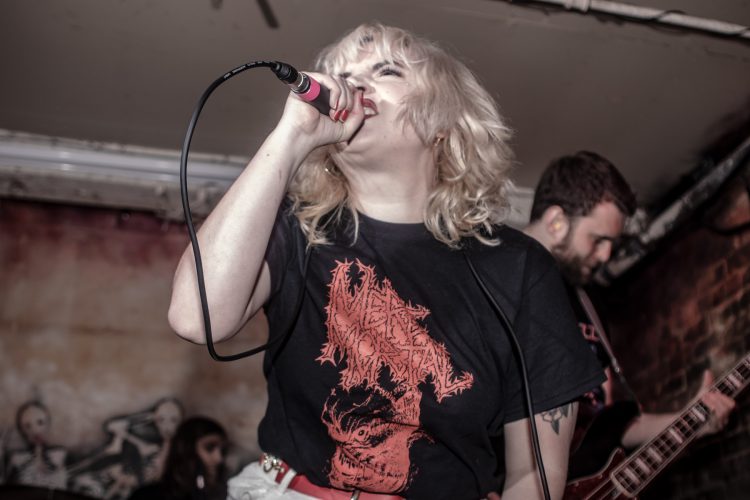 After a chaotic Friday pin-balling all over the place Saturday was an even more intense affair and so memories are a little hazy.
Over in the newly opened Hotbox stage and starting the day off on the right sludgy/hardcore note, (perfect for those feeling less fresh than a daisy) is CASKET FEEDER – It’s clear these guys are heavily influenced by CONVERGE but the added element of blackened blast beats and lo-fi guitar riffs in between hardcore beat downs, alongside a mix of high tortured shrieks and low growls makes for an explosively powerful and varied set.
Local Leeds quartet IMPLEMENT on the main stage are also definitely pushing the hardcore side of things, the vocalist belts out angry shouts but in comparison to the amount of variety within each other band they fall a little flat
It’s been almost a year since last seeing WATCHCRIES and they are seriously tight, it’s great to see another kick ass woman (Nat Spada) at the helm of a band churning up genres and spewing out such raw ferocious emotion in a delicious concoction of d-beat ‘thrashened’ black metal.

At the Meat Locker next is WORKING MENS CLUB a quartet from London – It’s abrasive and noisy blackened hardcore with a dose of sludgy tones. Speedy sometimes technical riffs and brutal, intensely relentless vocals.
THE ATROCITY EXHIBIT a hairy trio from North Hampton get a pit going in the main stage blasting out fun fast grind-core with gnarly duelling incessant vocals, insanely speedy drumming and a little teaser of a rock n’ roll vibe behind it all. These guys are here to have fun but blast out some serious noise while doing it. In the Hot Box HARROWED, A Trio from Kent have a visceral, metallic d beat sound replete with angry crusty/punk in your face vocals yelled over perpetual d beat drumming and wailing guitar tones, they maintain a great rampant energy through-out and it’s pretty dam sick!
Southerners HERD MOVER at the Meat Locker featuring members of GRIM EXISTENCE and WALLOWING are clearly angry at the world. With a distorted grimace Zak belts out seriously pissed off snarls on top of insane drumming from Sam and Jake pounds out sludgy slowed down and sped up riffs, like a slightly progressive sometimes speedy Eye Hate God in places but always raw and dirty as fuck, much more aggressive live than the recording which is really saying something!   Quintet GRIM EXISTENCE featuring the drummer and guitarist of HERD MOVER a monstrous fucked up concoction of sludgy old school thrash metal with a strong hint of death to the Meat Locker. Blackened chunky riffs are mixed with threatening growls from front-man Marcus Broome who prowls the floor in amongst the crowd and it sure is grim!   It is sadly the last show for both the drummer and bassist/vocalist of this force to be reckoned with known as HELPLESS from Plymouth they play with a great ferocity from the start and crush the main stage with noisy sludgy, sometimes blackened, grind, massive meaty tones from the bass, powerful, intense drumming and lots of technical discordant guitar and pedal experimentation from front-man Dan Couch.
GEIST, a quintet from the North East treat the huge crowd in the Hotbox to an energetic, balls out display of a frantic mix of unforgiving crusty metallic hardcore, furious barking vocals over sped up punky drums and converge tinged wailing guitars, its fast as fuck but sometimes relents to the occasional beefy breakdown and the crowd goes mental for all of it. Vocalist …… also makes a moving speech on the importance or awareness, solidarity and support in struggling with mental health which makes for an ever more poignant performance.
Proving once again that a humble duo of guitar and drums can conjure some serious noise, Scottish lads BOAK get a raging pit going on the main stage from the offset. It’s ridiculously fast and impressively tight unrelenting fast-core. Crazy speedy blast beats, mental screeching vocals and scorching riffs and of course the odd meaty hardcore breakdown for good measure.
WREN have been making waves in the post metal scene with their take on hypnotising posty sludge and they do not disappoint, they are barely visible on a smokey darkened stage which just adds to the gloomy atmosphere perfectly, much in the vein of CULT OF LUNA but with a sludgier sound layered pedal heavy intricate textures behind bellowing raw high pitch vocals The meat locker is taken on a twisted journey through murky depths which rise and fall and build up to a powerful climax leaving many of the audience in awe and they are definitely a highlight of the day so far.
Unfortunately, there is no time to even catch a breath or stop in wonderment as its time for a mad dash across to the Hot Box to catch (fingers crossed) the last couple songs from local Leeds quartet GETS WORSE. Squeezing through a frantic mosh pit proves worthwhile as they hammer out grinding merciless power-violence to a rabid crowd teasing them with crazy fast and slow chugging riffs.
French quartet HARM DONE hammer out some mean hardcore on the main stage but its blended with a punishing mix of blast-beats to make for an exciting mix that gets a brutal pit going, there’s beat downs but no wind-milling and when the beatdowns get to slow they speed it up again with frenzied riffs and drums and manic slayer style yells.
As if the crowd can’t get whipped into more of a hyper and hectic state Saturdays headliners the almighty quartet of Finnish grind legends (who have been going since 1993) ROTTEN SOUND take to the main stage and thrash out a barrage of brutal death-grind and the place just erupts into a glorious miasma of chaos. Devastatingly aggressive vocals with an element of d beat from front-man Keijo Niinimaa (G) come thick and fast over feverish rumbling blast beats and beatdowns from drumming powerhouse Sami Latva. Mika Aalto pounds out a myriad of riffs varying from djent to sludge and back of course grind and Tristian Toivainens’ pulsing bass-lines add a hefty backbone. Feet blend with faces and enthusiastic fans grab the mic to yell along with a grinning ‘G’ There’s a bit of everything to make it a simply outstanding performance.