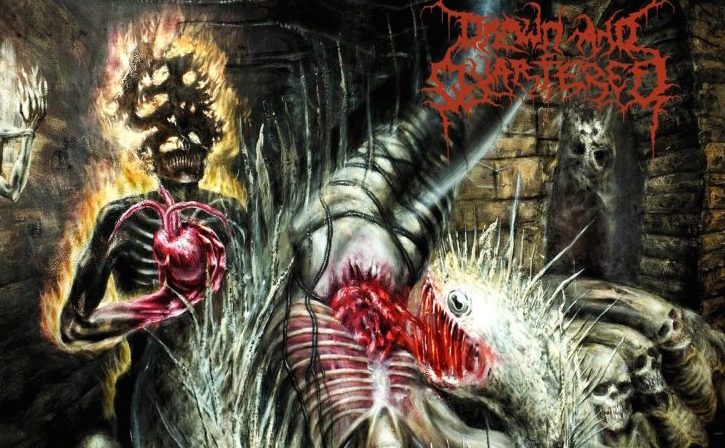 When it comes to American Death Metal, there may not be another name more underrated than Seattle’s Drawn and Quartered, a band that is every bit as consistent as it is under the radar. Each and every album in their catalog is as solid as it gets, firmly steeped in the OSDM tradition, and quite arguably, often times better than the last. I’d say this is the case as well for their newest effort The One Who Lurks, their first album released under the Krucyator Productions banner, a label run by the main man from Autokrator, who also produced this effort, and go figure, features some of the bands best sounding material to date.

Clocking in at 40 minutes strong spread across 8 tracks, this is Drawn and Quartered at their best, as each song conveys that feeling of sinister dread and eerie menace that is so expertly composed and flawlessly executed. The more I listen to it, the more I think its probably their best effort since Hail Infernal Darkness , a record I hold in very high regard as being the peak of the bands discography. And while I think its a good idea to give this album plenty of spins, as it really gets better each and every time, you can hear the overall quality in just the first two tracks, particularly on “Ravage the Cadaver”, a song that features some of the best song writing on the album, with strong riffing and utterly fantastic solo work in the closing minutes.

The following track, “Horned Shadows Rise” sucks you down the slopes of death immediately with rapid fury with a quick hitting, melodious riff that is as catchy as it is ominous – a feeling that is expanded upon in the later portion of the track when things slow down and that riff opens up a bit more for full absorption before a hard hitting finish. “Deliverance to the Worms” follows in furious fashion, seemingly catapulted by the close of its predecessor, bludgeoning the listener with double bass and twisted, maligned riffing that evokes the darkest, deepest pits of anguish and suffering. Something similar could be said about “Temples of Arcane Devotion” as well with its explosive lead work and classic pinch harmonics ala Immolation – a staple feature of this song, album, and much of the bands career. I’ve felt for a long time Drawn and Quartered might have the most (and best) prominent Immolation influence in their music that I can think of and its no different here, and something I welcome time and again with open arms, as I find Vigna’s style of riffing to be among the very best in all of Death metal.

And its this ravaging, twisted, ominous style of riffing that Drawn and Quartered employ with expert precision throughout The One Who Lurks and while each song is filled with its own hooks, “Carnal Transmigration” probably has to be the most direct, aggressive track on the album, as its double bass sections and cavernous, guttural vocal attacks are absolutely leveling and comparable to blunt force trauma. This brutal banger of a song does a good job setting up the title track as well though, as “The One Who Lurks” comes in with a sense of eerie malevolence from the start and is a nice contrast to what just came before it, as although it has its own meat and potatoes moments of butchery, it focuses on atmosphere moreso than any of the other songs with more doomy soundscapes dripping with a prolonged sense of dread and toil in the murk.

With a tremendous base of catchy riffs and horrific aesthetics at play, this most recent effort from Drawn and Quartered comes to its dismal close with a little over five and a half minutes of engaging Death Metal glory by way of “Portals of Communion,” and when its all said and done, there isn’t much here that is new, but that’s the point; the Old School Death Metal brand, while ultimately broad stylistically across the globe, didn’t get its own acronym or become synonymous with the best of the best by being a chameleon, by changing with the wind. No, Drawn and Quartered are a band to be revered in the American Death Metal scene for both their longevity and their impressive catalog of top notch Death Metal and there’s no good reason in the world for them to screw that up now, especially when they’re still capable of making a record this good. One of the best DM efforts of 2018 to date by far, this is a can’t lose purchase, buy or die!!!