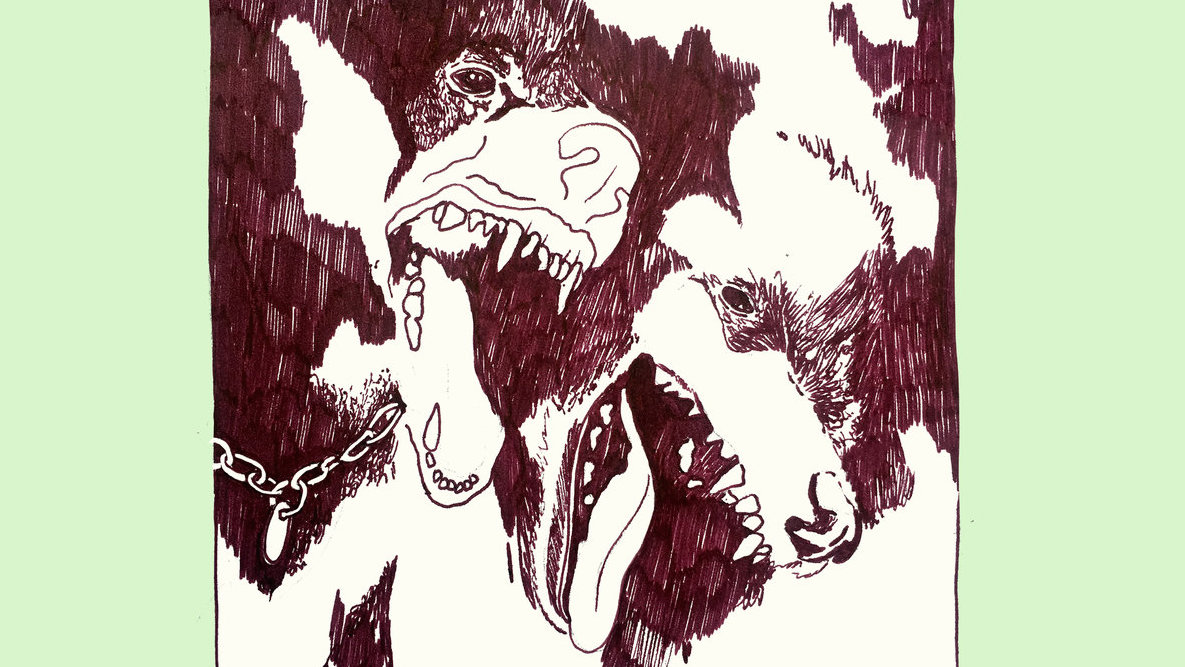 Full disclosure here… the album rollout for “Burnt Sugar”, the impending sophomore full length from Ft. Lauderdale, Florida’s Gouge Away, has been frought with impatience. Having heard and subsequently replayed lead single “Only Friend” ad infinitum only to be more stoked on “Ghost”, the anticipation had become, well, an excruciating test of “hurry up and wait.” Apparently, great art takes time.  Though both debut LP “,Dies” and the follow up 7” “Swallow b/w Sweat” are both highwater slabs of hardcore in their respective years, I’m here to reassure you they’ve fulfilled every musical promise made on their formative works. Due out September 28th via the mighty Deathwish Inc. , “Burnt Sugar” brims with both familiar touchstones and daring new turns, amplifying them both to to a dizzyingly high level. More importantly, though, the group’s return finds them equipped with far more many arrows in their quiver.

If there’s anything that immediately springs to mind, it’s that the furious pace of “,Dies” is dialed back and far more measured. Though not entirely gone are the breakneck stylings of their debut LP, the mastery of mid-paced bangers and nuance are on display immediately. Gouge Away still manage to outdo themselves on “Fed Up” and “Can’t Relate” both of which find them bashing out short, jangled bits of hardcore fuzz. “Hey Mercy” peddles similar wares, but trades the straight ahead punk fury for discordant guitars, scrapes, all awash in a glorious wall of noise. They manage to weave a mangled tapestry of early USHC punk and 90’s Sub Pop in a way that’s uniquely their own. The bisected title track “Stray/Burnt Sugar” manages the snotty aesthetic and mythos of Sonic Youth at the peak of their freakout powers, finding its melody in defiance of melody itself. They further indulge their embrace of off-kilter rhythms on “Slow Down”, which conjures lost bands from the Dischord roster; those gloriously unafraid to stray from their past in both a daring and honorable trajectory. Again, there’s nothing on “Burnt Sugar” that resembles the outright sensibilities or immediacy of  “Until Every Cage Is Empty”, but the product is all the better for it. As glorious as the faster bursts of noisenik hardcore are, it’s in the slow burn that the album finds its true stride. “Ghost” is a masterful and melancholic midway, slicing down the center of the album as an echoey and moody burst of drone and contemplation. Closing track “Raw Blood” proves to be a fitting finale; an inverted and uglier mirror image of “Ghost”, devastatingly vague and unsettlingly anguished. Lyrically, Christina Michelle’s impassioned vocals seemlessly and deftly vacillate between isolation, empowerment, and longing. Navigating political waters without resorting to sloganeering or the “bumper sticker”-isms of lesser bands, Gouge Away manages to find a balance.

Mixed and mastered by the venerable Jack Shirley and produced by Touché Amore’s Jeremy Bolm, there’s an organic richness that belies a band that’s locked in enough to explore the songs. Clearly confident and comfortable with each other, there’s a serpentine quality to the bob and weave of the instrumentation. Lest I forget to mention it, the bass tone they achieved on “Burnt Sugar” is, to these ears, unparalleled. Siphoning from the classic Amphetamine Reptile stable of bands mixed with modern and crystalline production, it’s the best four string sound this side of The Jesus Lizard.

“Burnt Sugar” has ultimately led me to a conclusion. In both name and sound, it manages to capture the duality of a band equally capable of the furious and charging hardcore of modern times and mining a mid-paced, thickened grunge sound. As barbed and scorched though it may be, it belies a sweet and melodic sensibility buried beneath the grime. Truly a triumph and a step-up in every way, Gouge Away just upped the game. It’s with equal, giddy impatience that I await their tour with Culture Abuse. It’s in the live setting that the band truly reveals its myriad powers. Don’t sleep on them.