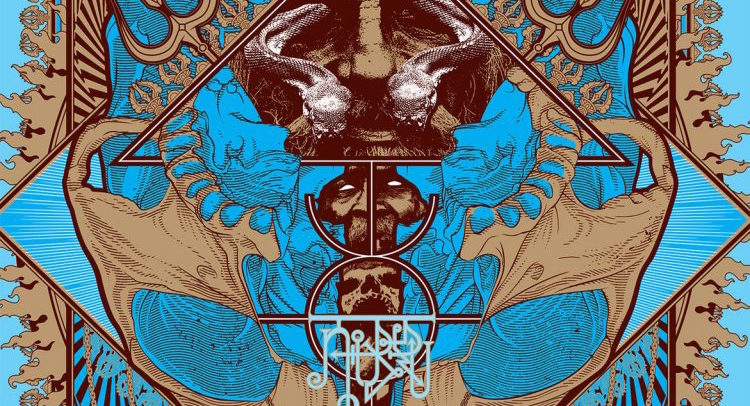 Ritual Productions has become widely known for its focus on the obscure, meditative edge of doom metal. Through the years the London based label has released works by the likes of punk obsessed, doom/sludge outfit 11Paranoias and psychedelic doom astronauts Bong. This roster is now expanded with the addition of Italian fiendish alchemists Nibiru, who have been flying under the radar for the best part of the decade.


Nibiru is quite an interesting act, featuring a much heavier dose of bitter psychedelia within their convoluted themes. Through the years they have produced a very interesting collection of works, fuelled by their unusual combination of influences. Their first four records all carried this off-kilter identity, combining the hazy essence of psychedelia with the dark, cosmic energy of drone and a touch of black metal aesthetics for good measure. The band’s return now with Salbrox, sees them diving even further within this hellish realm to bring back their finest work to date.

Nibiru has always relied heavily and put a tremendous amount of emphasis on the ambiance of their works. The kickoff with “EHNB” illustrates that fact straight away, with the band conjuring its dark and bitter brew of psychedelia, while relying on a minimal instrumentation and ritualistic pace. Caustic vocals and dissonant effects take their place in the background to fully realize this hellish interlude, awakening a voodoo-like sense as time passes.


But, what is intriguing is that by creating that unearthly basis, Nibiru subtly infuse the record with an inherent sense of continuity that they can now call upon when exploring all their twisted ideas. A prime example is the venturing into ambient realms with tracks like “ABALPT”, plunging the whole world into a state of darkened, introspective meditation. It is just another facade of the band’s shamanic quality and it also allows them to fluidly move into a more emotive manifestation with moments like “BITOM”, as they divulge in some sorrowful piano notes to create a melancholic scenery.

Yet, Nibiru take more significant steps towards off-kilter territories, at times arriving with an improvisational attitude. The obscure, serpentine progression of “HCOMA” ties in perfectly with the band’s ritualistic framework and actually injects a menacing sense of unpredictability within the track’s progression. Coupled with the demonic quality of the band’s psychedelic point of origin, this procedure becomes something utterly overwhelming in rapid fashion.


Even though Nibiru still return to a doom foundation, awakening the grit and dirt of the genre, they always perform this transition while retaining their surrounding characteristics. “EXARP” is a perfect instance of this mentality with the band incorporating their atmospherics and theatricality on top of the heavy riffs and constructing an imposing, heavy doom beatdown. The closing track “RZIORN” performs a further clinic into this concept, tying together perfectly all the neighbouring aspects of the band’s identity. It summarizes perfectly both the record and displays the full force of Nibiru. This band is not contempt with relying on traditional doom aesthetics and conditions, and instead travels further outside the genre to discover its own path.