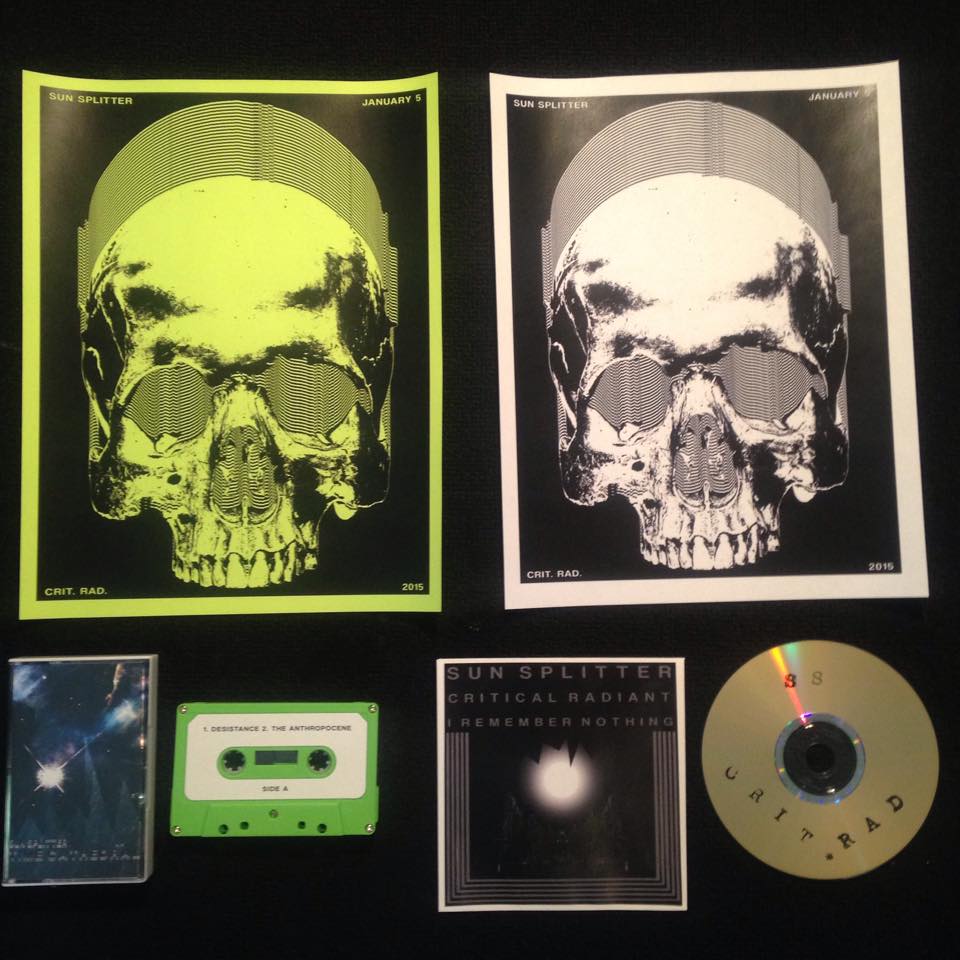 This album is another testament to the fact that they must have good drugs in Chicago, as their effects continue to echo in the music billowing out of the Windy City. The tradition of this chemical wedding is being carried on from the days Charlie Parker, but switched from doctor prescribed morphine to heroin. Doom owes a great deal to bands that came from the drug haze of the 60’s, who lend themselves to this darker psychedelic dive that Sun Splitter takes a step further with “Time Cathedral.” This sonic spiral goes beyond stoner rock to brazenly freebase the weird. The intro wavers in the noise-ridden ambiance before they unload their first track – a deeply unnerving dirge.  An eleven minute one that plods along in space waves until a chanted vocal comes in toward the end of the song. They pour themselves from one dreary epic sprawl to another, with chanted vocals and guitars creeping along the dark road they drag you down. The vast riffs echoing into your psyche are similar to those utilized in the more forward thinking funereal doom bands; they are very spacious, and in that space is where the tension lingers. There is not that mournful, dirge-like quality funereal doom holds to what Sun Splitter do. Instead, they indulge in something more cerebral than it is emotional. Shout out to labels: this album deserves the vinyl treatment!

“Star Lit” builds in tension, but not the kind of aggression metal is noted for. They are metal and they are heavy, but they go about this without dropping the oppressive weight most doom bands carry. In some ways, it reminds me of Megaton Leviathan in that regard. Once you are ten minutes into it, you realize this chanting is where the vocals are going to remain, with trickles of sample chattering underneath the ending of the song. In the final minutes, the song builds almost in a proggy, Tool-like fashion, but free of the 90’s nu metal trappings.The shortest actual song is the title track that closes out the album – it takes on an almost industrial element, and when you tread the line between doom and industrial, you are crossing over into the more sludge-ridden atmosphere that makes up Neurosis territory. Rather than bringing the calm before the storm crashing down, they opt to fade out into a swirling cosmos.

This album is great for long rainy nights of bong worship. If stoner rock has always come across to you like someone playing tuned down and fuzzed out Ace Frehley riffs, and you don’t like to think of doom as slowed down death metal, then these guys are plugged into a current that will turn on. It has already resonated with many, because the tape is sold out, so now you have to go to Bandcamp to get the album. This release is unique; if they had allowed themselves to be swayed by conventions and expectations of what doom or even metal should be, then it would not have the same spark of originality that propels this album.