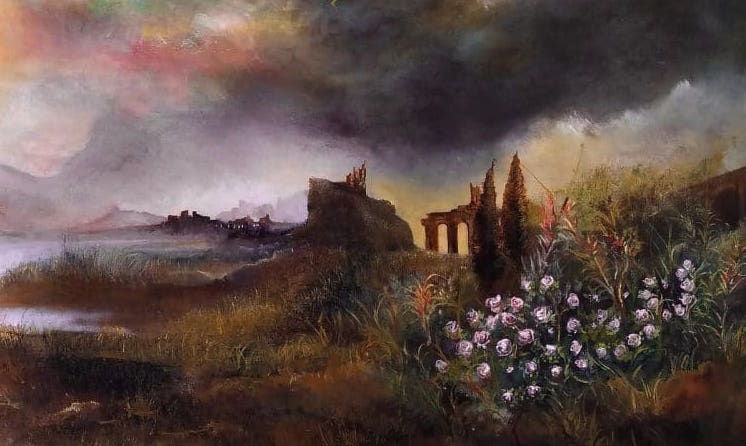 Listening to UN is not really the best idea if you’re preparing for a big night of revelry with friends. By the time you’ve listened to all four tracks you’re far more likely to want to crawl back into bed and pull the covers up over your head than go out for looking for love and laughter. Sentiment is the Seattle doom quartet’s sophomore album, and as with their 2015 debut The Tomb of all Things this is a painful and poignant listen that will toy with your emotions and at times reduce you to a quivering mess.

The four song titles act as a window into the mood swings within and the universal feeling is one of distress and loss. ‘In Its Absence’ is a haunting opener, as ever with UN moving at an almost Neolithic pace, with its ambient flow occasionally disturbed by a few more robust tremors. Monte McCleery’s vocals have a deathly pallor, a croak of finality, that merely reinforces the impending feeling of angst that unites each track.

At the time of writing the first UN album McCleery – who many will also know through his work with the stunning Seattle outfit Samothrace – was fighting not just emotional battles but physical ones too. Fortunately he came through a serious health trauma to continue his life and of course his bands. So facing the very worst that life has to offer possibly comes easier to a person who has endured such experiences in the raw.

‘Pools of Reflection’ is an even more somber listening experience than the opener, fleeting female vocals casting an ethereal sheen. After about five minutes UN inject another layer of heaviness although the tempo is still defiantly slow. While doom bands naturally find themselves drawn to life’s final journey, UN actually focus on the living rather than the dead. But within that realm, they probe at the inadequacies of life, human shortfalls and frailties. The title track takes its cue from the Nietzsche quote… “What have we in common with the rosebud, which trembles because a drop of dew is lying upon it?” The German philosopher neatly referenced the rose as a thing of beauty and yet one, through its prickly stem, capable of inflicting pain at the same time.

That is the sentiment behind the title track of the same name on which the mood warms a little, the tones are slightly richer and the soundscape marginally more embracing. As usual with UN the riffs amble rather than rush, allowing full absorption through shimmering repetition. Vocals are sparse and harsh, occasionally darting in and out as a reminder of the human presence, but UN are very content to give full rein to the music alone.

The 15-minute epic closer, ‘The Garden Where Nothing Grows’ brings Sentiment to a superb if steady climax. On an emotional level you can draw comparisons with Yob, whose own singer Mike Scheidt has had his own significant health hurdles to climb over these past couple of years. But purely taken on a musical level, UN’s funeral delivery has more in common with the likes of Bell Witch, and in places Pallbearer – although not from a vocal standpoint, with McCleery’s larynx working on a lower level.

So by all means go party if you must… but when the time is right for something less frivolous than turn to this album and UN will accompany you down the lanes of lament.

Out now via Translation Loss Records