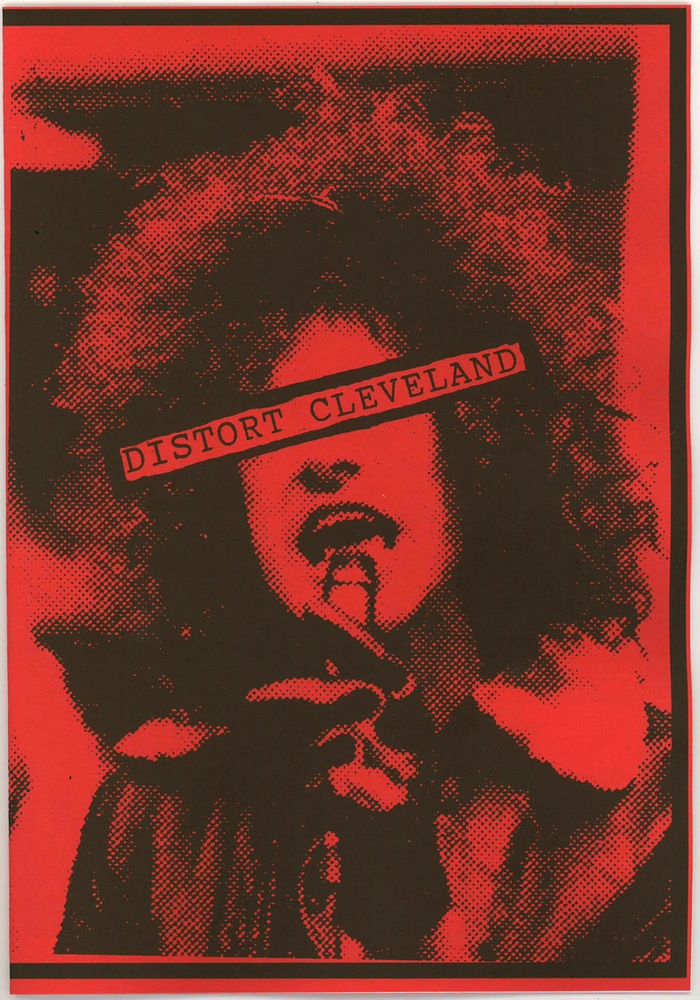 During an h100s concert, frozen cats were thrown into the audience.

At this point, Daniel Stewart is better known for Total Control than for Distort Cleveland. He’s the virile track-suited one straddling that monotone croon and then yanking one into a husky bark. Despite the newfound fame, he’s known for “Australia’s Only Magazine,” Distort. And if you are feeling financially unbound, you might cop the three issues of Kinks criticism he has produced, Life Stinks I Like the Kinks. He is punk’s man of letters.

He saw in Cleveland the “alienated, hostile air” first in its straight-hate edge scene then in the city’s more absurdist unraveling.

Distort Cleveland has reached issue two. The zine is a compendium of the Cleveland punk scene bespattered with ads for Systems Overload and interviews with 9 Shocks Terror. It is not a history but a collection that page after page is a map of the music scene ever changing.

There is an article on Patti Smith’s visit, which the Pagans opened. That fragment marks the catalyst for the Necros who drove home from the gig.

Then there are the stories and their nicknames, “Y’know what, 3Gun is a professional rager.”

“The first song is about drugs. The second is about beating up skinheads.”

Most of Distort Cleveland you wont know because you weren’t there. Stewart doesn’t bother with context. The non-reason only compliments Cleveland. It produced these bands because there was nothing and that breeds boredom that spurs music.

Distort Cleveland is not really a collection of writing, but a bunch of interview snippets, fliers, photos and related ephemera. I decided to use as source material a lot of old fanzines I have, but also fliers I’ve collected over the year and bits and pieces from Distort, which originally was called Distort Cleveland and was just going to cover Cleveland bands.

Where we have arrived is in the 90s, and yet never beyond the 80s because there is Rocket From the Tombs, and sentiments by lesser-known bands like Gag Reflex. Stewart tells me, “The next issue is all about Cleveland thug rap group Bone Thugs N Harmony”.