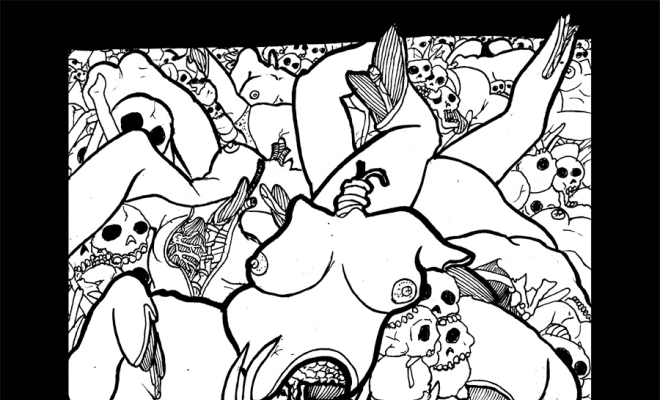 Former Relapse Records art director Jonathan Canady has been indulging himself in mud, malice and madness since he made the decision to alter his medium in music from metal to power electronics. In excess of some fascinating visual work, his most recent musical offering, a re-release of the 2005 Deathpile compilation “Final Confession”, is one fine instance of his vision. Architected using flangered spoken words and fuzzed out electronics, the reaping is warm and squeezing; which is also what redlines power electronics and/or death industrial from harsh noise at an elemental level. In “Final Confession”, the imagery has to be despicable. And every single ingredient of this sonic dish is as tainted as it’s intended to be; amounting to Nicola Vinciguerra’s artwork as well as the track names — i.e. ‘Shit Pig’, ‘Abominations Of The Flesh’, ‘Blunt Anal Trauma’. “Riding through western Philadelphia on the elevated train is a regular part of my life. From those windows I see decaying buildings and machinery, tangles of aging wire and seemingly endless arrays of outmoded TV antennae. These sights are simultaneously repulsive and beautiful to me.” -Jonathan Canady

Death industrial may be still way off the masochistic array of thought, but it certainly evokes such reasoning at least in people who don’t understand noise music in general or those who think of the ideas discussed as repulsive in the way that it should be forbidden. So, before anything else, how else could it be masochistic? If you got to watch Polanski’s “Venus In Fur” last year, I assume you now know how typically wrong both the BDSM and academic thinking about Masoch’s works are. A typical self-claimed masochist talks of self-sacrifice and total obedience – but is it really that simple, the case of slave and master? Of course, the relationship between the apparent slave and master is more complicated than that. Deleuze writes extensively on that matter in “Masochism: Coldness And Cruelty”:

“While the sadian hero subverts the law, the masochist should not by contrast be regarded as gladly submitting to it. The element of contempt in the submission of the masochist has often been emphasized: his apparent obedience conceals a criticism and a provocation. He simply attacks the law on other flank.” The other peculiarity has to do with the admittance of the repulsive characteristics. I think that also counts for Canady’s metal lineage, the relation between the extreme forms of experimental music and metal music; and the primary force that materializes metal music and makes it happen, that is how the voice of super-ego is transfigured into the animal voice of music.

“The sense of guilt, the harshness of the super-ego, is thus the same thing as the severity of the conscience. It is the perception which the ego has of being watched over in this way, the assessment of the tension between its own strivings and the demands of the super-ego. The fear of this critical agency (a fear which is at the bottom of the whole relationship), the need for punishment, is an instinctual manifestation on the part of the ego, which has become masochistic under the influence of a sadistic super-ego.”

As with Freud’s account on the super-ego in “Civilization And Its Discontent”, we can come at the point that this part of one’s psyche is even wilder than the id, contrary to what is usually believed. Super-ego is to maintain law and order, but it is not to be read as the ultimate solution, and I think most punks know what I’m talking about; to describe super-ego is to think of the police, or pigs if you don’t mind me saying. The police is also supposed to bring justice and peace and it too fails, turning out more corrupted.

One way to reason the birth of metal is saying with every movement always comes an opposite movement; we had the romantics, and then came the naturalists, and so here we had the hippies and then the punks and so on. But that would be the most naïve answer. If metal occurred, it wasn’t for a facile disagreement, but for the hippie’s way of eulogizing the id and tuning the super-ego out had only given the super-ego more ferocity.

“See the portal, gate to madness
Locked forever in a veil of shame

The foot of the stairs, dimension in might
The king sits, his eyes are glass

Growing of the small – The laughter’s fall
Can you deny – Remaining cries?
Descent of the lords – Into the trap
Existence and hate – Unseen gate

No matter how tempting, it’s fairly out of place to interpret Celtic Frost’s lyrics to ‘Dethroned Emperor’ as if they were to indicate the fall of a paternal authority, so I’m just gonna leave it at that. Shame, regret and repent are both recurrent and ineradicable in metal lyrics, and so they lay out the link with the super-ego. At any rate, what metal does is not beating the drum for the super-ego’s never-ending orders, but in lieu, de-morphing it thru the medium of music. Sublimation in the case of Slayer happens not through the channeling of suppressed desires of the id, but the channeling of the bombardings of the super-ego. Thus, the brutality observed in metal is the transfiguration of this sickening agency into sonic flesh and blood. And one has only got to see the laughing face of Kevin Sharp, at peace with his family, to know how squarely this process works.

The ever-vomiting sound in “Final Confession”, starting from ‘Walking Time Bomb’ to ‘Slaughterhouse Pornography’, is one warm sonic hell ready for you, the listener, to bathe in and to realize your own sublimation. Have a nice blast. 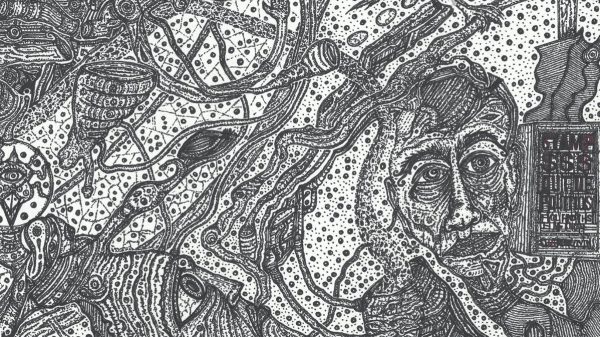 Many of you readers at home who are a part of the noise community (is it really a community?) are probably already familiar with...