Masterfully compiled by Joe Truck Kasher and Greg Fasolino (of NYC’s deathrock band The Naked and the Dead), this compilation has the added benefit of being produced by folks that were active in NYC’s postpunk heyday. In other words, it comes from scene participants themselves; not outsiders. And while California’s and England’s gothy postpunk scenes have been exhaustively documented, an adequate cataloging of NYC’s similar scene in the 1980s has been much overdue. This compilation remedies that longstanding problem.

In reality, starting with the Velvet Underground, dark music has been no stranger to New York. The city’s shadowy concrete-and-steel canyons seem to breed bands with darker inclinations. The no-wave scene that produced Lydia Lunch and The Swans should be seen on the same continuum as the bands featured on this anthology. NYC’s mid-80s dark postpunk band Of a Mesh, in fact, resemble a lot of earlier Swans (mixed with maybe some Bauhaus) material at their best.

The opening track is Scarecrow’s “Blood in My Dreams,” an atmospheric gothic rock song that recalls Join Hands-era Siouxsie and the Banshees. The second track is a heavier, stompier number also by Scarecrow, a kind of strange cross between Siouxsie’s “Spellbound” and the UK gothy postpunk (or so-called “positive punk”) of bands like Brigandage or Blood and Roses. Lots of flanger effects on the guitar and tribal, heavy-on-the-toms drumming, as was common in the UK’s dark postpunk scene at the time.

The amazing Of a Mesh (see the video at the beginning of this write-up) are probably the most direct sonic link between New York’s deathrock scene and The Swans, or 4AD bands like Mass. Sludgy, dark, and depressive vocals echo out over a musical landscape that is at turns melodic, dissonant, and dirge-y. Of a Mesh have always been one of the most fascinating US dark postpunk bands to me — they really seem to have never gotten their day in the sun. As the internet has enabled a retroactive inspection of a lot of this style of music — music that in the 80s could only be found by being supremely in the know or by scouring record shops or zines for hours — I hope that Of a Mesh’s profile is raised as an important US postpunk band. Hints of Killing Joke (check out the awesome drumming!) and the Sisters of Mercy permeate the band’s sound.

The Naked and the Dead chime in next with female vocals slightly reminiscent of Gitane Demone. Again, a mid-tempo beat featuring flangers on the guitar and tribal drumming — done to very excellent and creepy effect. Sometimes, location is key; if The Naked and the Dead’s particular style of gloomy postpunk had occurred in London at this same time, they would be much more appreciated than they are now. Most folks now think of NYC’s contribution to deathrock as being mainly from the horror punk innovations ofThe Cramps, and (from New Jersey, actually) the Misfits, Mournful Noise, and The Mad. The Naked and the Dead are a key band that show that, as one branch of the original 1977 punk scene was going off into thrashy NYHC, another segment was absorbing the influences of Sex Gang Children, Killing Joke, Virgin Prunes, et. al., and was producing top notch gothic rock and roll as a result. It is as an important development from New York’s punk scene as the much-vaunted hardcore of Youth of Today and Gorilla Biscuits was. Again, this compilation documents this trend magnificently, and is much overdue.

Children’s Zoo weigh in next with “Turnabout,” which is musically like a an early PIL song, and the vocals are done in a very echoey, dramatic Christian Death/Rozz style. The music overall is what is now called the “trad goth” style — basically, a Sisters of Mercy-esque style of gothic rock. The vocals are echoey and front and center. If you are looking for 80s New York City gothic rock, well — here you go.

The Ochrana feature one song near the end of the comp, and yet — as the video below makes abundantly clear, this was a serious gothic punk band, who deserve serious attention. The Ochrana song featured on this compilation, “Turnabout,” is actually a classic early Joy Division-style somber postpunk number that explodes during the chorus, but then quietens down back again for the “verse.” A “complete discography”-style release of the Ochrana’s material is certainly in order. The Ochrana were an amazing deathrock/goth-punk band, and their “discography” is traded as a bootleg and floats around on mp3 filesharing networks among fans of deathrock. They need a proper, holistic release. Also, I absolutely LOVE that they tout “tribal drumming” in the interview below – yes! They clearly know what they are doing. Tribal drumming was a feature of a lot of early 80s gothic/deathrock/goth-punk bands, from Killing Joke (see: “Unspeakable”), to Christian Death, Southern Death Cult, to New Model Army, to even the early 80s Cure. It’s a lost art. Work those floor toms, you bastards!

To get this vinyl-only comp, here is the info Joe Truck Kasher himself gave me: $18.00 POSTPAID!!! PAYPAL- TRUXDIX@AOL.COM 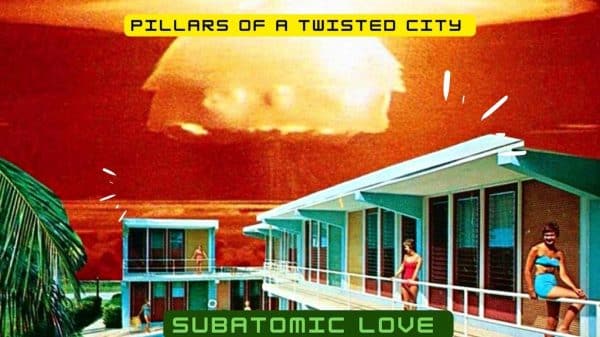