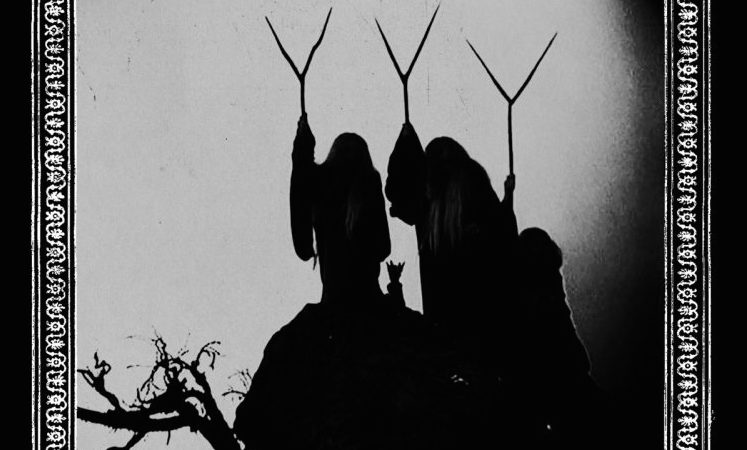 If Hallelujah! was a full ritual, then Sulphur Soul is like Cliff Notes. It contains aspects of Gevurah that show why they’re great but shouldn’t be considered a full experience. Sulphur Soul is still quite immersive though. The EP kicks off with the massive “The Putrid Stench of Rotting Flesh”, and immediately it feels like the band is at home with their sound. Massive and howling; their riffs and drums sound like the gates of Hell are blasting open. It’s been seven years since Craft laid out a full length, and metal empires have risen and fallen.  It’s appropriate that with opener “The Cosmic Sphere Falls” coalesces around timeless themes: depression, dread, apocalypse, death and destruction.  “It is eternal. It is beyond.”  The winding, interweaving guitar lines, slightly askew time signatures, and whispered/screamed lyrics are hypnotic and terrifying – almost avant garde but simultaneously catchy.  The bass is palpable and there’s nearly no midrange – in my ears a perfect black metal balance.  And while the drumming is amazing, it’s not overly busy.   Lyrically, “Again” is far more harrowing than the icy cold opener.  A description of self-harm descending into self-annihilation, it’s juxtaposed against an undeniably hooky guitar line and rhythmic stomp.  The dual guitar leads of Joakim Karlsson and John Doe, skewing off into discordant tremolo bursts, are sickening, while the double-time bursts are oddly affirming against such miserable themes.

Words via The Sludgelord Blending hints of Emperor, MGLA, Abigor, Dissection and similar epic and more “frenetic” black metal, with their vibrant wall of riffs and blast beats Spectral Wound open a portal to a dark and desolate dimension which is restless and in constant motion, bringing wave upon wave of irruent and gushing dark matter toward the listener like a wall of shimmering and otherworldly tide. Formed in 2014 in Montreal, Québec, as a vessel of self-negation and existential dread, Spectral Wound meld the raw fury of traditional black metal with the melodic sensibility of Finnish and QCBM. Wiegedood return with their third album, De Doden Hebben Het Goed III.  This album serves as part 3 to their album series dedicated to the loss of their good friend, Florent Pevée (from the band, Kabul Golf Club).

Wiegedood are a black metal trio from Belgium, consisting of members from both Oathbreaker and Amenra.  Interestingly, no bass is present, therefore just the two guitars making up the sonic palette for this band.  The clever interplay between the guitars ensures that a full range is covered, negating a need for the bass. I think this aspect adds to the band’s uniqueness in sound, despite the quintessential black metal moments that litter the album. Here, Solar Temple, sharing a name with an esoteric suicide cult, bring us a combination of the lot with two sustained pieces spanning nearly forty minutes in all. ‘Those Who Dwell in the Spiral Dark’ is the fantastically named first track, not just for its shrieking Lovecraftian space-twirling implications, but because spiral dark is a perfect description of the strange fractally changing then insistent consistent riff that begins, firstly with steps around the drone and then in unmoving motion on a constant chord. The shadowy voices in the background retain a detached sombre calm, preparing for the jerking, halting version of the riff later, and after that, a pool of slower oily sonic ripples. The remaining third of the track is a brilliant occult metal incantation, right up to its raven precipice dive to finish. Taste in Pain is the latest outing on Fallen Empire Records and is another jarring example of an album that knows how to work with what it has and doesn’t need much more. The dissonance and blown out instrumentation does all the talking as it forces your attention and hits you in the face repeatedly with violent impetus. Not even many fancy riffs are needed. From the very beginning, Self-Punishment opens things up and wastes not a single, solitary fucking second in sonically belaboring you with blown-out guitars churning out grimy, muddy chords, loud, pounding drums ranging from relentless blasting to intensely catchy grooves, fuled with the same attitude and bluster as bands like Akatharsia, Ritual Knife and Grinning Death’s Head are known for having, but turned up to an even higher level of ferocity. Continuing the gnarly grooves right into Fresh Meat, no sign of slowing down is seen nor are you given a chance to breathe as the band’s sound continues to bludgeon you with every passing second.

Words via Thy Kingdom Scum Unholy fuck, Caligari Records done it again and are set to release one of my new favorite bands – NyreDolk. This demo has been on repeat all day and and will stay that way! This band creates the kind of blood-soaked blackened punk I go fucking APE SHIT for! This demo is a non-stop braincell-banging affair and I just want to hear more, like RIGHT NOW! Press play below and allow NyreDolk to inject you with their sinister riffs that never let up. There may be some explanation out there in the interhole about how to pronounce this band’s name, but because I’m hurrying I haven’t looked. As I read it, it resembles the sound I make when clearing my throat upon awakening after a night of too many cigarettes and too much booze. Fortunately, the music on the band’s debut album sounds much better. In fact, it’s so good that it’s startling, and often stunning.

The sound is absolutely wild, like a loud, torrential storm, like the opening of immense roaring thunderheads from a roiling black sky, with flashes of lightening. It’s often near-cacophonous in its intensity, yet it doesn’t take more than one listen to perceive the technical intricacy of the instrumental performances, from the constant surprises offered by the rhythm section to the extravagant inventiveness of the guitarists. The ingenious production quality permits all these components to shine through while still allowing the combination of them to strike with shuddering power. As the album’s title might suggest, these seven tracks sound as if they were recorded in a vast sepulcher far beneath the surface of the earth, all the shuddering and shattering tonalities drenched in reverb, the music profoundly haunting and deeply oppressive in the weight of the desolation it conveys. The album is sweeping in the scale of its apocalyptic grief and shattering in the intensity of the pain it channels into sound — an expression of emotional collapse that’s so profound it begins to seem majestic, an intense and immersive experience so all-consuming that it swallows up the listener, as if engulfed by the maw of a leviathan. Consisting of six tracks of dismal desolation and wretched atmospherics (and now featuring H.V. of Wormlust/Mystískaos fame on vocals), the album slithers relentlessly for forty minutes across the full spectrum of the most demoralizing strains of black metal, using its trance inducing mid-tempo crawl to draw the listener into a twisted and unforgiving shadow zone of total dread. While the music qualifies as “raw” black metal for its simplified and stripped down approach the riffs are actually quite baneful and the production allows for an immersive and listening experience that is far from raw, but rather offers a dimensional deepness that is crucial to its nightmarish atmosphere, not far from what we have seen in bands like Craft, early Shining, Silencer, Xasthur or even Drudkh and MGLA, The fantastic Fallen Empire Records recently rejoiced us with a new throw of numerous interesting releases, including a new EP by Serpents Lair with which Denmark’s finest strikes once again three years – and with a lot of technical delays – after her great debut long distance ” Circumambulating the stillborn “. TWELVE: Rites of thy Degringolade The Blade Philosophical

Edmonton, Canada’s Rites Of Thy Degringolade, active since 1997 no less, are another band that I discovered only recently upon causally stumbling upon their recent live reappearances (2016 California Deathfest first, last year’s Covenant Festival again), and if I’m here writing about them and their new album today, you may have already guessed that this is because they blew my fucking mind when I saw them play live and I’ve been a fan ever since. Their two recent live sets I was lucky enough to witness were absolutely punishing, and one of the most vile, captivating, and fucked things I have ever seen, and the reason I did not know much about this band prior is because they’ve been inactive and or disbanded for nearly a decade, before resuming live rituals and recording again only around 2016. Today Nuclear War Now! Prods. has finally issued The Blade Philosophical – their first new full length album in over fifteen years and it’s a fucking harrowing mental trip deep inside the most tangled realms of madness. THIRTEEN: VILKACIS Beyond the Mortal Gate

Classic doesn’t necessarily mean the Norwegian bands of the Helvete set; though the project certainly adheres to Fenriz’s imposition against clicky tech-death style drums (thank goodness). The first band that comes to mind when listening to “Defiance” or “Sixty Three” is actually Quebec’s Forteresse. There’s a spirit of longing combined with a triumphant defiance that echoes the aesthetic of Métal Noir Québécois. This is especially true of much of the guitar work, with riffs piercing the foreground with high-pitched notes carrying a song’s central narrative. At other times, the band also bears some similarity to atmospheric greats like Winterfylleth and Drudkh, but with enough distinguishing factors that set it apart. Some of the song structures even remind me a little bit of Let the Devil In-era Sargeist…minus the Satan part, of course. While it’s been a long six years since the band released their stunning debut album, Flesh Cathedral (which, I’d like to point out, is just as virulent and as visceral now as it was on the day it was released), these masked purveyors of metallic mayhem have been far from idle during this period, producing several EPs and tearing down stages worldwide, in a continued effort to hone their craft into an even more lethal form, all of which has culminated in the six scorching tracks which make up their brand new record, Revelations of the Red Sword.

Word via No Clean Singing