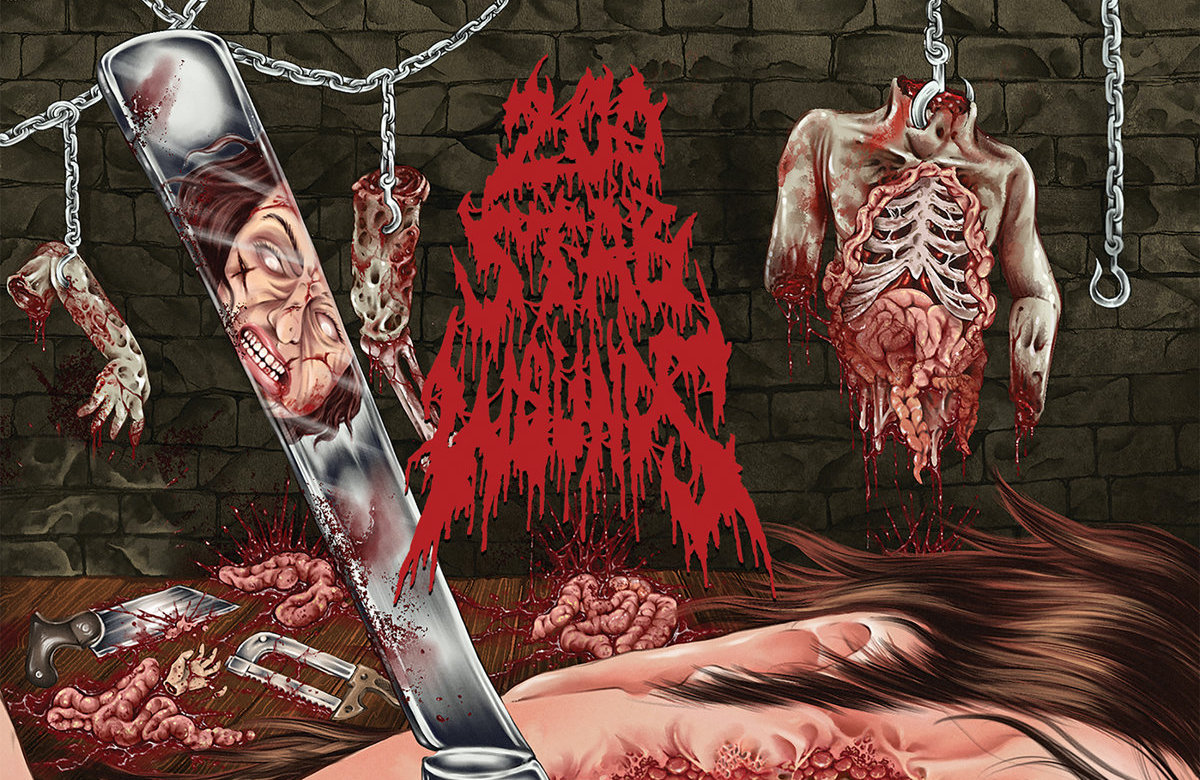 A lot of people will immediately remark on how old-school this album is, harkening back to the early days of Death when it was either all about Gore and Horror or about Satan (or about both!). I get that and yes, this album truly does recall those times of yore. But what will get lost in the song titles, the giggling over the blood and the speed, is how truly groovy this record is. It stomps at times, and I mean, the good kind of stomp, where your head is banging and you’re grinning from ear to ear as these Cleveland, Ohio boys catch a riff and crack you right over the skull with it. “Slave to the Scalpel” is the first album by 200 Stab Wounds, and I certainly hope it won’t be their last.

Out of the gate, you notice the drums. How can you not? Underlying a sick sample about carving flesh, they come rumbling in, all thunder and doom, roiling across a black-clouded sky, echoing through the canyons of your mind. The guitars roar in next, low and angry, letting you know right away this is Death Metal proper, nothing fancy coming your way. And that bass! Deep rumbling underpinning it all, the true glue holding it all together. If that doesn’t seal the deal, then the Voice rips through, and the opening track “Skin Milk” is well underway, fast and loose, rattling and deadly. Quite an intro and the rest of the album lives up to the start.

Hey, you – come over here so that I can turn you on to the new Grave Miasma song “Erudite Decomposition” from their upcoming album Abyss of Wrathful Deities. This sonic demonic Death Metal beast comes out on May 14th via Dark Descent Records (US) / Sepulchral Voices (Europe) to say that I was impressed would be a lie because I’m fucking beyond impressed. Straight up, yes, you will encounter thick caustic riffs that will almost choke you out with each listen. What really gets me hyped about this offering is the complex song structures. At times, I feel like Grave Miasma is channeling pure hate through the lens of a satanic free jazz band high on the toxic fumes of death itself!

How do you like your Death Metal served? I like mine served RAW AF! This is why I’m hooked on Hyperdontia’s Hideous Entity. It’s time for y’all to die a putrid death at the hands of this killer record!

It’s fucking ON and y’all better get with the program: SNĚŤ’s Mokvání V Okovech is one of the best Death Metal records of 2021, REAL TALK. I can’t get enough of this record because there are no cliches. Their songs are places full of RAGE where only the strong can survive and their breakdowns are full of havoc. I don’t know why, but I get a Hardcore vibe from this band and I’m not mad at them for it at all. SNĚŤ have this insanely awesome shroud of sinister groove to them that keeps me coming back for more. Mokvání V Okovech is one record that I want on vinyl when it comes to this genre. The sonic war is real and SNĚŤ is the general ready to lead us all into battle. I want to say I have nothing but respect for this band — y’all brought the motherfucking pain on this ONE!

WTF WTF WTF CONCRETE WINDS are fucking beyond AWESOME!!! Their new album Nerve Butcher is a HUGE can of sonic murder killing everything around US!

Lilim was written with the express purpose of being an opener that sets the tone right out the gate: we’re here to kick your fucking head in. I love the way albums like Passages into Deformity and De Anarkistiske An(n)aler open with these whirlwind assaults on your senses, and I wanted to follow that violent tradition.

Maenad starts off at a crawl, the sonic opposite of what you hear in Lilim, but gradually builds up its intensity as the song unfolds. Personally, I wanted to have something that was plodding in pace without delving into the type of Incantation worship that we’re all so familiar with. I feel like the brutal death metal influence starts to announce itself on this song in particular, as there are a lot of subtle “Diego Sanchez moments” with the guitars peppered throughout.

Has ALTARAGE ever let us down? Hell NO and their new album Succumb proves that again! Press play and allow the audio homicide began!

Conceptually built around the cryptic mathematical laws which rule and define the physics of total chaos, with Vacuum γ​-​Noise Transition DSKNT has challenged humanity’s perception to set it against the odds of complete ruin and abandon, weaving an impenetrable and multidimensional aural monstrosity that preys upon human senses like a black hole devours matter. The immense album pits the listener against forty-plus minutes of complete aural inhumanity; forty minutes that reveal themselves to be both nightmarish and unforgettable. The key to this abhorrent aural kingdom is forged deep within the primeval laws of French black metal, mutated from the otherworldly deformities of ambient and avant-garde death metal like Portal and Teitanblood, and then soaked into an abyss of LSD and of total disassociation to ensure the complete fragmentation and ultimate annihilation of the mind which lays its ears upon it.

The escape of reality of death metal, the anger and bitterness of punk, the hatred and nihilism of harsh noise, all this is HUMAN FAILURE, one-man raw death metal terror commando from California that summarizes the utter horror, senselessness, and everyday absurdity that is living on this planet as a part of the aberrant and embarrassing species we belong to. A sonic manifesto of unapologetic refusal of all that mankind is and stands for, HUMAN FAILURE spews forth a churning cesspool of rotting bile and weaponized hatred crafted with the intent of incinerating humanity and humiliating it with an unbearable barrage of raw violence and hostility to make it crawl back into the swamp it evolved from.

#1 Our Place of Worship is Silence Disavowed, and Left Hopeless

This is more than just a Black Death masterpiece—it’s a piece of sonic history that points a mirror at the filth of the world. These two musicians have been able to create songs that are heavy and reek of a putrid stench, while still conjuring pools of blackened empathy. All you have to do is blast their song “Mdłości II” to hear what I’m saying. I like to listen Our Place Of Worship Is Silence with my eyes closed and lose my mind in the sea of blackness, while their audio torment fills my mental void. This is music that needs to be felt and not only heard because this band creates from a place of honest passion and not from a place of trends. When blasting Disavowed, and Left Hopeless I have visions of war but I also know that I have the power to decapitate my PTSD. I want to salute Our Place Of Worship Is Silence on the musical tip but I also want them to know that they killed it on the lyrical and vocal delivery as well! As soon as I saw this promo land in our inbox I knew I wanted to premiere a song.