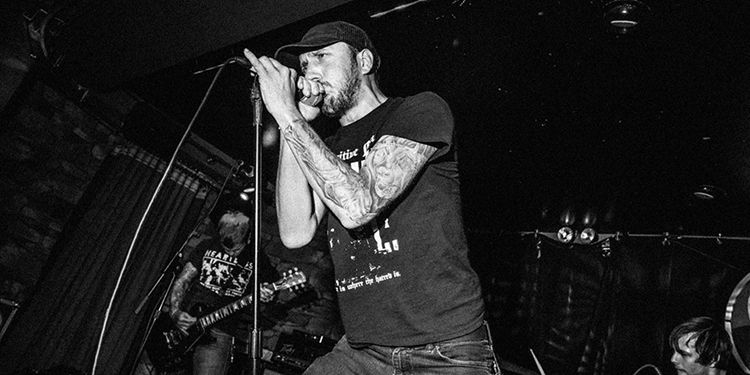 I grew up in the sparsely populated state, which has one of the highest suicide rates in the country. Many young creative people end up moving away, but the members of Reproacher — drummer Jarrett Janzen, vocalist Joel Funk, guitarist TJ Snook, and bassist Nate Fitzgerald — have chosen to endure Wyoming’s harshness, consistently releasing some of the nastiest metalcore in the country. Jarrett, Joel, and TJ sat down with me to discuss what it’s like to play music in such an unfriendly place. It seems like Wyoming is one of the least represented states in music — and culture in general. How would you describe it for someone who’s never been there?

Joel: It’s the least populated state in the nation, and you can tell that as soon as you arrive. Given a much smaller pool of people that are geographically isolated from metropolitan centers, it can make it hard for art, and especially alternative art, to make its way here or develop locally. But despite the challenges, there are pockets of people who are familiar with and appreciate alternative culture, and we’ve had some cool bands start here and a lot of great bands play here. That said, yeah you’re right. There’s not a lot going on.

Are you all from Wyoming originally? If not, what brought you there?

Jarrett: Half of us were born here and the other half elsewhere, but we’ve all been here most of our lives. I guess our parents can be blamed for various reasons. Like you mentioned, Wyoming has a small but dedicated underground music scene—and has had one for years. But hardly anyone knows about it. What were some Wyoming bands that motivated you to start playing music?

Joel: Most bands from Wyoming we listened to growing up aren’t around anymore, but I would say we all liked Deadspeak, Condemned Remains and Bernadette, and of course the bands we were in fucking ruled. In terms of now, I really enjoy Juice Falcon from Casper, Redbush from Laramie, Stoic from Laramie/Colorado Springs, Euth from Laramie, and Casket Huffer and PlagueHammer, who are both from Cheyenne.

TJ: Yeah I’d say the record store in Cheyenne, Ernie November, has always cultivated local bands and the scene here. But I know for most of us, the guys from Deadspeak and the local metal scene have always had a huge influence on the bands we ended up liking when we were older. There’s always been a pretty strong metal scene in Cheyenne since we were younger.

How have you kept that sense of motivation alive over the years?

Joel: I guess it’s just that we enjoy what we do. I’d like to use words like “yearning” and “wanderlust,” but it’s really not all that complicated. We all love this kind of music and we enjoy creating and performing it with one another. As long as that’s there, I think we’ll keep going. Can you describe the first punk or metal show you saw in Wyoming?

Joel: It was at the Knights of Pythias, in maybe 1998 or something. The first band was a death metal band from Laramie called Yog-Sothoth and I was standing in the middle of the crowd with my Metallica Black Album shirt I picked up at Wal-Mart on. As soon as the band started, I got fucking trampled by some mosh madness and was terrified. It was pretty cool.

TJ: I’m pretty sure my first metal show a couple of friends and I stumbled into when I was around 13. It might have been at some random hotel downtown. It was a pretty short-lived death metal band called In Death I Become and, like Joel’s experience, we pretty much got destroyed in a mosh pit with a bunch of sweaty older dudes. It was totally awesome.

Jarrett: My first punk show was in a tiny basement with the furnace in the middle of the room. I can only remember the band’s name as MS. But even with only like ten people in attendance, there was no room to get moshed. I guess that was a good experience.

Growing up in Wyoming, I always felt like musicians looked to the scenes in Denver and Salt Lake for inspiration. Has that been the case for Reproacher?

Joel: Denver was always the destination for shows for us, and we would never be who we are now without the help of our friends down there. Ethan from Clinging to the Trees of a Forest Fire, Primitive Man, and Vermin Womb was especially helpful and gracious in our formative years as a band. Denver’s scene is fucking killing it right now, with the aforementioned bands and a ton more. Salt Lake was a big deal for us too because of bands and friends there that were inspirations at first and now friends and inspirations. Andy from Boar’s Nest (studio) and the guys from ex-Gaza, now Cult Leader, were huge for us. But your sound also reflects Wyoming itself. On Nature’s Bastard, I was struck by the lyrics and music of “Sundown”—in particular how suicide comes up in the song. Can you talk a bit about that?

TJ: The culture here can sometimes be oppressive and really break some people down to their darker, more destructive tendencies. Drinking and forgetting about your circumstances are sometimes your only options in small towns and states such as ours.

Joel: Wyoming has one of the highest rates of suicides nationally, and without being specific, I’ve known a fair number of people who died by their own hands. I think it speaks to the isolation and the sense of feeling trapped that a lot of people fall into.

I’m really interested by what you mean when you say that Wyoming’s culture can be oppressive. Can you say more about that?

TJ: Well, there’s a pretty dominant culture, primarily consisting of good ol’ boy and mainstream traits that make most of the small pockets of alternative culture extremely isolated and marginalized. And if you’re a freak or different in any way then there’s no place for you in society. Like anywhere else where cultures like that intersect but even more extreme here, just because there are so few people, most likely. There’s a pretty strong right wing and homogenized feeling in Cheyenne, for the most part.

TJ: That’s in reference to the working class individual, who works hard but isn’t ultimately sure why. In the end there’s no celebration or reward for that struggle, but instead only the pressure to work more, forget more, and put any real formation of meaning or value in life aside. I’d say the ruling class are those who have forgotten them and encouraged them to engage in that meaninglessness. It’s the big business, the religious right, and the profiteers in that system who have forgotten them. But in spite of all that negativity, Reproacher refuses to quit. How do you reshape the negative aspects of your surroundings into something productive?

Joel: I think it’s about doing something we enjoy by making music, which hopefully speaks to people who need it. I know when I first found the music I identified with, it felt like it was manifesting the feelings I had, and I felt like I wasn’t alone. People identify with others who enjoy the same music and say the things they seem to think. That’s the positive thing we do I guess, is telling people who feel like we do, “We’re also pissed. You’re not alone.”

Do you have any advice for punk and metal musicians in rural areas?

Joel: Well, it’s definitely easier to reach out to communities outside one’s own these days, so I would say be thankful for how much you’ll save on postage and long distance phone calls for starters. But otherwise, I would say that it takes time, effort, shitty shows, shitty recordings, fights with band members, losing people, replacing people with better members and ones that aren’t total letdowns, and maybe if you just keep swallowing all that, you can have some experiences you’ll never forget and make it all worthwhile.

What do you guys do to help the scene in Wyoming?

Joel: Well, right now we’re split between two cities (Cheyenne and Laramie). In Cheyenne, we did book, promote, and play a lot of shows before we moved. In Laramie, we did the same. More recently, it’s become pretty difficult for us to book shows because our personal lives are quite different (jobs), but we still do some booking and promoting as we can. There are other great bands in Laramie like Euth and Stoic and others that pick up the slack, and in Cheyenne, there’s Ernie November that still does booking. We just played there with Fister on Friday and they totally fisted us all.

Advertisement. Scroll to continue reading.
In this article:reproacher