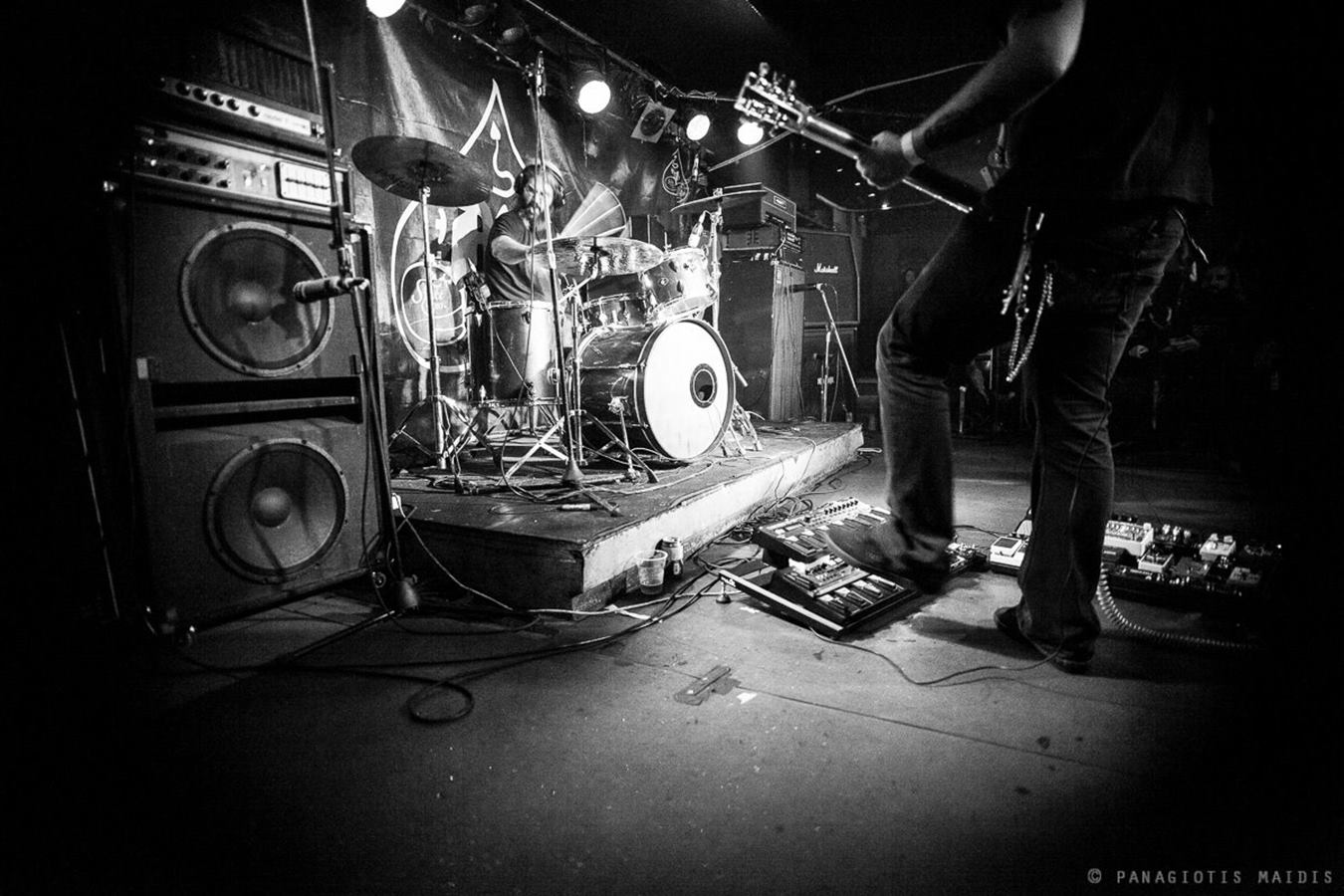 One of the most promising bands to come out of Greece in recent years is Omega Monolith. Having released Black Campaign, and their Vile EP, the band is evolving in the most intriguing of ways. A few weeks before they release their new album, Fungus, we discuss with the band their origin, the new record, their previous EP, as well as the challenges of being in a musical duo, the process surrounding their songwriting, and the mystical powers of guitar loops.

Hey guys! First of all thanks for finding the time to do this interview it is much appreciated. Would you like to give an introduction for anyone that does not know who and what Omega Monolith is? The name of the band is taken from the title of a Fleshpress song, if I am not mistaken.

Yes, that is correct! For those who know the song, there is nothing more to be said, and for those who don’t…well, make listening to it your No. 1 priority! Omega Monolith is a two-piece band that has been around since 2012. We (Takis/guitars and Alex/drums) formed Omega Monolith in order to explore and experiment with unconventional musical forms and sounds which would deepen and strengthen our musical expression.

Omega Monolith might be relatively new, but you guys have been in the Greek underground scene for quite some time now. What other bands have you participated in? Are there any other projects that you are involved with now?

Before Omega Monolith, we played together in a band called Tenderness Of Wolves. When that band came to an end, we decided to form Omega Monolith as a duo. We have played and are still playing with different bands and projects. One we both are participating in is MOGG – a collaboration of Omega Monolith with our brothers in Automaton. Your newest release is an EP entitled Vile. When you compare it to your previous release, Black Campaign, what can you tell us about the evolution of Omega Monolith?

For us Black Campaign was a very important release. It was the first time we could hear and understand better how the different elements we use in our music (loops, huge guitar sounds, repeating drum patterns etc), interact. We saw more clearly the potential in what we were doing. So, we took everything a step further. Vile is musically, technically and sonically, even visually, more in synch with what lies in our souls.

Omega Monolith comprises of just two band members, something unusual but not uncommon in extreme and experimental music scenes today. What do you think are the advantages and disadvantages of dealing with a smaller line-up, instead of a trio or a four-piece band?

Well, for sure a big disadvantage is that there are less people around to carry all the equipment!! On the other hand, it’s easier to make decisions with only two people in the band. To be honest though, the most important thing in a band, however big or small the line-up, is to be able to communicate and understand one another. Cliché, but true!

Since you are an instrumental band, you have to put more work into conveying your concepts to the listener without the aid of vocals. Is it something that you find hard to do? And what exactly are the themes that you are exploring in Vile?

Not at all. One of the main concepts of the band at the beginning was the lack of vocals. We had the need to create heavy music with many ominous atmospheres which would carry us (and the listener) far deep in ourselves and let our inner feelings express themselves without any interruption or guidance from any lyrics. We are not against the use of vocals, but we haven’t felt the need of using them yet. If that changes, we will do it. Vile, is a direct interpretation of how we feel about what is going on around us. Don’t forget it’s a very difficult time here in Greece, and we have a lot to be angry, pessimistic and hateful about. Can you tell us more about how the songwriting process works for Omega Monolith? Is it based on precision, or is it more like a jam session and wherever that may lead to?

More like a jam session that can very easily turn into precision practicing very fast! We always jam a bit for warm-up, even if we are working on a recording or a gig. This jam many times leads us to a great riff or a musical form that we both like. We stop everything and begin working on that – figuring out metronomes, loops etc. And that might take anywhere from some minutes to some months!!

You have quite a unique mentality in your use of guitar loops. How do you go about structuring them, and letting your music evolve in a sense through them? Is it a trial and error process where you pick the most suitable parts, or is it improvisation as well?

You can say that the loops are the third person in Omega Monolith. A person with at least four pairs of hands, really steady and synchronized and with a vast amount of patience! Since we discovered what we can do with loops (and still discovering new ways to use them), our music is orchestrated differently. Of course, as you said, there is a trial and error process and our secret is building the loops with different textures, complicated sounds and effects and the main focus is to complete a full spectrum of frequencies. Last but not least, we would like to mention that all loops are built “on the fly” and we don’t have any pre-recorded parts. Our process is the same either in the studio (we record live in the same room) or on the stage when we perform live or rehearse.

The sound of the album is great, managing to give a very heavy and dark quality to the music, but still deliver it with clarity and precision. Can you give us some information about the production of the album? Where was it recorded and did you use an engineer? Was it mixed and mastered at the same place you recorded or some other studio?

Thank you very much! Vile was recorded live in Illusions Recording Studio by Thanos Bikos. We mixed the album together with Thanos, and mastering on the first track,“Vile,” was done by James Plotkin and on the second, “Loophole,” by Thanos. I really like the cover artwork for Vile. I think it depicts quite nicely themes such as time (with the metronome) and death (with the skull.) Can you further explain the significance of the artwork in terms of your themes as a band? And also, who designed it?

Everything that has to do with our artwork-conception, design, lay out and so on-is the work of Viral Graphics (contact them HERE). We are very lucky and proud that these guys are so close to the band and our friends. We don’t need to explain anything or get into some process of trying to share our vision. These guys get it! And they are a source of inspiration to us because their ideas are also infinite! If someone hasn’t had the chance to check their work, they should do it…now!

Vile will be released by 3 Shades of Black. Can you describe your relationship with the guys running the label? How did you decide to release it through this particular record label?

One of the main reasons is that we knew these guys before they started 3 Shades of Black. We are friends and it is very easy to communicate. We share the same views in many issues, artistic or not. Another reason is that the label is here in Athens, Greece, which gives the opportunity for us and the label to solve any problems and reach decisions easily.

As far as I know, you will be releasing a full-length in 2016. Can you shed some light into what we might look forward to in your debut album? Is it going to be in the same vein as Vile, or are we to expect a few surprises? You guys are also actively performing live, and you had some great shows with bands such as Agnes Vein, Switchblade, Aluk Todolo and Goatsnake. Are there any future plans for gigs or even for a tour?

Yes! We perceive Omega Monolith as a live band. The essence of the music we create can be fully appreciated in our live performances. We want to play live as much as possible, and of course there are many plans. For starters, we are going to play in Patras on the 14th May along with Shattered Hope and Clamor of Existence. Then we are going north, in Thessaloniki and we are also going to play in Athens, probably at the end of May at the release of Fungus.. You can check our Facebook page for details, updates etc.

Black Campaign was released just cassette if I remember correctly. Can you tell us what format Vile and your upcoming full-length will be available on? Is there the possibility of Black Campaign seeing a re-release on a different format as well?

Well, Vile was released on CD and our full-length will be on vinyl. We do not have any plans right now of re-releasing Black Campaign, but we don’t think it is a bad idea. When the time comes we will consider it.

Alright guys! Thank you again very much for finding the time to answer my questions! All the best to you, and hopefully I will see you playing live soon!

Thank you! The past is now…

A few months back, Omega Monolith, the drone duo from Athens released their EP, Vile, establishing their ability to manipulate time and space, with... 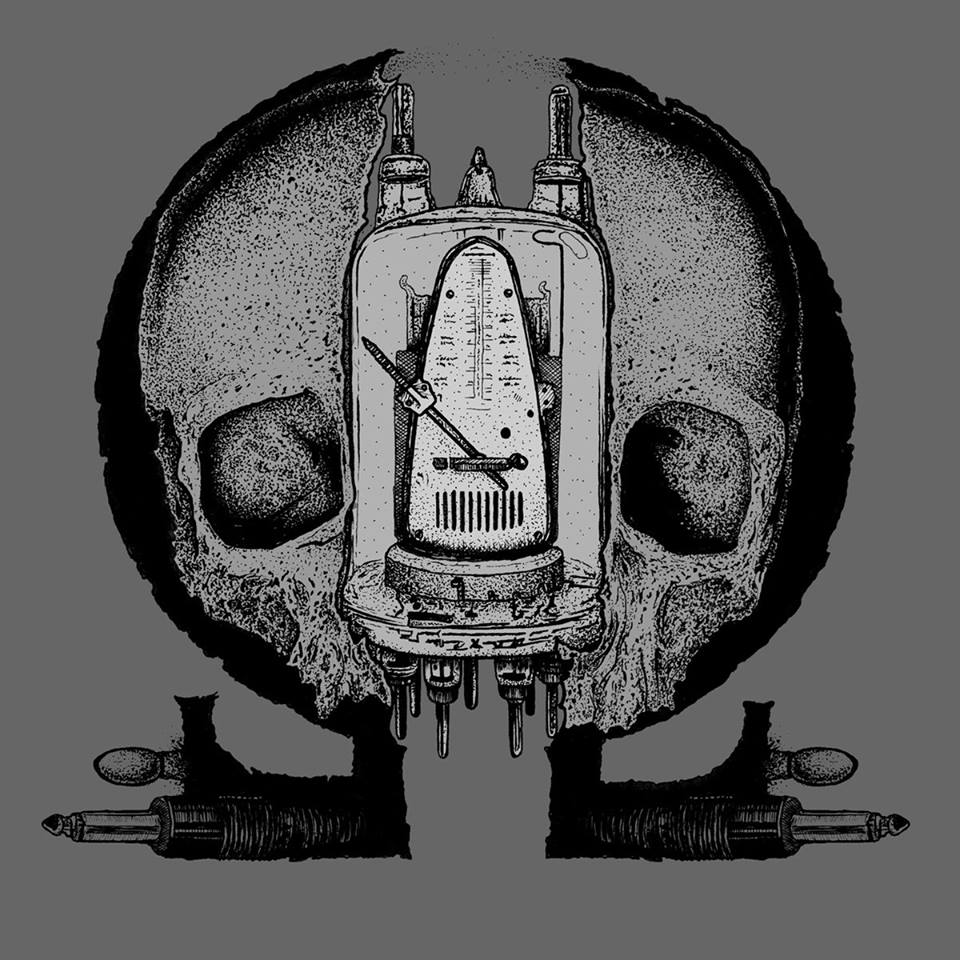 This Greek instrumental duo came into existence back in 2012, and even though their moment of inception does not seem to be that far...