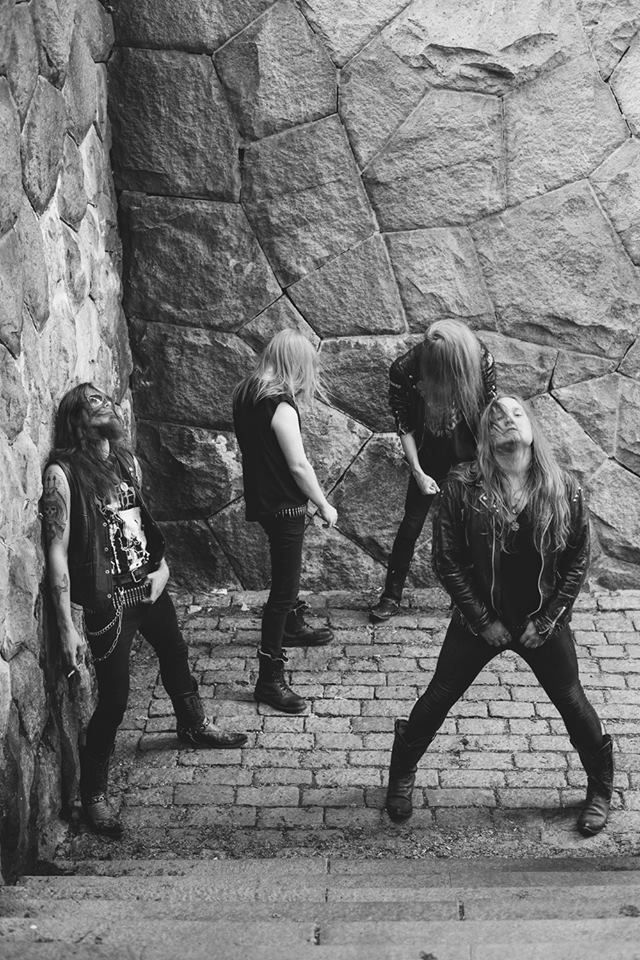 Hailz Obscure Burial! First off, I would like to thank you for doing this interview. Your four-song demo, Epiphany, is a Force-five tornado ripping through the underground. Please answer the following questions so Cvlt Nation fans can get to know the beast that is Obscure Burial:

It is not immediately discernible who the band’s influences are. Perhaps 80’s thrash-kings Kreator, or 90’s cvlt fixation Order From Chaos. Can you describe what inspired the destructive power that is Epiphany, and what bands helped shape your unique sound?

Many names from the original Death metal underground were influences, those of the most violent, malevolent and uinhuman… Bestial! And that’s the temper we looked for in Epiphany as well.

Tell us about the production used for the demo. It fits the music perfectly, sounding raw and unforgiving.

It was a recording-session in the early summer of 2014, in our rehearsal chamber. Everything was done live, except vocals were added later, so there was space for “mistakes” and dynamics too, of course. I think we are mainly a live band, so this way of recording two demos felt appropriate.

Who does the songwriting? Is it a collaborative effort? It sounds like the band loves to jam until good things develop. Tell us about your creative process.

Song and lyric writing is done by me and L.K.. In Epiphany it was done radically 50/50, two songs each. We don’t often just jam together or try to find the “common chord.” Riffs are mostly spawned in one man’s subconsciousness, then served to rest of the beasts. And we don’t rush with these things. The first song done for Epiphany was “Daemonic Incantation,” drowned in the depths before “God’s Abomination” even saw the nightlight, so it’s been a long process to complete the demo.

The band are fresh off the ‘An Ending In Fire’ event in Germany. Tell us what the experience was like. Are you planning to play in the United States soon?

Germany truly got its ending in fire. What an amazing night! That fire was fueled by six strong and pitch-black bands, intoxicated visions, blood and…good company. The U.S. of course needs a hell to open too. No plans or invites yet, but we are ready. I’m a fan of all your demos. Do you have plans of re-releasing the demos in a compilation?

Yes, we have been thinking about that too. But we’ve just gotten these two demos done and out. No need to add a compilation in our discography yet, since we are still a young band, gazing beyond the future. And you’ll see what the first full length shall include!

What inspired the band’s name? I’m quite curious about it. What is an obscure burial? Is it at all possible to perform it on bank executives, world leaders, and proponents of mainstream media?

We open the tombs for resurrecting Death, and fill the graves with all that we see as false, impure and fireless.

Tell us about what other music you listen to, if anything. What other interests help inspire your powerful music?

I still blow my mind almost daily with new black/death-metal bands that I have not heard before, and I think I’m quite a choosy when it comes to metal. There are too many types of music I listen to to list on here, but it is mostly mental and, in one way or another, fukk’d up. Black Sabbath and Rainbow can’t get too much praise though… Is a full-length album in the works? Who will release it?

Yeah. We are currently working on it and it will be our next release, through Invictus Productions.

What can rabid fans of your prior recordings expect from you guys on future releases?

What do you think of today’s musical climate? Pop dance music is dominating the radio as well as album sales. Albums are just promo material for live shows. There are hordes of bands. How difficult is it for trve fans to discover elite underground metal, in particular, yours?

It’s easier than ever to find new bands today, thanks to the internet. Who needs to find, needs to search, concerns every thing.