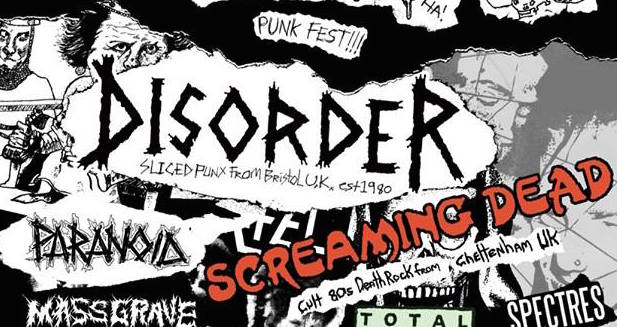 How much UNITY does the Vancouver Punk scene have? Loads – this is why from June 9th-12th, the HAVE A GOOD LAUGH FEST will be taking place in this awesome city! CVLT Nation would like to salute everyone who is making this a reality…the line up is beyond UNREAL – peep the interview I did with one of the organizers, Cordie of Thought Decay, and fest posters below if you do not believe me!

How did the HAGL collective come together?

HAGL : Last June (2015), I decided that I wanted to put on a punk fest in one year time, so I began looking for a headliner to entice other bands to come out and play. I eventually got ahold of Taf from Disorder and we agreed on a price and dates. At the time, I was working with Jesse and Eubey and after talking to them about the plan they decided that they wanted to help out and make it happen. A few months later, word got around that we were working on a fest, and I was contacted by Jakob and Anthony (Glam Racket) who wanted to help organize. Since then, it’s been the five of us putting together the fest, but we have also gotten a lot help from friends and people who want to volunteer.

Who handles all of the art for the HAGL Fest, because the posters look unreal….

The five main event flyers were drawn by Laura Bergen, the side shows and the Have A Good Laugh fest posters were done by myself.

The HAGL Fest is seriously well curated. What’s your process for choosing the bands that are going to perform?

We want to bring real punk to Vancouver, we do not want to focus on sub-genres. So we asked the bands that were not necessarily the most hyped up, but the ones that we thought were the best, and the punkest.

Since many of the HAGL crew are artists and/or musicians in their own rights, does this impact the experience you want to give the bands who are participating?

Very much so; after most of us having played many places, we know what is missing in the North American circuit. We hope to provide all the bands (and guests) attending the fest a very hospitable and fun time. Creating a community in punk is important, so we’re going to do our best to make sure all the bands are cozy and compensated.

Do you find it important to collaborate with local promoters and DIY spaces, and if so, why?

Yes, that is absolutely essential, we want to work with people not against them. We want to help them, and so far they have helped us.

Why do you think Vancouver needs events like the HAGL fest?

Because punk is the most important thing in the world, and Vancouver has not had a decent punk fest since Distort ended. This city has a pretty decent amount of punks, but we feel that there could always be more bands, venues, fests, shows etc. Hopefully by doing this, people might be inspired to do more punk stuff.

In an ideal world, where do you see the HAGL Fest in 5 years?

Every year we plan on making the fest bigger and better, hopefully by then we can afford to bring in more and more international headliners.

What is your number one motivation in putting on this fest?

Punk: it doesn’t happen unless YOU do it.

At the end of HAGL Fest, what feeling do you want those who attended to walk away with?

I want people to feel like they’ve lost their minds.

Are there plans for a second HAGL?

Advertisement. Scroll to continue reading.
In this article:have a good laugh, vaNCOUVER