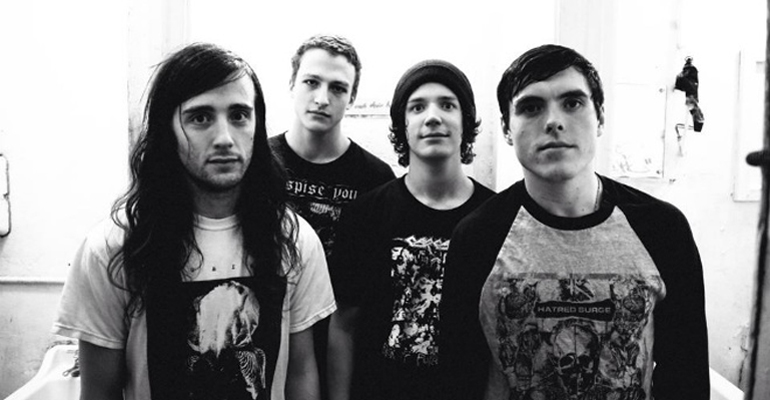 With a sound that mixes grind, sludge, hardcore and noise, Full of Hell is one of the best (and heaviest) new bands of the underground scene in the US.

This quartet from Maryland has an experimental vibe which translates itself into more noise quality amid their sound mass that evokes influences like His Hero is Gone, Integrity, Eyehategod and Insect Warfare, among others.

In this interview, guitarist Spencer Hazard, the only original member still in the band, talks about their upcoming album, a collaboration with Merzbow, how it was to meet Max Cavalera, and his all-time favorite record.

You’re going to play at the This is Hardcore festival again, with bands like Converge, Crowbar, Code Orange Kids, Dropdead, Nails and Bl’ast, among others. What are your expectations for this? And how it is to come back to the fest as a bigger and more well-known band?

I actually don’t have any expectations. If you do, you always get let down. I also think we are a lot harder to digest than the first time we played. So it should be interesting.

You’ve recently announced a new record that will be a collab with Merzbow, which makes a lot of sense, since you like to use some electronic elements in your live concerts. How did that happen? And what can we expect from this?

We met Masami’s live drummer, Balazs Pandi, a few years ago randomly in New York City. We kept in touch and he suggested we work on something with Merzbow, and that was beyond a dream come true. We wanted to make a Full of Hell record but have Merzbow’s noise instead of our own. We didn’t want to make just an electronic record, we wanted both of our own influences to shine through. Our material for this release had a lot more straight-forward grindcore/death metal influence than anything else we’ve released.

By the way, how was the writing/recording process for this record? Did you guys send some finished ideas/songs to Merzbow and then he just did his part? How did that work out?

This record was pretty stressful, because not only were we working with Merzbow, it’s being put out through a very prestigious record label, Profound Lore. Masami sent us over 45 minutes of noise almost a year ago, and he basically gave us full range to do whatever we wanted with it. I just kept in mind while writing where parts could naturally fit, because I just didn’t want it to seem like we just slapped random noise into our album, it had to flow smoothly.

Before this, you released a split with The Guilt of, a more noise/industrial project from Mike IX Williams, from EHG. What means to you to be able to work together with these names that are direct influences for you guys? And with who else would like to work with?

We’ve never actually met Mike from EHG. A389 set that up for us, and of course we couldn’t say no. Another big deal was the Psywarfare split, because Integrity is one of my favorite hardcore bands. We and Integrity toured together a few years ago, and I guess Dwid liked us, so he was into the idea of the split. I would love to eventually either collaborate with Prurient or Bastard Noise.

By the way, is this new record with Merzbow going to be a new full length or a EP?

The vinyl version will just be the collab LP of noise and music, but the CD version comes with a bonus CD of all manipulated Merzbow material. The bonus CD is very Tribes of Neurot/Wolf Eyes influenced.

You guys recently posted a picture with Max Cavalera. How did that happen? I’ve seen pictures of him with a Full of Hell patch. And are you a fan of old Sepultura stuff?

We found out that his son was a fan of ours, so we kept in touch with him. The last time we played Austria, Soulfly happened to be in the same town, so his son came to our show and brought us back to Max’s tour bus and it was surreal. I was always a fan of Chaos AD, but I never realized how thrash and death metal their older material was. I’m obsessed with Beneath the Remains and Schizophrenia now, though. Also, Nailbomb is awesome. When you started the band, you were all really young, right? Did that ever bring you guys any kind of trouble, with the band or in your life outside the band?

I’m the oldest in the band currently (25), but we started when I was 20. I’m currently the only member that has been on every release, but our drummer Dave did do our first tour with us when he was 14-15. He was almost kicked out of high school the first time we went to Europe because he was 16, but they never said anything else and he graduated no problem.

What do you think was the “turning point” for the band? Maybe the release of your first full-length or the splits you released after that in 2012? You have been getting more attention, especially on the last two years.

I think releasing “Roots of Earth” is really what made people pay attention. We did not expect the impact it would have on people. The Code Orange split also helped a lot, because it was released on a more high profile label at the time (Topshelf Records) and that expanded us into a completely different audience.

I’ve never seen you guys playing live, but your concerts seem to be really, really intense. Do you have some pre-concert rituals?

Our ritual is usually just me saying, “hey guys dont forget this part and don’t fuck up.” haha

How often do you guys rehearse? And do you all still live in the same city?

We try to practice at least once a week, but everyone is pretty busy with regular jobs when we aren’t on tour. Our vocalist, Dylan, has always lived a few hours away from us, but the instrument part of the band all live within ten minutes of each other.

And what bands do you consider to be Full of Hell’s “kindred spirits”? Maybe Code Orange Kids, Eyehategod?

That’s a good question; maybe a band like Column of Heaven, who we toured with recently and the band The Body. We all seem to write very miserable, pissed off experimental music.

I always ask this one. Please tell me three records that changed your life and why they did it.

My favorite record of all time is Pinkerton by Weezer. I think it has the heaviest guitar tone ever. Noise Grind Power Death by Insect Warfare is what made me want to have noise in my music. Primitive by the Endless Blockade is probably just my favorite hardcore record of all time though.

When did you start to play? And what were your influences back then?

I started playing when I was in middle school and it was just typical hardcore punk shit. Germs, Ramones, Misfits, Minor Threat etc. When we started FOH we had a different line-up and our core wanted slow, groove-oriented stuff like Crowbar, Eyehategod, but I wanted more fast elements, so I introduced a lot of Cursed, Infest, Converge influences. Like I said earlier, that Insect Warfare album is really what made me want to push our band as a whole. I think our influences now are more mixed though everything from Swans, Throbbing Gristle, Neurosis to GASP, Man is the bastard, Crytopsy, Discordance Axis.

I personally don’t download; I never really have. I prefer having an album, because with an iPod I’m too distracted and can’t really appreciate the music. I think the music industry would have suffered no matter what. It would be cool to actually make money doing what we love with extreme music, but whatever, times change.

Ok, this is the last one. How do you want to be remembered?

I want to know that my music impacted people, and when I’m dead, that people are still being changed by it. In this article:A389, A389 Recordings, A389 Records, crust, eyehategod, FOH, Full Of Hell, grind, hardcore, Merzbow, Noise, slider, Spencer Hazard, The Guilt Of...