How did your approach to Rain Songs differ from previous publications?

Every past project I’ve ever made started with a goal to work toward. Sometimes this was only a desired aesthetic or themes I’d aim to incorporate. Rain Songs differed mostly in this way, that I didn’t plan it out or even know what the individual pieces were while I made them. Instead, I was reading a lot, both poetry and prose, and having fun writing as much as I could. I made writing a priority over nearly everything. Another difference was that I was trying to write “naturally,” whatever that may mean, probably different things to different people. For me, it meant not thinking about who or what it was for, and trying to work out what I was thinking in the moment. Some of the pieces worked and some didn’t, but eventually I had what I felt like was enough to comprise a book, and I was happy with what I had. Did critically looking at various aspects of your life over the past year and writing about them affect how you interacted with these experiences or give you any new insights?

Yes, but only afterwards. Much like losing weight and seeing an old photo of yourself and realizing how much you had let yourself go before getting into shape. I wrote all these things nearly everyday, simply documenting thoughts and feelings that interested me, concepts, and dreams, but I didn’t really know why. I just wanted to write, to exercise that part of my brain, especially when I was stuck or in-between working on short stories, the same way I might sketch before drawing something polished. Then, cut forward to a year or more later, and the book is done and printed, and a lot of my life is majorly different now…my relationship, where I live, my diet, and daily routine. So all these menial thoughts and things I extracted from my life, now seem like snapshots of who I was at that time; and although I thought I was happy and doing pretty well, looking back I can see I was looking for escape, I was trying to find order and control where I had none, and I was avoiding changes I needed to make by writing about them instead of acting. It’s weird to look back and think about the day-to-day of the period. I guess that’s how life is for everyone though when or if you take a moment to stop and reflect. You had mentioned that often you’d write what would become the material for Rain Songs in between working on short stories. I’ve always considered poetry to be autobiographical or a glimpse into how one internalizes experiences while the short stories I have read by you tend to be fictional. Could you maybe discuss how you decide what scenarios or ideas you want to explore in the form of a poem versus a short story or how your approach to both differs?

Personally, poetry that is relatable has always resonated more with me than poetry with the primary function of demonstrating a mastery of words and technique. Therefore, when I write something I consider poetry, I’m mostly trying to find words and phrases that capture the sentiment I’m chasing, which is usually brief simple language. With fiction, there must be more of a conceit to the idea. As all writers do, I work some personal elements of my life and personality into my characters and the scenarios they inhabit, but I’m more concerned with representing them than I am with my own traits. So fiction takes me much longer, and I sit with the ideas for quite a while trying to decode what it means to my subconscious so I can fully explore the concept. In the poem Love you pay tribute to some of the great musical and literary icons which have influenced you. I was wondering if you could discuss some musical or literary influences you’ve consumed over the past year while working on Rain Songs?

With Love, I wanted to boil down some of my favorite things into one succinct poem, so while it could have went on and on, I certainly didn’t want to overdo it and lose the effect. Outside of those mainstays, I was listening to a lot of newer post-punk, country music, and various stuff like Nico, Cohen, Swans, and Townes Van Zandt. I was reading mostly southern literature, especially that from the 80’s and 90’s, like Larry Brown, Harry Crews, Tom Franklin, Chris Offutt, etc, but also these oddball stories and poems by Dennis Cooper, Richard Brautigan, Raymond Carver, Ottessa Moshfegh, Amelia Gray, Amy Gerstler, Lydia Davis…kind of sprawling I guess, but it all feels connected in a way.  What I’ve realized is that I enjoy stories of ordinary (often working class) people, but mostly the peculiar and uncomfortable situations they find themselves in. I also love stories about really bizarre, extreme situations and people. I think these writers exemplify both of those concepts. I’m interested in the way people attempt to connect with each other, usually fail to do so, and what happens when they realize that and stop trying. Connection can take on so many forms but at the core it’s all just sex and violence. There is a certain kinship between the seemingly bleak south of Larry Brown and Harry Crews and the midwest you portray in poems such as Braindead Midwest Memories. In both cases there is a dichotomy between the beauty and simple way of life and the harsh landscape and isolation it provides. There is a certain level of disdain towards people yet a need for connection which reduces people to those almost animalistic acts of sex and violence. I think these settings resonate because they seem to speak universal truths, everything is stripped away or slowed down and the beautiful brutality of the land and people feels like both the primitive beginning and hopeless end of time. Do you think that poetry is a way to connect with people on a more intimate level or do you think it serves to satiate that need for connection while remaining more isolated?

I think people read to feel a sense of closeness when they are experiencing a lack of connection in their lives otherwise, but also when they want it without having to put themselves out there by interacting with people in person. Reading allows remote access to the human experience of others. Coming across something that feels like your own thoughts can be self-affirming, or even revelatory at times, and that’s a powerful feeling. For me, writing is definitely more of an act of isolation, but putting work out into the world is a way can be a part of something bigger than my own life and sometimes meet and connect with others through it.

Could you tell us about the cover photo you chose for Rain Songs?

I knew I wanted the book to have a photograph on the cover, no drawings or graphic design as I’ve done with my previous zines/books. After thinking about the type of photography I prefer, I thought of Noah( aka Wulfticket)’s work. He’s someone I’ve met a couple times through mutual friends, and have communicated with through social media ever since. I sent him all the poems and he began shooting photos on black and white film right away. A month or so later he sent me 40 pictures, all of which were incredible. The one I ended up using was my favorite, and I love how anonymous it looks. Sort of nostalgic but also a little creepy in a way. I thought it was perfect. I know you were a bit concerned about your parents reading Family Funerals, what was their reaction to it?

I was really only worried about the “Family Funerals” piece since it portrays my father’s side of the family in a not-so-flattering way, but I don’t want to censor myself out of fear of what anyone might think of me, parents included. I also think the poem reflects on aspects of family that many people can relate to, especially here in the Bible Belt. Thankfully, my parents empathized with my viewpoint and there weren’t any hard feelings or weirdness. They also told me it sparked a conversation between them about the space and setting they want to provide for their own grandchildren, that they want their home to be a welcoming and inviting place for everyone to have fun within, which was really nice to hear.

Do you feel any connection between tattooing and writing?

If anything, through writing I can express thoughts and ideas in an exact way that visual art has never allowed me to do. After tattooing for almost 12 years now, I feel like I’ve removed my ego from my work as much as possible, it’s a service and a profession I enjoy, but it doesn’t challenge me the same way writing does. I also don’t admire or idolize visual artists nearly as much as I once did, yet writers continually captivate me. Reading challenges me and moves me unlike anything else. I think the publishing world seems distant or closed off and exclusionary to many people but there seems to be a shift towards small independent press. Could you talk about your experience navigating this world, creating Sistine Press and perhaps any other publishers or authors who inspire you within this context?

It probably seems closed off because most people only buy and read young adult genre fiction, so publishers can’t profit from the things that small presses publish. From a consumer perspective, I actually prefer this because I can faithfully follow small presses and trust the curation of their roster the same way I follow record labels. The biggest difference is that small presses are willing to take risks and print books they believe in instead of chasing profit or trends. Therefore, while it’s fun as a consumer, it must be grim to try and make a living as a writer. The “famous author” persona now seems to be a thing of the past (with the exception of J.K Rowling and Stephen King I suppose), which is a little sad but I guess that’s just life, things change.

I started Sistine Press in 2009 because I wanted to make zines and experiment with paper, packaging, and design, and I thought presenting them as releases from a small press would appear to give them more legitimacy. While that notion of legitimacy seems silly to me now, starting Sistine Press did give me the urge to sustain and foster that concept of a label, and kept me consistently working on projects for the first few years.

Heartworm Press and Calico Grounds were both inspirations for me when I started. Joshua from CG was actually a huge help when I was first getting things rolling, and we often traded releases which was amazing. Zach Hazard Vaupen, and the artist who creates under the title “Give Up,” were also really influential for me.

Thanks to anyone who supports small presses like Permanent Sleep and Sistine Press, who shares literature with others, and who encourages more people to read in a world with endless, meaningless distractions that do nothing to enrich your life or your mind. Buy books for your friends and your children. Keep investigating and exploring, challenge yourself. 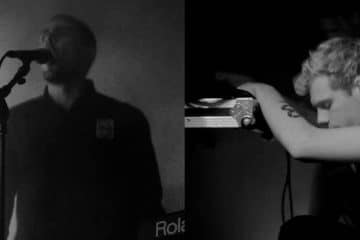