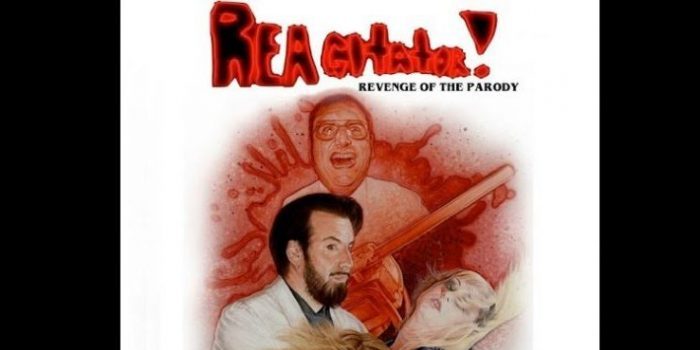 I recently had the rare privilege of both finally getting to see horror/comedy ReAgitator: Revenge of the Parody on the big screen and to meet director Dylan Mars Greenberg of Disck Pictures in person! It was truly the opportunity of a lifetime. This took place on November 17th at 5th Avenue Cinema on the PSU campus of Portland – a theater I highly recommend if you’re in the area and looking to see some rare movies you won’t be able to view anywhere else.

If I try to explain the plot directly, it’s not going to paint a proper picture. Dylan’s movies need to be experienced to understand her unique style (while this is my favorite Greenberg movie, I also suggest watching Dark Prism). At the very least, you should definitely check out her New Romantic synthpop hit “Dark Dancer” which is also featured in ReAgitator, not to mention was one of my favorite tracks of 2016:

Dylan spoke before the movie began and mentioned that this movie gets a lot of hate. I can see why it wouldn’t be everyone’s cup of tea, but she is a very bold person with extreme style. Art holds far more power when people either love it or hate it, as opposed to being universally enjoyed. Thing is, this is legitimately a good and hilarious film, and you don’t have to take my word for it. The audience enjoyed themselves just as much as I did, if not more so. Everyone in the theater was laughing and having a great time! While it wasn’t a packed theater, it felt good to see so many people getting together over some zany “wtf” Troma-esque humor. There were plenty of times a few of us absolutely lost our shit over certain scenes you couldn’t have seen coming.

I wouldn’t call this a straight-up horror comedy, however, because of the psychedelic artsiness that comes with the package that is Dylan Mars Greenberg. Similar to her other films, this one has a lot of music in it (she goes into detail about this in my last interview with her). Much of the songs featured in the film feel like music videos, especially in the latter half of the movie, and I just love that about her films. By the time the movie’s over, you feel like you just watched several because of the different moods you experience.

The acting in this was awesome too, especially from Voltaire, Lloyd Kaufman, and Dylan herself in a cameo. While Voltaire doesn’t get a ton of screen time, it’s thankfully not the type of thing where he’s only in one scene of the film. The guy really knows how to put on a performance!

My personal favorite part of the entire thing was the monster, which doesn’t show up until more than halfway through, but it’s so fucking rad! I love cheesy old school 1980s effects like this, but the monster has such a unique (and yes, phallic) style to it, it really comes across as iconic. In a way it reminds me of the also-phallic Aylmer from Brain Damage. It has character both aesthetically and even the odd way it wiggles.

Dylan took a Q&A session after the film where she discussed an upsetting difficulty that got in the way of filming on Day 1, tragically and understandably crushing her motivation. She also went into details about how the monster was created. Only fitting for the weekend of Trans Day of Remembrance, her answer to what it’s like being a trans filmmaker was infuriating. Opportunities that cis filmmakers would have no problem obtaining are often not granted to her, effectively making it more difficult to create these movies. In spite of all this, Dylan maintains a loyal, growing fanbase. ReAgitator is coming to VOD soon! Dylan is easy to get in touch with to direct music videos as well, so hit her up via her site if you’re in the Brooklyn area.