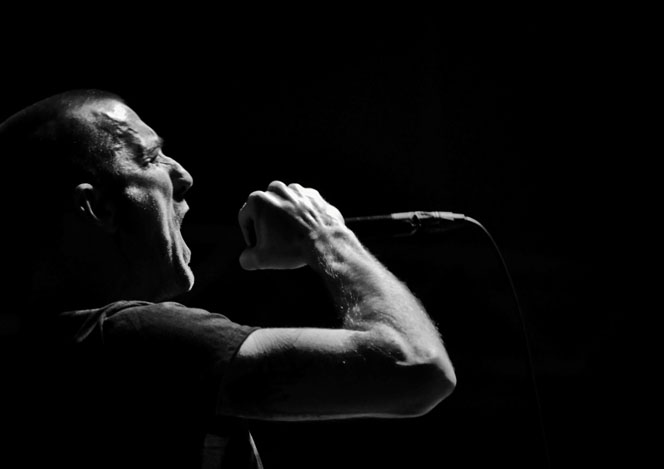 DAY THREE (Saturday) rolled in with a lamentable mistake owing to… not enough sleep, perhaps? The initial plan was to check Skepticism‘s entire set, but in the meantime, there has been so much praise about Yodok III that I decided to give them a look. When I saw Misþyrming’s vocalist and the rest of the band drenched in black coming onto the stage, I thought how curious it was that nobody told me that they are a part of this, but when the furious black metal barrage ensued, it finally dawned on me that I was not seeing the ‘correct’ band. Manically searching for the running order, I realized that I was in the wrong venue and just bearing witness to Naðra, first time out of Iceland, too. I stayed for half of their set in a steamy, clammy and packed Extase, making my way back for what’s left of Skepticism. Although a steady worshiper of funeral doom, seeing Naðra earlier did not entirely help in setting the mood for the special fan-picked setlist (‘Sign of a Storm’, ‘The March and the Stream’, ‘The Everdarkgreen’, ‘By Silent Wings’) these Finns were playing on the main stage, smartly dressed, white roses and ambience lightning abound.

An attempt to get back to Extase for Chaos Echoes proved to be a fool’s errand, as the place was already brimming 25 minutes before their stage time! Exchanging looks of exasperation with the surrounding peers, I concluded that this venue is best crossed off the list for the remainder of the day, a sentiment shared with the group of irritated Germans who aggressively barged out. If anything, the main stage was reassuringly the most accessible venue at all times, so next stop was the seasoned punk/metal collective Tau Cross. Seeing two of my personal heroes rocking it out in a new musical outfit was definitely one of my festival highlights. The final opportunity to see the artist in residence in action bound dozens in the direction of the Green Room for the showcase of their highly acclaimed debut Söngvar elds og óreiðu in full. The sincere and vehemently delivered set proved beyond any doubt that Misþyrming genuinely justified their spot in residency.

Back on the main stage, Converge were also playing their second set, the first being Jane Doe in its entirety on Thursday. Blood Moon was another one of those rare and emotional events, this time bringing together the likes of Steve von Till and Chelsea Wolfe. Across the hallway, a curious 7-piece featuring two vocalists (male/female) and a violin player were mid-way through their soundcheck. They turned out to be Dead To A Dying World, playing, what they call, ‘blackened apocalyptic doom.’ Not sure if it was the sound issues, vocals not being heard at most times or something entirely else, but a certain chemistry was missing from the performance and their message was not coming through. However, it was completely the opposite case for Amenra, who also had two sets in two consecutive days to play. Main stage was prepared for Afterlife, their entirely acoustic set, conveniently arranged with chairs in a circle, musicians intimately facing each other, bathed in dimmed inconspicuous lights. Theirs was an exhibit of perfect vulnerability wrapped in delicate tunes and wistful vocal arrangements. I noticed that a rendition of Tool’s ‘Parabol’ brought about many a teary eye. DAY FOUR (Sunday), the acclaimed ‘Afterburner,’ or the final day of the festival, seemed to have come all too soon. The venue number shrunk from five to three, giving way to a more relaxed musical itinerary for the visitor. Green Carnation had the honour of inaugurating the day on the main stage, bringing their classic album on its roughly 15 year anniversary to the restless Roadburn audience. Brilliant performance from start to finish. The Norwegians seemed to be having tremendous amounts of fun onstage, the energy being contagious and making up for one of the most memorable shows of the festival. Before another Amenra set, I took a quick peek into the Green Room where apparently a rather psychedelic freak out was taking place under a crazy light show. Vibrant colours, frenzied band and a dedicated sax player made me regret I haven’t showed up for Ecstatic Visions earlier. Onwards to the main stage, crowd was getting antsy in the anticipation of Amenra‘s electric set. What they let loose upon the world had my eyes wide open in true wonderment. The amount of rage, agony and torment was so dense and visceral that it seemed almost tangible. It soon became quite clear why the band has an almost religious following. Having my innards turned inside out, seeing ethereal Klone next door felt like walking on air. Previously unbeknownst to me, they were playing a rather atmospheric and proggy music, vocals somewhat reminding me of Gavin Rossdale and attesting to the fact that Roadburn is a bona fide fertile ground for new musical discoveries spanning across and through every conceivable musical genre. Neurosis were one of the heroes of this year’s edition, celebrating their 30th anniversary and having prepared two career-spanning sets, both delivered in the main venue jam-packed with the crazed spectators. Sunday set was another 2h long one consisting of some really old school tracks that will probably never be played again. It was a true honour being a part of something, well, one dares to say historical even! This would’ve been already enough to wrap up the fest in grand style, but I returned once more for the US sludge outfit Buried at Sea who were crushing the main stage and giving no quarter to those who had the stamina to hold their ground. And so, what a truly spectacular Roadburn this was! In the post-festival days, when inevitable reminiscing ensued, it became clear that every person had a completely different RB experience. It is entirely possible that one could not find two persons who have seen the exact same bands, and that incredible musical versatility is surely one of the things that makes this festival so vibrant, loved, exciting and unpredictable. There’s something in that relaxed and friendly atmosphere paired with amazing music, beautiful location, more amazing music and the kindest of people that would soften even the most hardened sceptics. So all I can do is to give my warmest recommendations to those of you who haven’t had the chance to attend this festival in the past. It’s a truly rewarding experience on so many different levels, but be warned, it’s also highly addictive.