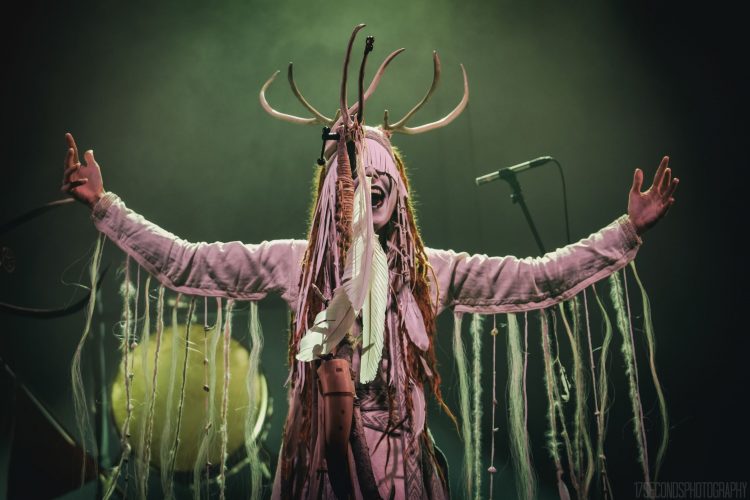 New year, new Roadburn! If you’re one of those few not suffering from the plague of the modern age (aka ‘attention deficit disorder’), you may have been skimming through my reports from the previous editions and/or attended the festival yourself. In that case I suppose you, just like most people, have been acquainted with Roadburn festival one way or another, so for once I’ll skip the lengthy introductions. You know the drill: four days + one curator + side programme + amazing crowd = a whole lot to experience. And not to forget, the whole of three specially commissioned pieces this time around.

For the first time ever, I’ve actually not jumped off the train straight into the venue. I was smart and got to town one day earlier and had the chance to: a) have a drink, b) leave the cameras in the room and c) enjoy the Roadburn Day Zero, or the Ignition. OK, I’ve arrived just in time for Hellripper and boy, did I wish they were playing one of the stages in the official repertoire! These Scottish lads gave everyone a proper lesson in old-school black/speed metal, the crowd was insane, people were stage diving, it was truly wild, and I hope they get the chance to do this again. Next time for even bigger audience.Hellripper

My Thursday kicked-off in a sort of mellow fashion. The choice was split between acoustic folky set of Myrkur and the wonder that is Thor & Friends. If there was anyone doubting Amalie Brun’s talent and musicianship, I’m pretty sure they were simply disarmed after this show. Folkesange was a musical journey through Northern Europe’s folk heritage during which Amalie effortlessly switched between various instruments (I saw piano, guitar, drum, hurdy gurdy), fine-tuning the approach depending on the songs delivered. She was accompanied by a number of musicians on stage, including the cellist Jo Quail, who was also to grace the stage on two more occasions. Once with MONO and with At The Gates. I first learned of Jo in 2014 when she was opening for Rosa†Crvx at The Garage in London. She was mesmerizing then and continues to be so. It’s great to see her getting exposed to the wider audiences through these unique collaborations.

At the same time, in the Green Room next door, the soothing and meditative sounds of xylophones and marimbas, smoothly delivered by Thor & Friends, held the wide-eyed spectators in a sweet trance.

Sadly, I had only little time to pop to the Main Stage for the first of the commissioned pieces. Former members of The Devil’s Blood reconnected on stage once again. Their ranks were strengthened with new blood which gave birth to an entity under the guise of Molasses. Hearing Farida sing again was a true thing of beauty: genuine, passionate and vulnerable at the same time. Here’s to hoping we haven’t heard the last of this ensemble.

Next stop: Het Patronaat, where I was to witness three consecutive shows of the day. Each one louder and crazier than the other. Even so, being in Patronaat had a bitter-sweet feel to it, considering my love-hate relationship with the venue and realizing that these were the last Roadburn shows here as the building was to be demolished, a part of the ongoing new development in the area.

Just a bit before 6pm, daylight still coming in through the stained-glass windows, Rakta were ready to blow our minds. You had an opportunity to read a lot about them here at Cvlt Nation, we were absolutely stoked to support them. It came as no surprise that the venue was packed and overcome with excitement. It was also quite impressive to see how big the Brazilian community attending Roadburn really was.

Hailing from the urban jungle of São Paulo and its rich local underground scene, the band has been compared to everything but is detached from genres, doing their own thing and having their unique sound which emulates the environment from which they came. Through ¾ of an hour one could experience how immersive their experimental noise really was, laden with screams and howls, sending shivers down the spine and making you tap your foot to the rhythm at the same time. In the opening address, the ladies also shared with us a lesson about being grateful for what we have.

Danish blackened heavy metal outfit Slægt were one of the bands invited to play at The Burning Darkness, an event curated by Roadburn’s 2019 curator – Thomas Lindberg. Suffice to say, he had his finger on the pulse cos these guys ripped the place up. Some more stage diving, moshing and headbanging, you could not stop to have a breather. Probably one of the best Roadburn acts I have ever seen.

Another Brazilian band was setting up and getting ready to do our heads in, Rakta’s mates Deafkids. There’s something truly hypnotical about cacophony of violent experimental noise mixed with South American rhythms. If you heard Deafkids before, then you know how strongly percussion and beat based their music is but experiencing all that in a live setting is on a whole another level. My ear drums are still thumping.

Attempting to see Heilung after this was probably a huge mistake on my part. Seeing anything after Deafkids is just an exercise in futility. However, I did make my way towards the main venue and was met with an almost gimmicky display of costumes (garbs?), assorted antlers and animal furs, and a lot of throat singing and repetitive “shamanic” drum beating, you know, the whole nine yards. Maybe I wasn’t in the right frame of mind, maybe I didn’t ‘get it’, but after a while it became simply unbearable. They do get cookie points for spreading the message of peace and brotherhood.

The final show of the night for me was another curator’s pick – the tremendous post-rock institution MONO, celebrating their 20th anniversary as a band and the 10th anniversary of Hymn to the Immortal Wind which they performed in full, accompanied by Jo Quail Quartet. As with all things MONO, it was intense, crushingly melancholic and beautiful.A perfect and fitting end of the first festival day. There’s more to come!