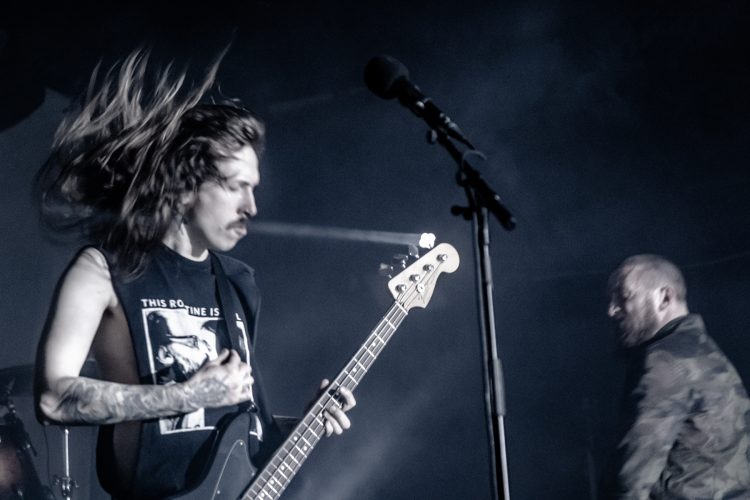 Local Londoners ELEPHANT TREE are on bright and early in the Electric Ballroom and it’s a frustrated dash from the tube station through a very packed Camden High Street to catch the last couple of songs. It’s worth the rush, The Electric Ballroom is already packed with a lot of enthused if bedraggled Desertfestians. Elephant Tree are on top form making jokes to the audience and clearly stoked to be there. Bassist Peter Holland belts out stunning vocals sometimes beautifully harmonising with guitarist Jack Townley against booming, fuzzy riffs and intricate soaring solos. The head bobbing audience and a certain reviewer heartily sing along to the catchy lyrics of ‘Echoes’, with its groovy powerful bassline and jazzy drums. The much doomier low tone of the ethereal and cymbal heavy ‘Surma’, making for a truly uplifting start to the day.

If Elephant Tree were uplifting then Brighton’s KALLOUSED bring about an instant crashing down to the brutality of reality. They obliterate The Underworld with downright miserable and visceral as fuck blackened sludgy doom with a crusty edge. The anguish emanating from vocalist Les Makepeace is truly chilling as he screams about the fucked-up state this world has descended into. Storming up and down the floor in front of the stage like an enraged bull backed up by thunderous drumming, ferocious bass and menacing guitar riffs which all maintain a great deal of variety and complexity. It’s fucking wonderfully hideous and the crowd (plus yours truly) leaves shell-shocked but seriously impressed.

There is no time to recover from this brutal assault before realising DVNE are up next so its back into the carnage that is the tourists of Camden to witness the epic journey that DVNE have become known for. They do not disappoint; the set builds and flows from the celestial to downright hellish with the same precision and variety as INTER ARMA. Blending gorgeous psychedelic vocals and riffs with sudden crushing blackened shreds and hideous growls. The soaring vocals pitched against the guttural growls are extra effective and combined with a brilliant light show they make for a truly invigorating experience.

HEADLESS KROSS are the first great discovery of the day, in the vein of EYEHATEGOD but with an angry Glaswegian twist these guys treat the Underworld to a gnarly Glaswegian kiss. Mixing a bleak brew of sludgy, doomy, psychy grooves with a smidgen of punk. The raw bellows are tortured and the riffs and drums relentless, just how it should be.

Ukrainians STONED JESUS have rightfully earned the reputation of key players in the stoner rock scene from constant touring over their nine years of existence, drawing a decent crowd who go wild for their catchy, groovy but satisfyingly heavy bass driven riffage. Vocalist Igor Sidorenko is clearly ecstatic to be here and belts out to the finish with the super fun and catchy ‘Here Come The Robots’, which gets the whole room dancing and moshing.

German trio KADAVAR are probably the most unbridled energetic act of the day. Drummer Christoph “Tiger” Bartelt is placed right at the centre-front and is an absolute machine with hair all over the place (thanks to a well-placed fan) mercilessly pummelling his skins like a rabid dog. Vocalist and guitarist Christoph “Wolf” Lindemann  and bassist Simon “Dragon” Bouteloup are both on top form as well and dish out groovy psychedelic blues with a heavy ’70s vibe. picking up to a galloping pace at times and crashing back down to sludgy doom but with an overall upbeat fun feel through which really gets the crowd dancing.

There is a thick air of fervent anticipation in the Electric Ballroom, especially considering it’s AMENRA’S 20th Anniversary and also for those who were lucky to bear witness to their simply perfect stripped-down acoustic set on Thursday night. Gently opening with ‘Boden’, the formidable sound of chiming bells and subtly ascending layered guitar harmonies form before punishing drums from Bjorn J.Lebon kick in and finally the harrowing tortured howls of Colin H. Van Eeckhout. All the performers thrash their heads to the powerful reverberating beat like a monstrous machine and the frenzied strobes and rapidly changing and flickering visuals add to the perfect sonic and visual assault. ‘Boden’ climbs to a dramatic peak and the heady scent of incense wafts from the effectively monochrome lit stage to add to the atmosphere. Having seen them several times before, expectations that were already high are, quite frankly, blown out of the water. A highlight of the set is the rare performance of the simply stunning ‘A Solitary Reign’; the intro is so delicate one could hear a pin drop and the audience are refreshingly respectful of that. The emotion emanating from Van Eeckhout is contagious and enough to raise all the hairs on the back of several necks. His powerful and heart wrenching performance of violently but elegantly contorting his body to sway, dip and dive with a hypnotic but aggressively graceful and forceful demeanour is what he is known for as well spending most of the time facing the back of the stage so the stunning visuals play across his back and striking large back tattoo of the gallows. This pose makes the performance much more intense and the rare moments that he does turn to face the crowd potently poignant. Tonight, has been a truly visceral but cleansing spiritual experience worshipping at the Church of Ra.

The final band of the day WRONG are set up a very intimate stage in The humbly sized Devonshire Arms and the room itself is packed to the rafters so it’s an extremely tight squeeze to get a good spot to watch them destroy said venue with their vigorous bludgeoning drums and riffs. Featuring members of TORCHE, ex KYLESA and ex CAPSULE, they expertly mix disharmonious sludgy and moody tones with satisfying grungy melodies, funky bass hooks and raw vocals. The set gets heavier and more raucous throughout making for the perfect afterparty finale with the moshing crowd-surfing audience tearing the Dev a new one.

Due to it being Amenra’s 20th Anniversary they’ve got another surprise up their sleeves, proabably what no one was expecting, a dj set of pure cheese including such wonders as SPICE GIRLS (never thought that would be included in a review) GINA G  and many other ninetie’s dance classics,it’s a hard to remember who  the guilty member responsible for this sacrilege is but there is not a guitar twang to be heard. However, after a day chock full of riffs its super fucking fun to party the rest of the night away with pole dancing members of a notoriously devastating band. Well done once again Amenra, well done.