Aptly named MONOLITHIAN (UK) are a dynamic blackened doom duo belting out massive sounds to an enraptured audience packed into The Dev. The sheer amount of energy and passion discharged despite the sauna like heat of the small pub is like a smack in the face. Drummer Shannon pounds the skins with a feral ferocity and occasional banshee shrieks while vocalist and bassist Simons caveman like roars and rumbling bassline are impressively tight and precise. There is a progressive ebb and flow that they follow as the tempo starts off at a crawl and speeds up to blackened/crusty gallop matched with the immensity of the vast sound blasting forth. For just a drummer and bassist these guys are a force to be reckoned with, be sure to check them out.

Back at the ‘Old Empire’ stage AKERCOCKE (UK) are another less expected band with their proggy black metal but they nail it with an impressive tightness, great stage presence and perfect sound .

Japan’s gruesome foursome CHURCH OF MISERY have the Old Empire stage almost bursting at the seams. Inspired by famed serial killers they create an earth shattering sound just as gruesome with flares for days and grooves abound over a punishing sludgy as f*ck bassline from Tatsu Mikami, the only constant member of the ever changing line up who wields his floor scraping super low slung bass with ease and combined with his penchant for huge flares and tight t-shirts it is a beautiful sight for tired, bleary hungover eyes. Vocalist of the last two years Hiroyuki Takano’s enthusiasm is boundless as he parades around the stage like a man possessed, riling up the audience with his horned beast impressions and theatrical gestures. They open with ‘El Padrino’ which has gets the crowd pumped fists throwing horns jumping grooving to the seriously disgustingly heavy grooves. Further highlights include ‘Born to Raise Hell’, ‘I, Motherfucker (Ted Bundy)’bass-lines which are heavy as hell with Takano’s raspy growls and spiked with groovalicious riffs. With a slow doomy/blusey build up to a steady gallop with crashing drums much louder and heavy than on record ‘Murderfreak Blues’ ( Tommy Lynn Sells) rounds off the set nicely

Hailing from the swamps of North Carolina WEEDEATER bring some southern fried sludge to the ‘Old Empire’ stage. ‘Dixie’ Dave Collins comical hill billy spirit summoning, leg kicking, face pulling head wiggling, bourbon swilling antics are hilarious but the band are seriously outstanding. Opening with God Luck and Good Speed it’s a great slow, heavy start but with Wizard Fight Collins is like a possessed rabid dog bobbing around all over the place, snarling into the microphone and thrashing out bass-lines just as grizzly. This and For Evans sake pick up the pace and it’s faster and louder than on record and the crowd go nuts fist pumping, crowd surfing and thrashing bodies . The interaction between Collins and powerhouse drummer Travis Owen is awesome, its like they are almost trying to out do each others manic level of performance and honestly it’s a heartwarming sight

Drum stick twirling stick trickster Owen makes it look easy, with a constant mad grin, hair flying from his relentless head banging all while tirelessly smashing the everlasting f*ck out of his cymbal heavy drum kit with a mind-blowing fervent zealousness. HIs enthusiasm and general insanity easily matches Dave’s so perhaps explains the calm serenity (in comparison) of guitarist Dave (Shep) Shepherd who coolly plays his killer fuzzy riffs to complete the unholy trinity. Collins leans over and plays his bass towards the crowd to rile them up in further and at the end his southern twang is unmistakeable as he exclaims “We appreciate y’all!” And we appreciate y’all Dixie. We appreciate y’all. Weed Monkey is the last song and the slow build up to the crashing finale is monumental. Can’t wait to see these guys again…. tomorrow!!

It seems HIGH ON FIRE have a pretty tough act to follow but they accept the challenge as the closers to an epic day of heavy as hell music and by the gods manage to conquer it by blowing the roof of The Electric ballroom with bone shattering riffs, skull crushing, thundering drums and bellowing vocals from the shirtless Matt Pikes, and, yes, for those wanting to know, he was greee-he-heeeeaaaasy! Sons of Thunder is the first track and has new and old fans alike thrashing around with wild abandon as they are propelled into a black hole. A slow build up to a crescendo of ridiculously pummelling drums, blistering guitar riffs and rupturing bass makes the suspense almost too much to bear but when they launch into The Black Plot and Pikes piercing shrieks finally kick in it’s a rewarding wait. From the get go it’s another relentless trip of galloping riffs, like riding into a cosmic battle or the implosion of a star. The audience have absolutely lost the plot, an ecstatic, sweaty, grinning miasma of constant flung fists, crowdsurfing, head-banging and windmilling.

Despite a slight technical difficulty Pike keeps the pace going like the true rock n roll hero he is and not once does the merciless ear punishment diminish. The unmistakeable first few riffs of ‘Snakes for The Divine’ is the closer of the epic set and the crowd summon their last ounces of strength to go bat shit crazy one last time. HIGH ON FIRE are so on fire and It is a perfect end to another insane day.

Reading on the edge: "Straight-Edge: A Clear-Headed Hardcore Punk History", by Tony Rettman 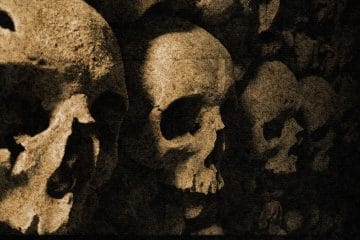 Experience the sonic beatdown that is CONSTRICT “Bleed for Me”