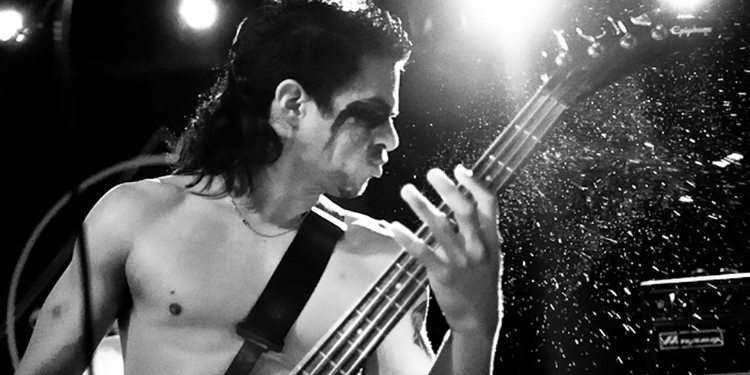 We began in the city, grumpy and overwhelmed with bodies, fighting off sense memories to hoist the flag high and march alongside the millions in righteous (if disproportionately white) solidarity. I ended in Brooklyn, wondering what the fuck the axe was doing on stage, how the fuck Bender could not know he was dressed like Judd Nelson, how the fuck a dwarf and his blonde could vanish in a sea of leather worship, how the fuck I could get my hands on a letterman jacket that read “Good Pussy Inspired Me” and how the fuck I can be friends with someone who doesn’t know and adulate Kay Parker.

“We used to have a machete but somebody stole it,” said Lucid Terror, holding the axe. “No shit!” I laughed loudly. He smiled pleasantly. I think I mentioned Chekhov’s gun and I think he got a real kick out of that but I may be remembering that the way I remember Prince guitar solos.

Axe notwithstanding, this band was pretty goddamn bludgeoningly decent. I know that’s not the highest of praises for some local boys making good on the death/grind promise but the last time I saw them it was in the thick wet hell of a Brooklyn summer in a black-boxed shitkicker just shy of a screaming singles scene so – as opposed to so many screaming horrors I find myself adoring from the ground up – Lucid Terror had to work it’s way to my favor through thick smear of metropolitan grump. Sometimes, I really wish I could reach back in time and smack the shit out of 13 (to 23, really) me for giving up on metal (and giving away so many choice Maiden imports) for Liz Phair and Pavement and all the soft glove feelings shit that helped shape my more formative yang. Not that I’m entirely unhappy with who I am. It’s just that I understand now more than ever that, had I kept on the path of amplified youth, I would have some totally killer fucking t-shirts and way more sigil tats.

Such is life, I suppose but I’m glad I get to see bands like Genocide Pact because their raging stack and growl thrash helps me reconcile what a fool I was for forgoing Morbid Angel, Carcass, Pungent Stench, Malevolent Creation, etc. ad infinitum in favor of overwrought, out-of-tune chatter.

That’s not to say I’ve suddenly chosen death but that death finally sounds like a viable option and that’s comforting as fuck. Come on, man. Caveman Cult? Fuck. I shared Savage War Is Destiny with a friend the other day and the closest I could come to a literate introduction was “AHAHAHAHAAFAAWWWKK!!!” because that shit is just fucking ridiculous and I mean that in the best possible way. That record is loud and brutish and fuming and foaming and frenzied as a ratking rabies deep in the neck of a drunk and aged chaplain, quivering midnight’s empty prayer and when it’s apocalyptic din is translated to the stage, the noisome rage becomes positively transcendent. Uplifting. Joyous. Fun.

Caveman Cult has tapped so deep into the primordial recesses with their meat-grinding set of war cries that they’ve actually turned the nightmares of errant humanity into a total somatic delight.

“You bang your head long enough, you’re bound to set your mind right.”