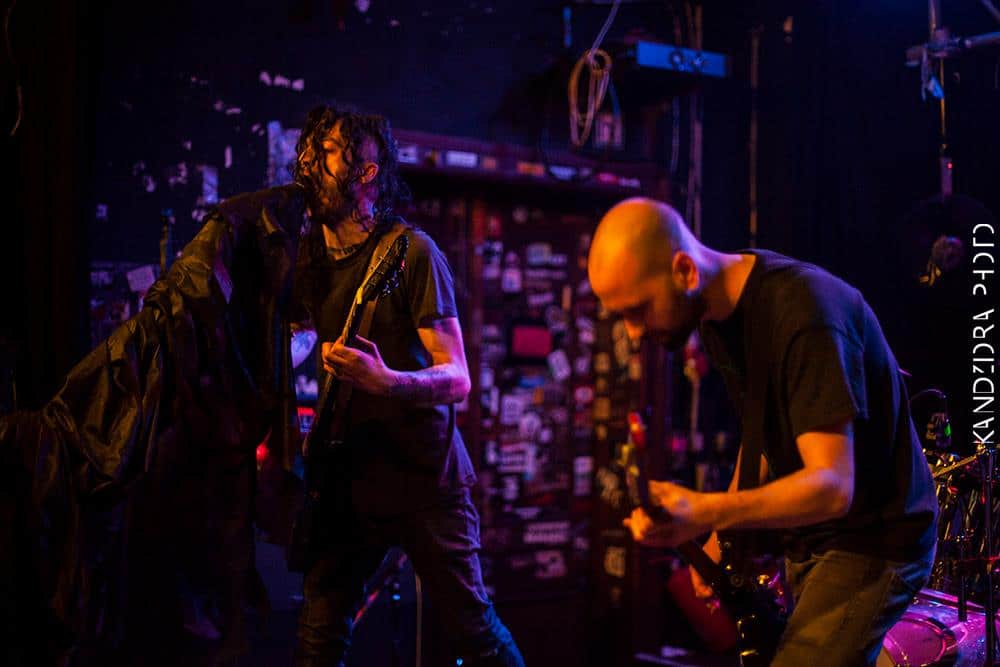 It’s not every day that you encounter a bewitching psychedelic spirit nestling within the deep harsh underbelly of crushing doom. Lares have successfully made a marriage of this with their commanding new album Towards Nothingness.

The German quartet made a favourable impression on many with their debut album Mask of Discomfort (2017), their subsequent stage shows enhancing their reputation as the full studio and stage package. As their reputation grew Argonaut Records stepped forward and so with pen put to paper, the Berlin quartet are now set to release this sophomore album on their new label.

Three of the eight tracks hover at around the two-minute mark, so while doom is the natural audio amphitheater for Lares’ brooding compositions, they are happy to mix and match and don’t feel the need for every track to stay longer than an uninvited relative.

Opening spiraling sermon ‘It Burns’ is something of an haluciogenic opener, all whirling sonic spirals, esoterically floating like clouds above rustling spoken prose. While a darker change of direction, complete with cold harsh vocals adds a more sinister shape, the ethereal edge continues to flaunt with us in the background, only inside the final stages does the whole thing descend into a shuddering slam of repetitive riffage, reminiscent of those irascible Liverpool heavyweights Conan.

The album features two fleeting instrumentals, the first being the abstract ‘Theiaphobic Ansia’ in which an imposing stillness settles across the top before, for the first time on the record, the tempo suddenly becomes more gushing as ‘Cursed With Embodiment,’ opens with a chattering charge, uneven grooves rushing in from all angles, simultaneously disorientating and devouring. A calmer thread breaks the various components down into a briefly more discernible shape but the final minute sees things stir once more, a whirlwind of guitars fighting for supremacy.

If at times the occasional lighter touches offer glimpses of 70s legends Hawkwind, Lares add further to the whole spectral celebration with the cosmically crowned ‘SN1987A Space Alteration Machine’. At almost 10 minutes in duration this is by some margin the lengthiest piece on the album, and arguably its highlight. The extended intro has a film score feel, broad and bold strokes sweeping back and forth before the deathly vocals help transform the saturnian slab of sweeping doom into a violent vista of ever undulating riffage and pulsating percussion.

The shuddering intensity and complexity of ‘Grey Haze’ is followed by the brief passing of ‘Oumuamua,’ the thread of which actually carries shades of Batushka at their most somnambulant. The galactic spheres surface again on the shimmering ‘Catacomb Eyes,’ another unworldly step into a seemingly transient territory through which Lares help stir with ever sharpening licks that roll mercilessly across the surface, showing little consideration for anything in their path.

The astral atmospherics, reflected also by the enticing cover art, features throughout Towards Nothingness, the closing title track providing something of a rocky landing after a restless and unnerving ride.

There’s something magical about escaping into your inner universe and realizing that you’re one bundle of cells existing in and amongst other bundles of...