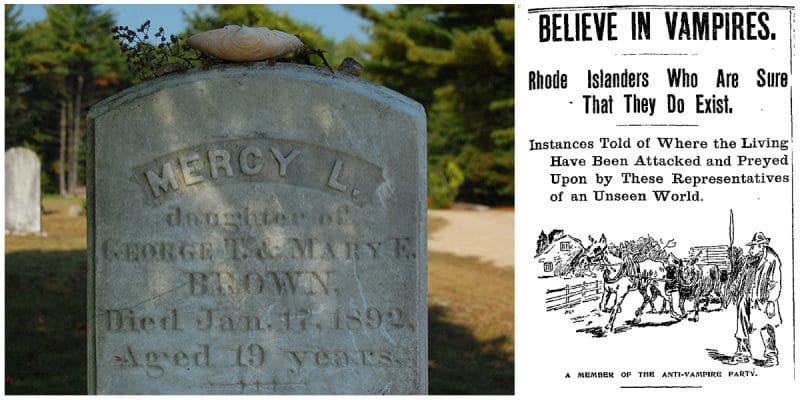 George Brown and his family, wife Mary Eliza, daughters Mary Olive and Mercy Brown, and son Edwin Brown, moved to Exeter, Rhode Island in the late 1800’s. During this time, Exeter was not much more than a farming town filled with simple and superstitious people. Between the civil war taking away her people, to plagues hitting the area mercilessly, and while the colloquial term for the disease was “consumption,” the more recognizable name for it was tuberculosis, a disease in which bacteria affects the lungs and can be spread by coughing, breathing, and talking. Nothing was known about this disease during the time, and where knowledge lacks, superstition fills. Consumption had driven the people to hysteria, believing the disease was the work of vampiric forces. Rituals were put in place to ward off the fiends, some as simple as garlic near doorways, to the more extreme and grotesque. George Brown’s family was no exception to the plague. Mary Olive and Mary Eliza died in 1888 within a few months of each other. The thief had stolen them away from him, and its long, slender fingers were reaching for his remaining two children.

Edwin, George’s son was very ill at this point as well. A large and hulking man now withering away, suffered the classic signs of consumption: coughing up blood, fever, and the chilling emaciation. Though our natural reaction is to look at this event through a presentists perspective, taking a step back and looking at this phenomena through ignorant eyes, it is easy to see how this could be construed as vampirism. Edwin picked up and decided to leave Rhode Island for Colorado to seek out the natural healing powers of the springs and the milder weather. In this, he hoped to combat the consumption and return to Rhode Island. Edwin’s exodus would come to an end ten years later. In the winter of 1892, consumptions cold hands finally took hold of Mercy, and carried her into the unknown darkness of the afterlife. Her health declined slowly, but quietly, as she did not show any symptoms of the consumption until she was on her death bed.

The majority of the Brown clan had been consumed, and the rural neighbors were fearing for their own lives. Rumors circulated, as they tend to do in a small town. Compiled with the hysteria and outbreak of consumption, these villagers were desperate to eradicate the disease. Some of the braver men approached George and suggested that his family was being covered under the dark wings of the diabolical, and Edwin was having his life force drained by vampires. The townsfolk suggested that, in order to save Edwin, they must find out which family member was the culprit, remove her heart and liver, burn it, and feed it to Edwin. George, knowing nothing else about the disease and desperate for the well-being of his son, agrees to let the townsfolk dig up the bodies of his loved ones.

On the morning of March 17, 1892, a group of men and the local doctor dug up the bodies. George couldn’t bear attending, and was missing from the exhumation. A decade of decay had taken its toll on both Mary Eliza and Mary Olive, and were little more than bones. Mercy Brown had only been dead a few months in the frigid northeastern winter, allowing her body to be almost perfectly preserved. This only served as fuel to the hysteria, as the townsfolk were convinced that Mercy was indeed the thief in the night. Her body was taken from its final resting place, and her perfectly preserved body was gently carved open. Her ribcage broken, the heart and liver removed, and finally, set ablaze. The fire made quick work of these organs, and the ashes were collected. Combined with water, they gave Edwin the concoction to drink as a last-ditch effort to save him. The concoction proved useless, and Edwin spent his last few months suffering from consumption until he died.

If you ever find yourself in Rhode Island, you can visit Mercy Brown’s grave, as she still receives visitors who pay her their respects, leaving offerings for her. Vampires of today rarely inspire the fear that they did in olden times, but in the middle of the cemetery where she was buried, despite all grounding in reality, it is hard to not feel the eyes of unseen specters, waiting for the opportunity to whisk you away into the night.