Full Of Hell is one of the most innovative and ever-changing artists in the heavy music scene, going from harsh noise to blistering hardcore to grind to nothing but walls of sound and into various other territories that many are afraid to go to. I was happy to talk to them about their work, tour in Europe, and their recently-released collaboration with The Body! Okay, I’m just going to dive in and we’re gonna start with the The Body collaboration because there’s so much I need to know about this. This was your first collaborative effort where you had two artists together in one space to work and record an album from the ground up rather than just exchanging e-mails like you had done previously with Merzbow, correct? Did this level of interaction make a new experience for your mindset and process when recording? Did it add a newer level of personal mystery to the final product?

Yes, that’s correct. It was a completely different experience, not only because of the direct contact of being in the same room, but also because the body works in such a unique way. Honestly, they aren’t a whole lot different than Merzbow. All 3 of these artists value the concept of improvisation. The body fully believes in going into the studio organically blind and just taking a stab at it, and it works for them! The mysteries kind of evaporated for me as soon as we got into the studio. I had so many small things that I hoped to see happen, but I couldn’t really envision what they would sound like in a literal sense. At the end it was everything I’d wanted it to be.

You and The Body tend to be fast and hard workers, how long did you actually spend in the studio working and recording together?

We booked 5 days, I think. However, we weren’t always working and the final 2 days were spent doing final edits and mixing, so it really didn’t take long. I think we both like to track quickly, and we have a lot of good energy between us that helps keep things interesting while we’re working.

Full Of Hell has been present on a myriad of lineups for shows and festivals (including the newly announced This Is Hardcore 2016 – congratulations, by the way!) that more than showcase your genre versatility but The Body’s strong electronic influence was something pretty different for you, just as your speed and more refined technicality were different for them. Do you feel that you’ve effectively been exposing the grind, noise, and hardcore scene(s) to something a little more on the unfamiliar side? And has The Body’s electronic alternative pop doom fanbase kind of overlapped into your fanbase as well? Are you excited about new people discovering you through different experiences for you?

I like to think that might be happening sometimes. It’s always seemed to me that there’s a negative connotation with being referred to as a “gateway band”, but I’ve always thought that it’s really an honor to be in that position. We enjoy playing to new people as much as possible. If we were responsible even in the slightest for getting a young middle of the water kid into something like Gas Chamber or Work/Death than I would be very content.

Though I’m sure it was overwhelming at times, was having some live bodies (ba-dum-tiss) to bounce and build ideas from a pleasant experience? Did you learn anything about the oiling of Full Of Hell’s operations as a machine?

You know, we hit it off with the Body from the first time we’d met them. Socially there could have been no issue. As musicians, I think they’re absolutely brilliant and that they work best when collaborating. I think they helped show us what we were capable of in a situation where we weren’t able to be surgically rehearsed and prepared (as we usually are when recording).. It was good for the band to learn how to work in a new group dynamic and to work outside of our own immediate box.

With The Body being the best band in the world, did you feel any pressure to have to live up to such a massive sound and extensive collaborative backstock? Do you anticipate your next release using some of the elements you gathered from working with Chip and Lee?

We didn’t really feel any outside pressure, because Lee and Chip were confident in the project. At times, I did wonder how our project would stack against some of what they’d done previously (which is totally a daunting thought), but you just can’t compare any two records like that. I think every project we work on shapes us for the future. I think they helped encourage us and push us along a path we wanted to be on.

Does ‘One Day You Will Ache Like I Ache’ hold any foot in the door for more collaborative efforts and more learning experiences?

It’s funny, right after the release of the record, Lee called me to discuss doing ANOTHER record with them. Outside of that, who knows? We didn’t expect or plan for either of the collaborations we’ve done.

If you had to name at least one artist, active or inactive, to collaborate with who would be some of your top picks to work with and create a different sound for Full Of Hell?

I think it would be really cool to have Justin Broadrick do remixes of something we’ve done.

When they clear up from below the mangled tangle of crying sound, the lyrics on this release are especially dark, even taking the time to cover one of the most melancholy-charged songs of all time; how did you, Chip, Lee, and Spencer all have a hand in the creation of such vividly atrocious stuff? Did you work together to make lyrics cohesive? How was that process?

I wrote the majority of the lyrics for the record with a little help from Chip. I didn’t really have an overarching theme in mind when I started jotting down ideas, but one came about in the end. I only knew that I wanted the lyrics to have a specific written form, so they’re in sets of 4 in the layout, and they repeat often through the record.

You and The Body just had a European tour, were there any collaborative sets for those dates?

No collaborative performances were planned for the tour, because Lee isn’t going. We’re going to have to rehearse this summer for our US tour together to make sure we’re ready to play these songs live. We simply didn’t have the time or resources to get together before the European tour.

That’s very exciting but I’ve asked enough about Full Of Hell & The Body so now let’s just talk Full Of Hell. What sound do you foresee the ever-shifting and ever-impressive beast to be headed toward? Is the evolution open or are you all writing toward a goal?

The evolution is open as always, but I think the band is definitely pursuing a more death metal centered sound, with a heavy emphasis on industrial and electronic soundscapes. It’s been leaning in that direction for the past couple years, but we’re playing together better than ever, so I think Spencer is really going to try and push us hard for the next record, in terms of actual composition and technicality.

Apart from that European tour was a date in Europe that serves as a follow-up/extension of a set at Roadburn Festival in the Netherlands. It’s a little event known as Bloodmoon with a band we like to call Converge. In it they recreated and reworked old songs with different sonic accompaniments while also blending in new sounds using the help of the very talented hands of Chelsea Wolfe, Ben Chisholm, and Stephen Brodsky. Is that a performance and, essentially, experience that interests you as fans and artists? Would Full Of Hell ever be interested in doing something that experimental? Who would be someone you would love to work with you on it if you did?

We’re interested in seeing it, I think it’s cool they’re doing something like that. The idea of doing a large scale set really isn’t a strange idea for us at all, we’ve done things like this on a small scale already, and the collaborative tour with the body will be something like that as well. Last year, for instance, we did a few shows with our friend Kevin playing trumpet and our friend Flesh Trade doing noise.

When performing on tour, is there anything you guys like to go out of your way to do? Whether it may be a pre-show ritual or just going antique hunting for woodcuts or something of the sort?

No antique shopping, sorry to say. We like to eat disgusting, greasy food. We also sometimes go to the movies if we have time. Dave and Sam like to skate as much as possible nowadays, and Spencer and I are basically only on tour to play music, so we generally stay pretty single minded.

Are you guys currently working on your third full length or do you have some other tricks up your sleeve? Any time frame we should expect some information to come to light on it?

We are about halfway done with writing our 3rd full length. Profound Lore will be releasing it, and we’ve booked studio time for the end of the year. So, it’ll probably be out by this time next year, maybe a little sooner? I think we’ll also probably release FOH NOISE VOL 5 around that time. We also have a split recorded, which is going to come out in November.

Back a few questions I asked about how your lyrics on the collab were especially dark, which is surprising considering how much of ‘No One Deserves Happiness’ (whose cover has a drawing that resembles a Spencer, but I have conversed with you in person about the much deeper meaning to The Body about) was technically love song based. This, however, is prevalent in a lot of your lyrics. They tend to branch out into some very dark, malicious, and – more often than not – unsettling territories; what inspires you to get into that headspace? What does your intellect draw from? Do you read a lot or do you just have an extensive library of thesauruses?

I do really enjoy reading. I can’t really say if what I was reading at the time had any bearing on what I was writing though. It’s funny, I can’t really get into a creative headspace until I’m removed from the feeling in question. My perspective on these lyrics was more of an external position than a position of actually contemplating self-harm. I have a couple familial experiences that I usually fall back on, because it’s so easy to bore into and examine, but I think when I was writing these songs I was coming from a place of pity and empathy. How much can the human spirit really handle before it breaks? At what point is the pain just too much to bear?

Thank you so much for letting me waste some of your time with pedantic details about this wonderful band!

And catch them on their upcoming tours with NAILS 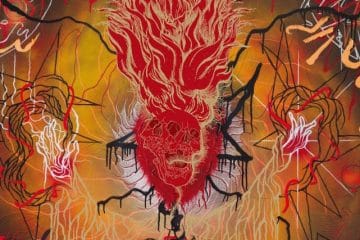 Met Chip at the London Blood Moon show, can confirm he’s a legit dude. Also, that upcoming split is going to be the greatest thing ever.

Chris Pantozzi I back that one million percent