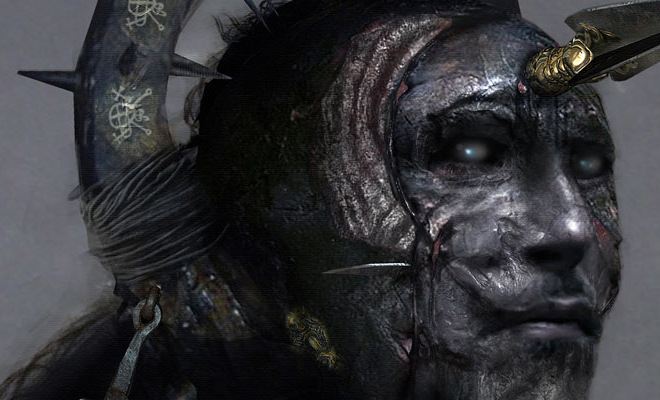 With my sadness over the recent passing of H.R. Giger, it seemed only appropriate when one of my other favorite conceptual horror artists, Paul Gerrard, sent me an email about Company of Shadows, his debut art book that explores the inspiration behind his characters. When I first discovered Gerrard’s work (post here), I was blown away by the dystopic and complex world he created. His characters ooze evil intent from every pore and are highly unique in a genre that can often seem repetitive. Needless to say, I am curious about the thought processes behind his creations, and that’s something that Company of Shadows is intended to shine light on – the ovum of his idea, the symbol or thought that germinates and grows into each nightmareish vision. Each page features a character, with Gerrard’s handwritten notes explaining its birth and the symbolism of each grotesque detail. In order to fund the book, he is doing a kickstarter campaign with some really awesome incentives, including producer roles on shorts he has in the works through his film company Beyond Darkness Films, which will be funded by the proceeds of his book sales. For a taste of his film work, you can check out his awesome re-envisioning of the horror classic Hellraiser, called Hellraiser: Origins. He has created a teaser/proposal (below) and you can check out all the info about his creative process here. Check out a preview from Company of Shadows below!