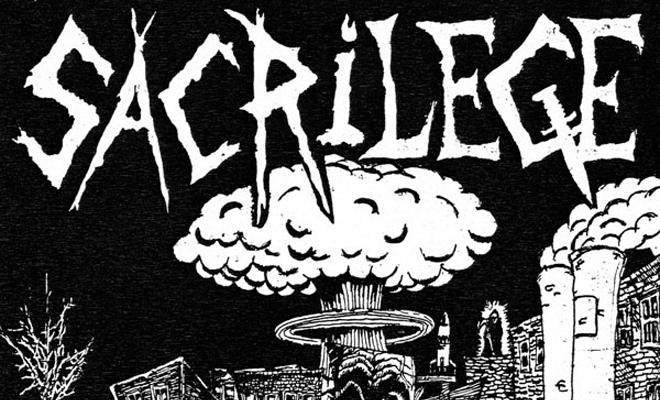 Sacrilege NY were a mystery to me when I first started going to shows in 1985. I’d always been fascinated by their image: Four spiky-haired, bullet belt-wearing punks playing D-beat-influenced tunes to skinhead crowds at CBGB’s. The few that managed to see them live, in their prime, raved about their explosive performances. To the rest of newcomers to the scene, like myself, they were an unknown entity.

They would have remained a curious footnote, with their Agnostic Front/Reagan Youth pedigree and all, except for the fact that I managed to get a copy of their nine-song demo in 1988. I came to realize that one of my favorite bands at the time, Nausea, had their roots in Sacrilege. Half of the songs on said demo became Nausea songs when Sacrilege guitarist Victor Venom started up the latter band in 1986.

Flash forward to 2013. My Wardance label, in conjunction with Radio Raheem Records, put out an LP of two Sacrilege demos from 1985. We searched high and low for all the original members, but their singer, Clay Rice, could not be found.

Clay recently got in touch with me after seeing the LP in a record store. I eventually sent him some questions and he graciously answered them, and as a bonus, sent along some of his killer artwork to share with all No Echo readers. There are some cool stories here about growing up punk rock in Virginia, living at the legendary hangout the Vats in San Francisco, squatting on the Lower East Side, and other anecdotes that continue to fill up the Sacrilege NY story.

To start off, tell me how you came to move from Virginia to NYC and when?

I grew up in the1970s, when Virgina Beach was still a relatively small town, unlike now, being the most densely populated region in all of Virgina. My family did well. My father worked in the auto business and VB being a military town and growing, it should have been ideal. But in 1979, I heard the Sex Pistols’ Never Mind the Bollocks, thanks to an English neighbor, and was taken with the intensity and rawness of the sound immediately. I was a skateboarder and this music was closer to the tempo of life I was living. By reading Thrasher magazine in 1981, I discovered new bands and a few like-minded friends in a mostly conservative suburban atmosphere, it is home to the 700 Club and very military. My parents caught the “tough love” craze (that was a real problem at the time, mostly for the kids) and swiftly and promptly they kicked me out of the house, because of my freaky friends, hair, dress, etc. But it wasn’t just the parents, the high school I was attending at the time, F.W. Cox High School, decided to expel myself and Bob Davis (a.k.a. Fishman), along with several of our friends, for minor dress infractions at the same time. It was just complete bullshit. I wasn’t a bad kid and would have had an art scholarship to college, but VB was afraid of us and made life difficult. The cops, the parents, the rednecks etc., I knew I had to leave. I was 17 and went to Washington D.C. The music scene there was amazing in 1982, it never would be as good a scene as it was then. I lived in the old Wonder Bread factory and ran with the Rat Patrol, a kind of low-level punk gang run by One-Eyed Bruce. On a visit to VB in 1983, Tim Copeland (who had recently returned to VB after living in Hamburg, Germany) and I decided to hitchhike to San Francisco. Tim and I were part of a very small punk crew called the North Wolfsnare Gang, at least that’s what the cops called us in VB back then (picture the movie Suburbia). Tim had played guitar in a short-lived band called Anschluss, with Jim Schaffer on drums and Charles Miller on bass, but he wanted to escape the oppressive small town mentality VB was so guilty of in those days. Three days and several near death experiences later, we arrived in San Francisco, and after a brief stay with C.F.A., we found a place to live in the now infamous Vats (the old Hamm’s Brewery) in the Mission District of the city. This was as close to punk rock college as you could get then, we hung around D.R.I., M.D.C., Dead Kennedys, and many others. We got to meet and learn the craft from people we admired and respected. We were particularly impressed with Crucifix. Tim and I both liked the European bands like Discharge, GBH, The Exploited, and Crass, but here was an American band that looked and sounded really cool, that were making it happen here in the US. We would climb a drain pipe, two stories, to sneak into the On Broadway every time they played, they were amazing, we were fans. We also saw Metallica before they blew up and were impressed with them, too. Tim and I decided to move back east to NYC. It was the destination we chose to make a band. This was 1984 and I had never been in a band before this, but would soon sing my first gig ever at none other than CBGB’s.

Thank you to Freddy Alva!