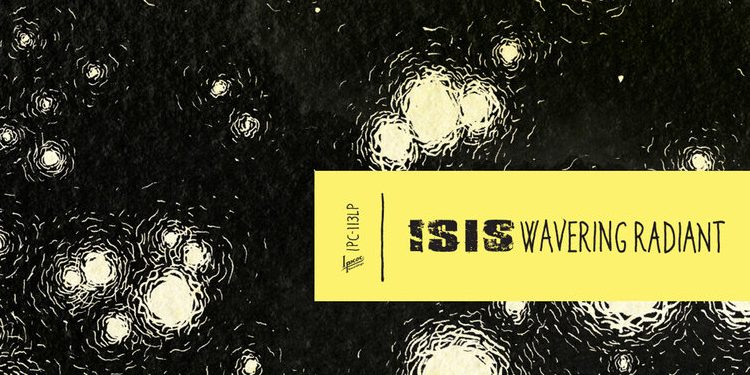 The final Isis record is lush and sad, a far cry from their jagged, formless early work. Immediately it’s obvious that there’s a change in the water; their structures are notably clearer, the synergy between musicians is stronger and the tracks are clearer, warmer and more melodic. It’s understandable that Isis broke up feeling their mission was complete, but sad that they did so as soon as they tightened and honed their sound.

Wavering Radiant’s use of traditional melody sits well alongside the skills they’ve developed previously. Isis were rarely a band whose calmer sections were soft or lovely. Their gentler sections were never a saccharine reward for weathering the storm; they were an exhausted gasp after a prolonged burst of violence. Always peppered with noise or hiding threats, they function both to showcase the experimental elements of their influence and as an outlet for the keyboards; once these are shown in isolation they’re much easier to pick out in subsequent energy lulls. As a result of their noise leanings, melodies were always a little unusual, perhaps a little too ordinary for a brazen band. But here they’re one of the key features, resulting in a significantly less-hostile record.

Opening with Hall of the Dead, the keyboard lines snake around one of Turner’s signature scratchy riffs. The tone is explorative and contained, maybe a little regal and detached. The melody here is immediate, and the control of the track is stark; of all their Tool-sounding moments, the influence is especially clear here, rhythms working against one another. The track is especially bold with vocal melodies, the latter half of the track flowering with some especially pretty cleans before the shimmery instrumentals rise up to cover them. The keyboard textures are key here, building in ways not seen before; when they crescendo they emerge as a soft, warm carpet of noise.

Ghost Key floats into life, an aquatic mirage that bursts into life when Turner’s harsh vocals kick in. Here the track is characterised not by the explosive sections but by the melody, more immediately obvious than previously. Later in the track this builds and drops away, where before these calmer sections may have been content to rely solely on textures or a wash of strange noises. Hand of the Host continues this theme, opening with a simpler, lighter texture. Here the aggression is a little more forthright, and the quieter moments more driving. By this point it’s obvious how much less crowded the tracks are, leading to more interplay between musicians, a particular highlight being Jeff Caxhide’s dreamy basslines.

Wavering Radiant conjures images of space with an expansive, futuristic soundscape. It’s not hard to imagine a panorama on a space shuttle, hinting at interstellar threats. Stone to Wake a Serpent is one of the pacier tracks that slithers around a tight drum/ bass groove. Here the keys take on an organ-like approach in some sections, and the vocals come in layers, bolstering the sweeter melodies. Certainly less abrasive, this track is not so much soft as it is digestible, and when they branch out to a drawn-out guitar wail it feels like a well-earned detour rather than another leftfield element. By this point the album is certainly more welcoming and better-structured than before, the band taking the time to mature in key areas.

20 minutes/ 40 years is a bassier, more languid track. Initially foreboding before expanding into a heavier, more straightforward number, it fills out the bottom end of a record that favours less throaty material, eventually shimmering and bursting into hot flames as it ends. Finally, Threshold of Transformation is deep, driving offering built around an active riff. It’s here that Isis remind us that they were a metal band; their powerful riffs were just as much a part of their sound as the off-script, leftfield elements. That’s it, then. They didn’t know it at the time but that’s the last Isis track on a full-length studio record.

In the years since there’s a general consensus that they peaked a little early, around Panopticon. For a band who pushed an envelope without being grating or bloated with unsuccessful ideas, to end their journey exploring melody and structure seems a little pedestrian. But even a cursory listen to Wavering Radiant shows an album flecked with rare magic, promising new ideas and directions at every turn, sparking with new interpretations of heavy music. And, in a more manageable package, perhaps the most successfully-communicated of all their releases, or in any case the most welcoming and least oblique.

What a shame that Isis had to end. But fitting that their last effort was the most coherent and the best example of them playing together. It seems appropriate to re-watch the reunion video which celebrates their long and storied career where – even after a long absence – the successful synthesis they developed here is fully realised.