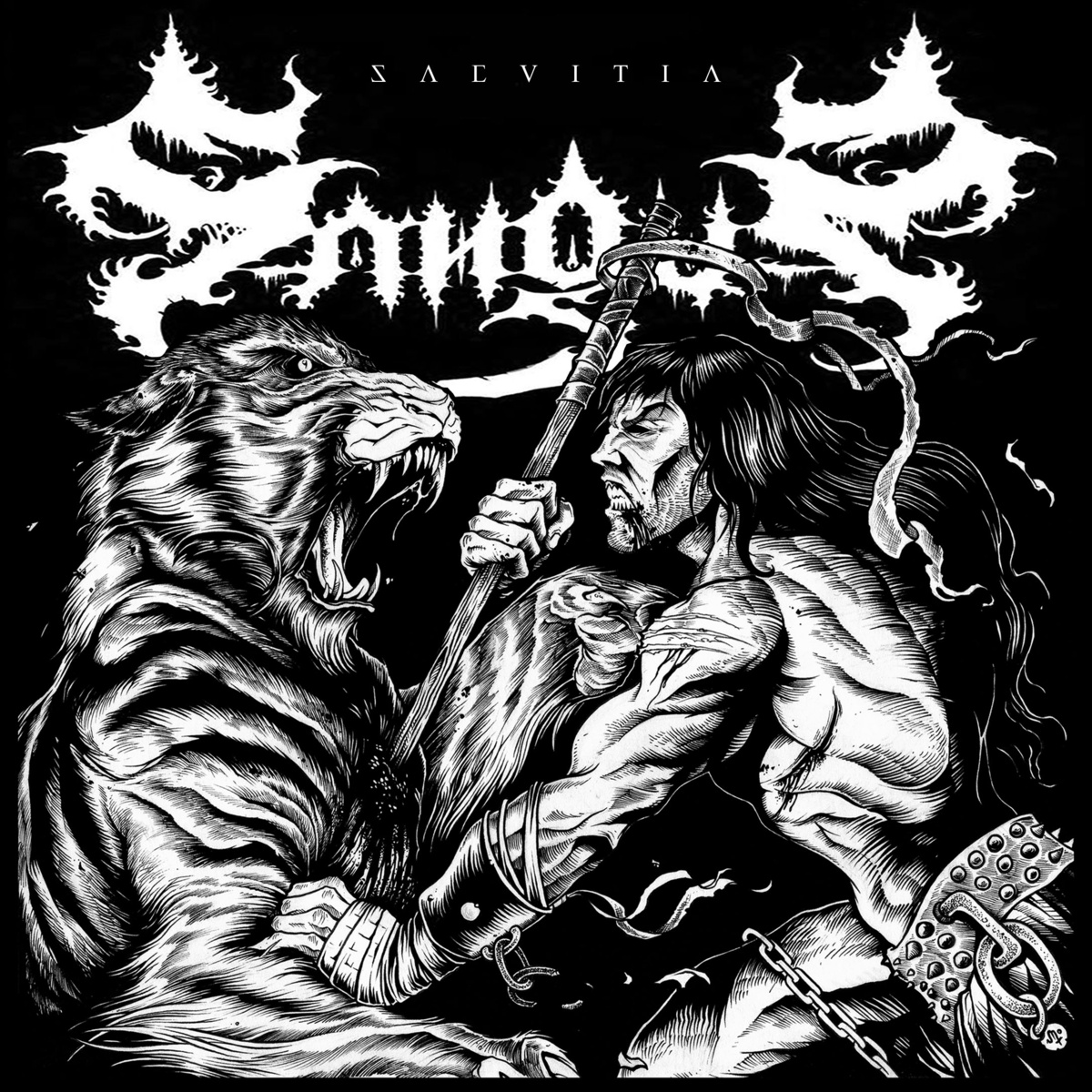 Sometimes life swings a morning star directly into your face, causing one to snap back in sudden shock. Well, life just did that a few weeks ago in the form of Blackened Thrash peddlers, Sangus new EP Saevitia. In all honesty, I am still trying to recover from this attack brought into the world by Eternal Death Records. Located in the frozen wastes that is Providence, Rhode Island, Sangus have come forth from their darkened lair to unleash a throat-ripping, werewolf-like blitzkrieg upon an unsuspecting population. While sharing members with monolithic Doom Masters Churchburn, in no way do they keep this record down tempo. In fact, they are the polar opposite. Even their mid-point breakdowns and guitar solos are played at a pretty high speed velocity, and it’s easy for one to loose track of where they are on the album during initial digestion, as it blows past your face with its overall viciousness. It’s an absolute beast of speed, blast beats, snarling vocals and profanity. Composed of five blistering tracks, this is a take-no-prisoners release and is a great introduction for those who might not have had the chance to delve into their profane sonic scriptures before this. With all the songs clocking in at under three minutes, Sangus leave no breathing room or time for recovery. Forget cold mountains and dark castles – this band is all about blood, beer and hate, which comes out perfectly via these songs. The guitar work is furious, flying all over the place and spitting out napalm-infused parts over and over again. The bass isn’t drowned out in the mix, which tends to happen with some Black Metal projects, and it adds a solid, heavy backbone to the songs. Drum-wise, the blast beats and the overall work on the kit are solid, being fast paced, but never overbearing to the point where it just sounds like wind chimes clinking together during a hurricane. Kudos to everyone involved in this project for knowing their roles and what needs to be done, without having to do any showboating with their skills in an unnecessary way.

From the very first song, which is the title track of the EP, Sangus take a no nonsense approach. One can almost certainly taste the phlegm their vocalist must conjure out of his throat, as he has one sickening, goblin-being-tortured-for-a-week voice. What struck me most about this release was the Crust influence throughout a few moments, which is done in sparing amounts, and with an absolutely devastating application of the sound’s classic style on the second and third tracks. It’s a cannibalistic, tasteful insert of the crust style, without being an unnecessary addition like some other projects that will remain nameless. It doesn’t sound patched in like some attempt at a musical Frankenstein, but flows well with their Thrash/Black Metal leanings. In fact, the brief use of D-Beat drums on these songs just makes it sound more varied and original, beckoning one into their blood-soaked circle pit.

Even with the album’s length at a brief fifteen minutes or so, I found myself playing it over and over again. It’s a solid release from a relatively new spawn of Yog-Sothoth, that leaves a dark hunger for more of their musical offerings, which is kinda of a shame considering it’s only an EP. A proper full length is hopefully being worked on by these ArchLich’s of the East Coast in their forbidden, dank crypt. I can only imagine how sickening another twenty minutes or so of more material would sound from them. Till then, I’ll take this release as an appetizer for what Sangus has in store for us all as they prepare their bloody main course. Yet another album given to the metal world by the New England region that should under no circumstance be ignored. Bon appétit, you fiends. 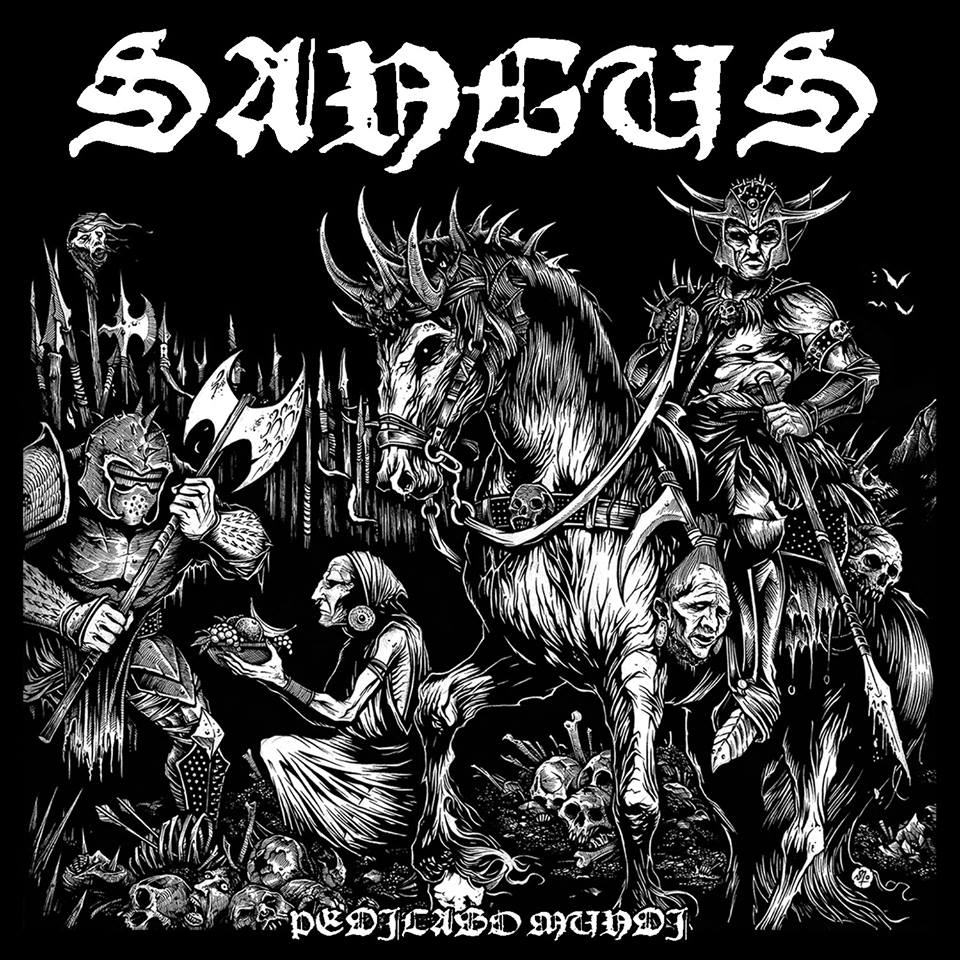 SANGUS is a band that never fails to decimate our ear drums with their blistering riffs, so we are stoked that they have a... 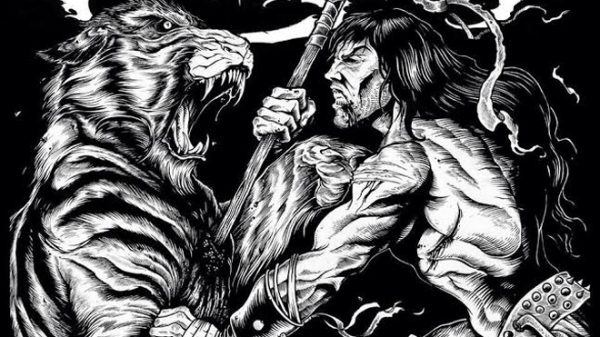 Unholy pure death…excuse me as I inject the black flames of the underworld into my ears! Actually, all I have to do is blast...