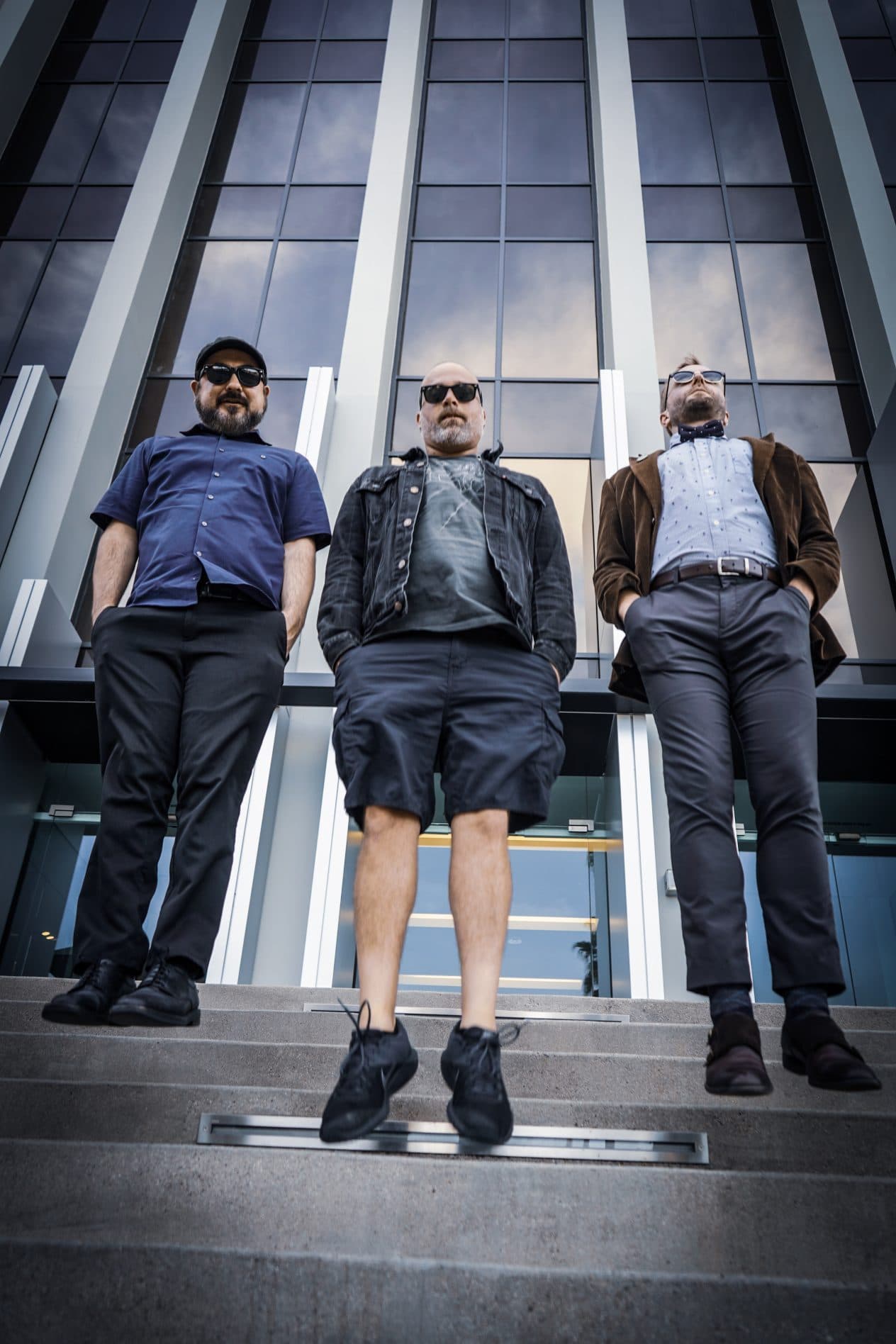 San Diego has a long history of influential bands and style in the underground music world. A thick family tree of players have splintered into projects that have stomped a plaster cast footprint into vinyl rarities and obscurities. A figurehead in the realm is Mr Bobby Bray, guitar tone manipulator and six string shredder most notably for The Locust and Holy Molar. The Institute for Navigating the Universal Self or INUS was conjured up in 2011(under the name of Innerds) as a two-piece powerhouse between Bray and longtime friend Brandon Relf of Sleeping People notoriety. The present day finds INUS with a third party, Chad Deal(Phantom Twins) and on the cusp of a full length release “Western Spaghettification” from Three One G records next month. Bobby took the time to come clean about the recording process, their debut music video and more, as well as sharing a track premiere with us… “There Was a Fish in the Percolator”.

*Who are the members of the Institute and their respective duties within?
[BB]:
Brandon Relf is the Identity Crisis Prevention Counselor and drummer.
Chad Deal is the Dean of Unfairs as well as bassist/vocalist.
I [Bobby Bray] am the Academic Deflector and guitarist/vocalist.

*Explain the concept behind the video for ‘Time is a Person’, who filmed and directed it?
[BB]:
It’s a video collage comprised of propaganda by our corporate academic competitors.  It’s meant to highlight the common archetypal images they use to try to recruit students, such as sexy architecture, squishy chairs, and ‘old new media’. One aspect of overpriced for-profit higher education is that any particular technical knowledge acquired will be outdated almost as soon as you graduate. Whether or not someone gets a degree, the learning process never stops. That’s why our admissions office offers free intuition as the first step.

*What are some of the influences behind the songwriting process for ‘Western Spaghettification’?
[BB]:
Renaldo and the Loaf vocals and the inner dictation of musical ideas emanating from the communities of microbiome in the second brain (human gut).

*Where did INUS record and master the album? How do you feel with the end result?
[BB]:
Tracking the album dates back tens of thousands of years at UCSD’s Conrad Prebys Music Center, a sexy building in La Jolla California that cost over 60 million dollars to build. The album was then shelved and left to ferment for another couple of thousand years. Recently we were contacted by the Zandarian hive mind to finish the album, and so we did—you don’t want a Zandarian hive mind guilt tripping you out of bed every morning, trust us. Mastering was completed by Tom Erbe partially at his own studio and partially at Studio West. We are trilled with the outcome!

*With the record coming out on Three One G records, discuss your relationship with the label and the family tree that exists there.
[BB]:
Justin Pearson, who runs Three One G, and I play together in The Locust. We were also in Holy Molar together. Brandon’s band Sleeping People toured with The Locust back in the day. Three One G is known for releasing some really fantastic out there stuff, so for us it seemed like a natural fit.

*Any touring to support the record or plans the people should be looking out for?
[BB]:
We have an album release show planned for SD in August. We will most likely do some west coast dates by the end of the year.

*Discuss the Universal Self, the importance of self realization or spirituality within the band or your personal lives.
[BB]
As the evolution of the collective unconscious continues to unfold it is important to keep tabs on the forces that are steering the ship. It is also important to realize that sometimes you need to get an untainted hand on that wheel of destiny and spin vigorously. And remember, the secrets of the universe are INUS!

*What is something you hope to accomplish with INUS?
[BB]
To help instill a sense of responsibility in the guts of American citizens. For example, the US has been killing innocent people, including children, with drones. These types of imperialistic crimes against humanity have been going on for decades.

In this article:Bobby Bray, INUS, Phantom Twins, Sleeping People, The Institute for Navigating the Universal Self, The Locust