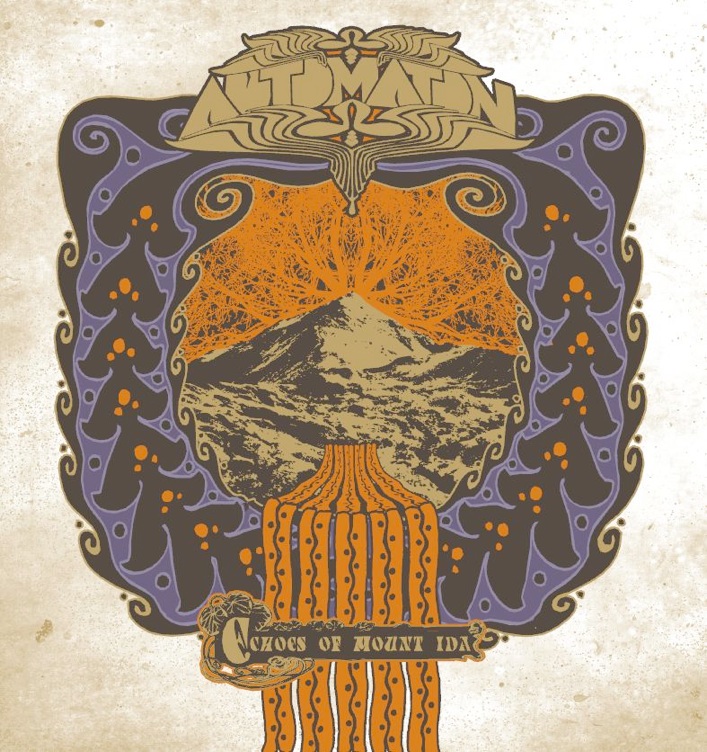 A few months back, I was lucky enough to catch a great gig back in Athens, which was kicked off nonetheless by a band called Mogg. Solidly standing on drone/doom, the band unleashed hell on stage, with a torturous pace, minimalistic rituals and sludge outbreak. Even though Mogg have not yet released music, through them I was introduced to two other great acts. One being Omega Monolith, who recently released their second EP, Vile, and the other being Automaton.

Compared to Mogg and Omega Monolith, Automaton is a more straightforward beast. The doom/stoner act relies on the weight of their guitars and the psychedelia spreading from their jam session-like state in order to hypnotise its listeners. That has been the basis for their 2013 EP, Echoes of Mount Ida. However, two years after, the band is putting out an extended version of that EP, with the three original songs remixed and remastered, and throwing in a new track, “Fear.”

What comes across very distinctively with Automaton is the manner in which they are able to cause transmutations to their sound. When the opening track properly settles, it is the sludge dirt radiating through the doom riffs that sets the tone, having a fairly old-school approach to their riffology and with the vocals a bit lower in the mix. The same sludge-induced heaviness comes in “Fear,” filling the space as the minimal pace and deep voices go to work. However, of equal importance is the stoner vibe that rises to the surface of Automaton’s music. Near the end of “Going Down” the band transits into a stoner rock jam, as the heavy riffs keep pummelling down. The groove is exquisite, and can be awakened in other moments, such as “Fear” in order to bring in a state of psychedelia.

The pace always accompanies the mode that Automaton is exploring. The opening track carries a certain ritualistic quality, remaining fairly static but acquiring a cool groove. Similarly, “Fear” takes on a more minimal approach, not giving you much room to breathe, evolving between different parts, ranging from ceremonial to tribal-esque. The interesting switch occurs with “Beast of War,” the pace of which takes a turn for the militaristic. The track itself has a fair amount of groove, but it differs from the previous tracks, due to its more straightforward heavy doom vibe. It is overall a more upfront track, with a more aggressive outlook. That attitude also washes over “Breath In Stone/Echoes of Mount Ida” with the band resulting in a stoner/heavy rock state, but with a twisted, downtrodden aspect lurking just below the surface.

Even though Automaton’s music does not give way to much comfort, it is usually the guitar leads that are able to project a bit more emotion into the dim structures of the band. In the opening song, “Fear,” as well as on “Beast of War,” the lead parts swoop, seamlessly surfing through the stoner-infused soundscapes, elevating the tracks. In the final track, the lead parts are also dwelling with the more experimental realm, with a more distinctively dissonant quality verging towards improv territory. But the leads are not the only game in town. Effects make an appearance, no matter how subtle in “Beast of War,” slithering in the background with a bit of feedback and noise, adding more variety to the grim structure of the track. Similarly, the closing track sees a more in-depth exploration of the space via the use of effects, resulting into the spawning of further soundscapes and an excellent rise of tension. The parts lean towards the extreme in this instance, forcing the track into a chaotic state near its end. However, the most impressive moment in terms of psyched out parts, is the “updated” opening track by far, with the inclusion of Dr. Space, aka Scott from Oresund Space Collective. The track is turned into space rock anthem with the spaced out effects leading the way through the mesmerizing haze of Automaton, travelling through long-forgotten rituals to space explorations, resulting in a loss of self in the process.

With heavy music it is all about getting the right feeling, and Echoes of Mount Ida definitely succeeds there. No matter if Automaton find themselves driven by the doom spirit, weighted by the sludge dirt or lost within the heavy rock and stoner grooves, the music always delivers. Hypnotic states, dystopian nightmares and alien jam sessions are all merge into a single entity in this work.