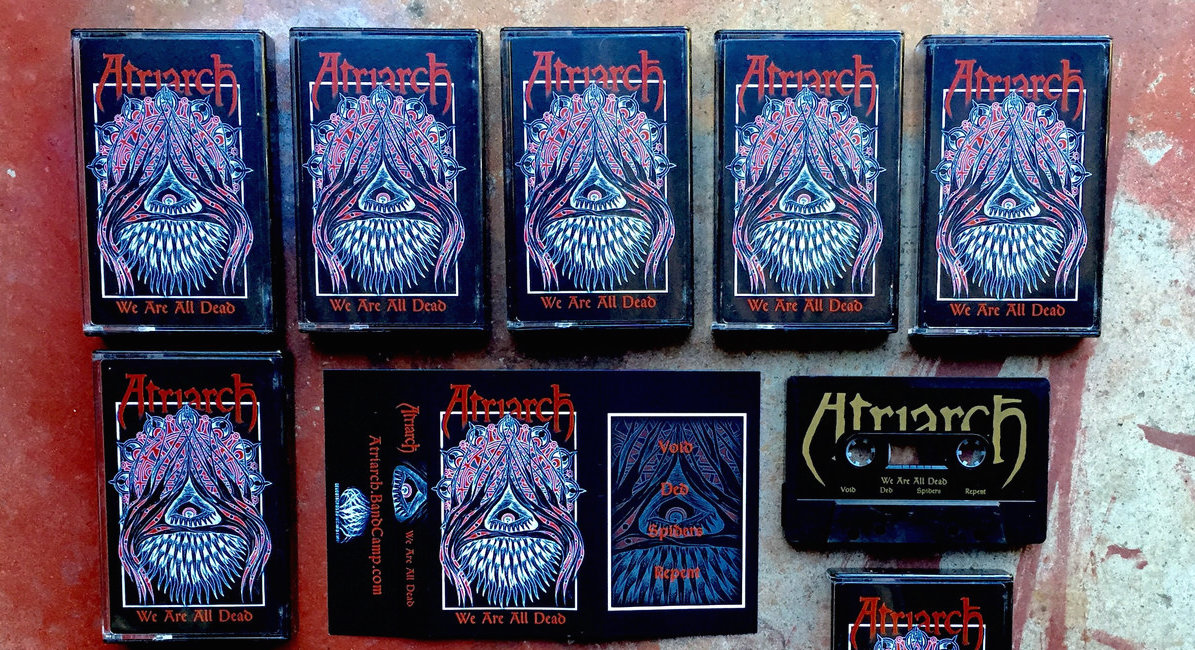 One of my favorite bands of the past decade is Portland’s masters of darkness, Atriarch. Live, the band makes time stand still. Atriarch is releasing some brand new odes to the darkness with We are All Dead, which was recorded last month. If this had been left to the devices of a label, we would not have heard these songs until next year, so here’s to being proactive. The new release finds songs that are more focused in a conventional sense, with some of the more ritualistic trappings toned down. New bass player Timothy Haskins drives the first song, simply titled “Dead,” Here the vocals take on a grim, deadpan punk narrative with lyrics that seem to be self-eulogizing. It’s perhaps closer to death rock, as it’s stripped down, the guitars of the band’s other new addition, Joshua Dark, filling the spaces and adding intensity as needed. Sonically, this gives the band a shift in direction, as it has not been uncommon for some of the heavier moments from their catalogue to play off layers of heaviness. The rawness here carries a greater sense of urgency, rather than trying to smother you in sludge-like density.

They delve into the dismal depths of punk on “Repent.” The new bass player really works well with their drummer to lay the groundwork for the song to explode off of. When Lenny cuts loose and goes into a scream, there is less black metal in the harsher vocals and more cathartic hardcore. The songs are not long sprawling dirges and find the more atmospheric moments efficiently packed into the songs. The tribal creep of the drums sets the tone for “Spider.” The guitar rings out with a different tone on the opening verse, but proves it can still bring the low crunch that is the band’s signature. These new songs give the vocals much more room. The mix of these songs helps to place Lenny at the forefront. The new guitarist shows a great deal of restraint and allows the bass to carry the weight of the song as needed and adds varied shades of gray to the song by haunting the corners of the verses. The band has not abandoned their more hypnotic side as shown on “Void.” Clocking in at almost seven and a half minutes, by most black metal or doom standards these days it is very efficient song writing. While metal is a dynamic that is tapped into on this EP, it is not solely what defines these songs. The screamed outbursts convey an emotional breakdown as the rest of the band lurks behind him, bringing the shadows to maintain a more ritualistic pulse. Four minutes into the throb of this song, they continue to build the seething drone. Lenny declares that by being everyone you hate, he is the void. The tangible rage conveyed is pointed both outward and inward. This EP marks another step forward in the evolution of this band as they continue to grow as songwriters, proving emotions can be heavier than the weight of abusing your instruments with pounding distortion. I hold the bar for these guys pretty high, and they continue to give me what I need.

In this article:atriarch, death rock, devout records, metal, Portland, post-punk, we are the dead