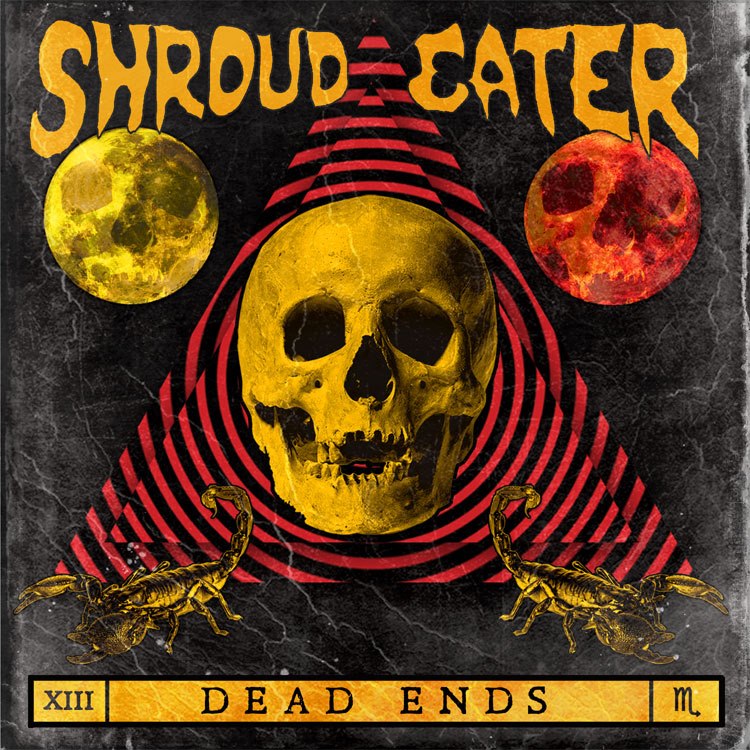 Explain the origin of the band’s name.

Jean: “Shroud Eater” is a term for an ancient Eastern European ghoul that would kill from inside its grave. A very early form of the traditional vampire. It was custom that in order to kill this ghoul (again) a brick would be shoved into it’s mouth. Pretty gruesome.

Are there any central themes or concepts between Shroud Eater and Primitive Violence Records?

Jean: Central themes in Shroud Eater definitely deal with revenge, betrayal, isolation and “Other-ness”. In regards to my label (Primitive Violence Records), the theme of bands I want to work with is basically bands that are pushing to do something different in whatever scene or style they choose. For example, what speaks to me about Orbweaver is how fearless you guys are when creating “death metal”. It intimidates people because it’s not the standard. I like bands that are willing to challenge whatever stupid musical paradigm elitists or whomever have set. Shroud Eater is not strictly a traditional “doom” or “sludge” band. There are so many bands calling themselves this or that genre but so few bands have their own, TRULY their own voice. The third release for Primitive Violence is a band that I feel fits into this theme and I’m pretty excited to get everything rolling with them soon. What first interested you in dark music? What fueled your desire to create?

Jean: Dark music spans a lot of ground. Dark music for me is anything from The Cure to Eyehategod. It interests me because it speaks to me. I like minor chords and sad music, and being able to identify with those things made me want to get those feelings out of myself in a similar fashion. That is my desire and goal within creating music, to be able to get these emotions that I can’t necessarily communicate with words out of my self before they make me insane.

Janette: Although I’m known as the “sunshiney” optimist and annoying joker, I’ve been drawn to the darker side of things from a young age. Horror movies fascinated me and naturally, dark music followed. Black Sabbath, Danzig and Joy Division spoke to me at an early age and I like themes of occultism, evils that lurk, and personal despair. Normally, I like writing moodier, somber music…I like where it takes me.

Felipe: Good music is dark, mysterious and magical and those kind of things interest me.

Tour story time! What’s the weirdest thing that’s happened to you guys on the road? Additional question – what would be your dream line up for Shroud to tour with? (Realistically, no dead musicians)

Jean: I think weirdest thing for me was when our van broke down in Philly and we were stuck in a Pep Boys for three days waiting and wondering if we were going to be able to finish our tour. We were super fortunate that those kind and gentle souls in Clamfight took us in for a few nights of sleep while we got the van fixed. By Sunday when we were STILL waiting in the lobby and hoping that our van could make the 4 or 5 block test run without breaking down, we were all pretty delirious. We started roaming the Pep Boys shop at one point and had like three arm fulls of bullshit we wanted to buy for the van (“A French-Fry cup Holder?! OF COURSE WE NEED THIS!!!”) Luckily we just walked out with a devil-head cigarette lighter and a fixed van. As for a dream tour lineup, High on Fire, Jucifer, Ufomammut.

Janette: Having a “Jerry Springer” moment with a toothless redneck who blamed me for not knowing the damn shower wasn’t working at the Budgetel Inn in Little Rock. I was caught in a crossfire of unintelligible banter between the hotel manager and attendant at the front desk. Then we went to a tiny Korean doughnut shop and shook off the desire to destroy the place by scarfing down the best fucking doughnut of the Western Hemisphere. Cream dream tour line-up would be Shroud Eater as support for High On Fire, Ufomammut or L7.

Felipe: With Holly Hunt spending a night in a motel room where a crime happened who knows how long ago. Dream lineup to tour with would be Black Sabbath (all original members) and The Melvins. What are your musical guilty pleasures?

Jean: I do like New Wave, or early 90’s rap (Ice T, Easy E, Snoop Dogg, Tupac, etc.) Sometimes I like to partake in “Sucka-Free Sundays” with Janette where we cook and listen to De La Soul and A Tribe Called Quest all day.

Janette: My name is Janette Valentine and I like bad things. I can whip up a sweet mix of 80’s electro, 80’s & 90’s hiphop and classic Miami booty tunes that’ll make everyone shake their groove thang. And I think I know every lyric of every 80’s heavy metal / hair metal song ever written. Also, I dream of 90’s dance parties. I have questionable tastes, I admit it.

Felipe: None, I am proud of what I like. Maybe not guilty of disliking rap (crap) and today’s pop music.

You guys are a cornerstone of the Miami metal scene, how have you seen it change and grow over the years and where do you see it heading?

Jean: I wouldn’t say we’re a cornerstone of any scene in Miami. We are Shroud Eater – we don’t really “fit in” to any particular scene and we haven’t been whole-heartedly embraced by any scene here either. I’ve always been a loner, an outsider, I’ve never found comfort in groups of people, quite the opposite, so I’m used to this feeling of our band’s “outsider-ness”. That said, my own outside-looking-in perspective on Miami’s scene is that it is thriving – there are a lot of great musicians and bands across the spectrum of musical genres. But people’s motives for supporting one band, not supporting another, going to this show instead of that one, are what inhibit any scene, anywhere. If you love the music, then go to the show. If you love the music but are concerned whether it’s “cool” to be seen at the show, then stick your fucking head in an oven. A friend who’s been in thrash, hardcore, punk, all sorts of different bands since the 90’s down here told me that the Miami scene has always be “clique-y”. I guess a decade later not much has changed.

Janette: There IS a scene…people within different groups, be it metal, grind, noise, garage, punk…are all very supportive of each other. It’s cool when you see people crossing over and going to different shows or seeing varied line-ups. We’ve got such a cultural and musical mish-mash in Miami especially, that it makes sense that there’s lots going on in the way of music. The metal scene is its own entity. People that live metal, die metal. I don’t think much has changed in that aspect. What changes is the people that go to shows, their interests and their motives for supporting a certain “scene”. Some peeps like to be “seen” at the “right” show and others are in it for the love of music, period. Some things you can’t control but metal never dies.

Felipe: We do have some support from the scene here, but if feels like we can travel to a different city or state and get more support from their local scenes. I hope we influence and inspire people to make bands that keep heavy, loud and evil music alive.

Being indie vs having a label behind you, what are your thoughts?

Jean: I’m grateful to The Path Less Traveled Records for putting out our CDs, as well as Divine Mother Recordings and Red Moth Inc. who are co-releasing the vinyl edition of DEAD ENDS. It’s cool that someone believed in what we were doing enough to want to put their money where our mouths are, so to speak. Every bit of help, helps, and I can only hope that it’s the first steps towards a bigger goal, a bigger audience, a bigger reach.

Janette: Indie band. Indie label. I’m happy to know people dig what we do and are helping us co-release. It’s a huge help. Being on a “big” label seems rather unrealistic nowadays mainly because the internet is so overly-saturated with so many bands…new bands, old bands, awesome bands, shitty bands. I think if an indie label digs you enough to provide financial support it’s a great form of flattery because they DON’T have tons of money and it’s a big risk for them. This is what keeps the underground moving along.

Felipe: So far with the label we got some financial support when our van broke in Philadelphia and online propaganda. What was the name of the first band you played with/played shows with. What happened?

Jean: The first official band as far as playing shows, recording and such was The Righteous Devices. Grungier than punk, and an all female line-up. Basically a ticking time-bomb.

Janette: I’m with Jean on this one. The Righteous Devices is what solidified our existence in a band. It was fun and it was dangerous.

How long did it take you to know that you weren’t going to be a hobby musician?

Jean: Personally, I knew I was going beyond “hobby” when I bought my Ampeg V4 and a 4×12 cab. The first time I played in front of that roar it was intoxicating. I knew I wanted to be existing in that feeling as often as I could.

Janette: After The Righteous Devices disbanded and Jean and I spent a good year painstakingly trying to start a new band I realized that we weren’t gonna stop. Once we met Felipe and began SE we’ve evolved into a working band and can only foresee that we’ll continue on this path.

Felipe: Since I was born, good music and Rock and Roll is my passion.

Jean: No particular order, cuz there’s a lot of stuff that I didn’t get into this year that I absolutely have to visit once I get some extra music-purchasing money, but some stand outs include: Orbweaver “Strange Transmissions…” (DUH!), Hollow Leg “Abysmal”, Windhand “Soma”, Inter Arma “Sky Burial”, Lord Dying “Summon The Faithless”, and Jucifer “Russian Album”.

What is your favorite food? Can we go get some of it?

Jean: My favorite food is probably anything that is spicy, or can be made spicy. I’ll eat just about anything and I’m HUNGRY right now. Let’s go!

Janette: Hot, delicious Indian food always hits the spot. But there’s nothin’ like the magical powers of beer ‘n’ wings, beer ‘n’ a burger or an awesome slice of pizza at 3am. Fuck yes, let’s eat.

Do you play street fighter? No? This interview is over!

Jean: Of course! I was playing Street Fighter before you were born, Scott! That’s not to say you won’t utterly kick my ass at Street Fighter of course.

Janette: Last time I played Street Fighter was in an arcade at a mall while skipping class…probably a hundred years ago. Oooh…methinks we need a Street Fighter movie night!

Felipe: That is for pussies! I am on the streets working, hustling and learning how the devil works – I AM a street fighter.