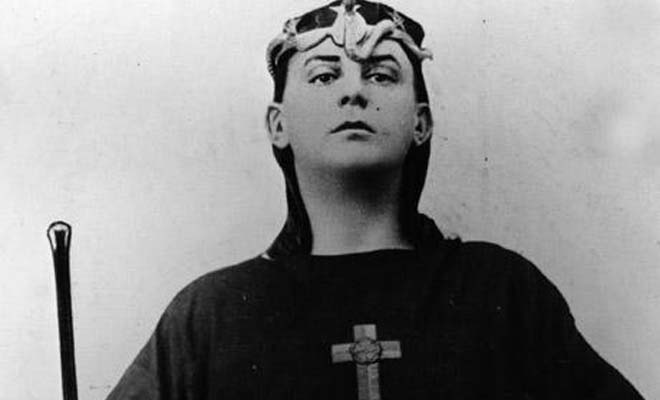 In 1898 the Wickedest Man in the World was feeling thoroughly sorry for himself. The occultist Aleister Crowley’s first great love affair, with fellow Cambridge undergraduate Herbert Jerome Pollitt, was in ruins, and he took to poetry as his only solace.

“When my sick body in his love lies drowned/ And he lies corpse-wise on me, nor will rise/ Though my breath shudders, and my soul be dead,” he wrote – and much, much more – in a tiny notebook of unpublished manuscript poems which has recently resurfaced.

The actor and rare book dealer Neil Pearson, who will exhibit the little book at the Olympia antiquarian book fair in London later this month, concedes that this is not great poetry. “The verse is rather broken-backed, and vulgar where he is trying to be honest. But it was written at a time when he was feeling heartbroken and vulnerable and it does somehow humanise him – and God knows Aleister Crowley, more than most people, needs humanising.” Crowley, who called himself the Great Beast 666 and pursued a lifelong interest in magic and the wilder shores of religion and sex, was nicknamed the Wickedest Man in the World by the British magazine John Bull after a former follower made a series of lurid allegations, including the claim she and her husband had been forced to drink the blood of a sacrificed cat.

Born in 1875, Crowley was a novelist, yoga enthusiast, heroin addict, occultist, sexual adventurer, magician, some say spy, and perhaps most improbably, enthusiastic mountaineer who scaled K2, the Eiger and many other peaks. In 1898 he was 22, and had fallen heavily for Pollitt, a fellow undergraduate at Trinity College, Cambridge, renowned in student circles as a theatrical female impersonator under the name Diane de Rougy. They met in October 1897, broke up before Christmas, wrote yearning letters to one another over the holidays, and became lovers on New Year’s Eve, an event recorded by Crowley as “admitted to permanent office in the Temple, midnight, December 31, 1897”. A few months later it was all over.

Crowley would later write: “Pollitt was rather plain than otherwise. His face was made tragic by the terrible hunger of the eyes and the bitter sadness of the mouth. He possessed one physical beauty – his hair … its colour was pale gold, like spring sunshine, and its texture of the finest gossamer. The relation between us was that ideal intimacy which the Greeks considered the greatest glory of manhood and the most precious prize of life.” Pearson, who found the notebook through his interest in early gay literature, says it is the earliest known Crowley manuscript.

Explicitly homoerotic and often sadomasochistic – “A sailor’s kiss is branded on my throat/ Where his teeth infamous bit hard the skin” – the poems would have been unprintable when written, says Pearson, and only two have ever been published.

However, he is intrigued that Crowley had spared the collection of eight sonnets, including “He, who seduced me first” and “I, who am dying for thy kiss”, and six other poems, all written in pencil in a cheap palm-sized notebook bought in Amsterdam, when he destroyed all his other early poetry.

“He destroyed the poetry because he was the priest, the master, the leader, and it didn’t suit his image to be seen as weak and vulnerable. But he kept this little book all his life, so the poems obviously meant a great deal to him,” Pearson adds.

The book will be for sale at the fair, priced at £12,500. “It’s one of those distillates of history that tell us so much more than the official version,” he says.