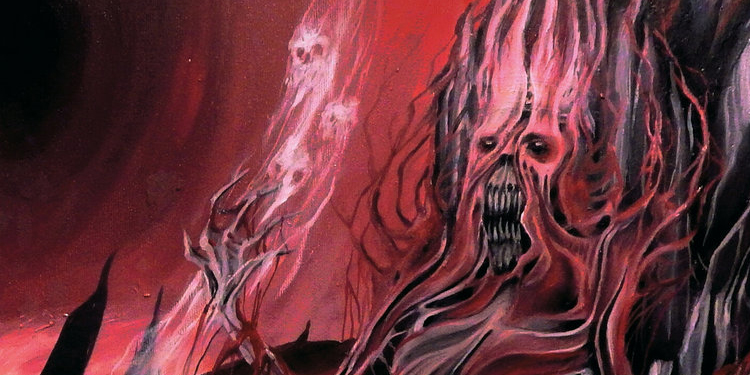 The corpse of old-school death metal still looms large over the metal scene, a number of years after the new wave of old-school death metal trend washed back into the underground like the raw, putrid sewage it was meant to be. Suitably underground, intense, and Scandinavian-influenced, another set of landmark releases comes out this year from bands better-known for being staples of the new wave of osdm trend. One of those bands is Profanal and their full-length album for Iron Tyrant Records is a nihilist bombast of raw, heavy as f*ck osdm that will clear away the rubble of trend-waste left over from the demise of the new wave of osdm trend that dissipated years ago.

Thank labels like Iron Tyrant for keeping the faith in their music strong, because Profanal’s Supreme Fire is just that – intense, well-played, and one of the most vibrant and relevant releases for osdm fans this year. The trend may be all but over, but osdm fans won’t want the best of those new acolytes to die a truly tragic demise. Together with Brutally Deceased, who are also releasing a full-length album this year, Profanal waste no runtime on half-hearted gimmicks certain to turn away fans of the band. It certainly has been a while since the band released their prior album Black Chaos, but Supreme Fire sees them stepping it up with intensity and songwriting chops to exceed steep expectations. I will repeat myself for the sake of fans who are slow to react – Profanal’s Supreme Fire is one of the sub-genre’s best incarnations in 2016 and beyond. Profanal are armed and ready for an assault on all osdm-drenched eardrums.

The many riffs that comprise each song sound carefully selected, and there’s not a single transition that’s wasted on sub-par musicianship. The songwriting dynamics are impressive on Supreme Fire, as the songs always build to a climactic conclusion that satisfies completely. Really, if you dig bands that play hokey-pokey experimental metal full of tricks that don’t complement their core sound, or play competent atmospherics but fail considerably at playing satisfying metal, this album is like a monolith cascading down a mountain slope headed for your campsite.

Really, what’s an intelligently-rendered 800 word review going to articulate to metallers lambasting their musical tastes when the proof is in the stream on this page? If you don’t get your head bopping to this, consider that you might be suffering from a serious neck injury, one that causes extreme paralysis. There’s no sax parts on this record to ignite debate about how avant-garde an album is supposed to sound. There’s unearthly growls, Boss HM-2 pedal-reinforced buzz saw guitar, deep staccato-plucked bass, and drums that keep time beautifully. Everything is precise in execution and raw vigor. That is what Supreme Fire sounds like. If you don’t think so, consider getting your hair done if you guarantee you won’t headbang along. There’s no accounting for deafness. Chord transitions gallop along d-beat on occasion. At times blasts temper the songs at robust, herculean moments in the songwriting dynamics to send the energy to the apex level. Clearly, death metal was never meant to die an austere death in the hands of fans who support mediocre efforts. If you love osdm, there can be no better example of ferocity and songwriting nuance than Profanal’s Supreme Fire. I won’t name highlight tracks as all tracks prove equally combustible, perhaps except the acoustic guitar interlude that provides listeners respite half-way through the album. The vocals are untouchable, and the guitarist sets his instrument on fire. The bass rumbles and the drumsticks resound like lightning bolts. All things said, Cvlt Nation never embellishes on a record so dismal as to misrepresent all of metal music in general. We didn’t then and we won’t start now. Get a copy of this album now or get the f*ck out!